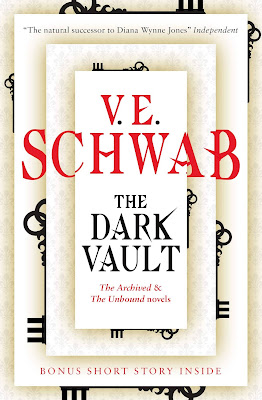 The two novels from The Archived Series appearing together for the first time.

Imagine a place where the dead rest on shelves like books.

Each body has a story to tell, a life seen in pictures only Librarians can read. The dead are called Histories, and the vast realm in which they rest is the Archive.

Mackenzie Bishop’s grandfather first brought her here four years ago, when she was twelve years old, frightened but determined to prove herself. Now her grandfather is dead, and Mac has grown into what he once was: a ruthless Keeper, tasked with stopping often-violent Histories from waking up and getting out. Because of her job, she lies to the people she loves, and she knows fear for what it is: a useful tool for staying alive.

The Archived Series:
The Archived
The Unbound
Leave the Window Open (Short Story)
The Dark Vault (bind up containing all 3 stories in The Archived series)

Review:
The Dark Vault is a bind up that contains all three stories in Victoria Schwab's Archived series together in print for the first time. I'm going to review each of the stories separately but this has been a really fun series to read so it's one I'd definitely recommend trying. 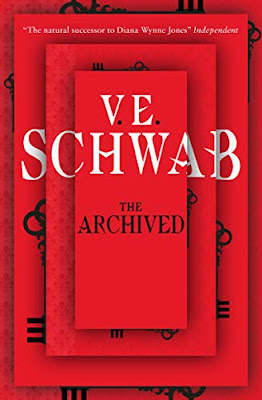 Imagine a world where after you die a kind of copy of your soul is taken to the Archive to be kept as part of the world history. These copies, also known as “Histories”, contain all of your memories and thoughts but they aren’t real people so they are kept unconscious in special drawers a bit like books on a shelf. Occasionally these Histories wake up and escape from the library and it’s at that point where Keepers, like Mackenzie, are called in to capture them and bring them back to the Archive.

Being a Keeper is a dangerous job and it can be really difficult to juggle its challenges alongside real life, especially as Mac isn’t allowed to tell anyone about the Archive or her role in it. It gets really hard to explain her constant disappearing act to her parents but the whole family is already in crisis since the death of her brother and this is just one more way they’re falling apart. As Mac finds herself having to deal with more and more escaped Histories she starts to question everything she thought she knew about the Archive but she has help from a fellow Keeper to try and figure things out.

I have no idea where Victoria Schwab gets her ideas from but I love how completely different each of her series are from each other. You never know quite what to expect from one of her books and I love it when an author can keep me on my toes by constantly surprising me! I don’t think I’ve ever read anything quite like The Archived before, the world she has created is totally unique and really intriguing so I can’t wait to continue the series.

This story focuses a lot on grief, it’s not been long since Mac lost her younger brother and it was really hard to see how badly that has affected her entire family. They’re all dealing with it, or not dealing with it as the case may be, in their own ways and that side of the story felt incredibly realistic. Mac is also dealing with the loss of her grandfather, the man who introduced her to the Archive and who was the rock who she had always been able to turn to in the past. She’s a bit adrift at the beginning of the story and makes some stupid decisions because of that but she was always relatable and easy to root for. I still have a lot of questions about the Archive in general and think there are a lot of secrets still waiting to be uncovered so I’m really looking forward to continuing the series. 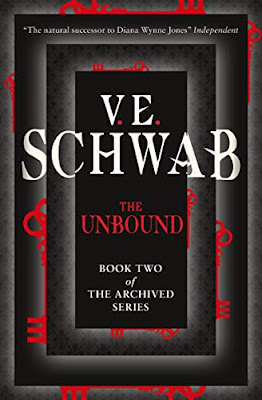 The Unbound picks up Mac's story a few weeks after the end of The Archived. She's still traumatised from everything that she went through and suffering with nightmares and flashbacks about what Owen tried to do to her. Mac is in a very fragile state emotionally and I thought Victoria Scwhab handled her PTSD very well. She's afraid to sleep because of the nightmares, she's nervous about walking into the Narrows to carry out her job of Keeper and she's having a very difficult time convincing her parents that there is nothing strange going on.

As if that wasn't bad enough she's been put on warning my the Librarians and if they decide she's not capable of doing her job they'll have no qualms about wiping her memory and kicking her out of the Archive. When she finds out about a series of disappearances she realises they all have one thing in common, Mac was the last person to have contact with them before they disappeared, and now her paranoia only gets worse.

I think I enjoyed this story even more than the first one, I was glad that Mac was suffering with real life consequences to everything that had happened. I was also pleased to come across YA parents who actually take an interest in their child and notice when she disappears at odd times with no warning. It makes things more complicated for Mac but it was so much more realistic because of that.

I don't think I mentioned it in my review of the first story but I also really love Wesley, he's another Keeper so he knows all about Mac's secret life and he's the one person she can be completely open and honest with about what is going on. I did find it really frustrating that Mac continues to keep secrets from him and from her librarian mentor Roland but I could understand why she was trying to deal with her problems on her own. I still think she would have figured out things a lot sooner if she'd had their help though and hopefully she's learned her lesson from that.

Leave the Window Open is a short story told from Wesley's point of view that you can read for free on Victoria Schwab's website here or find in The Dark Vault bind up of The Archived series. The story won't make a lot of sense if you don't read The Unbound first but I loved getting a glimpse inside Wesley's head. He's just so cute and I love his relationship with Mac. Plus we FINALLY get to find out his real name & it was worth waiting for!

Paperback Bind up of the series / Both stories are available separately on Kindle: