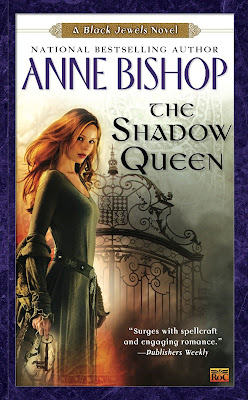 In a tumultuous world ruled by witches and warlocks who wear their power as jewels, one Queen’s chance at redemption is the last hope for a desperate people in this novel set in the world of the Black Jewels...

Theran Grayhaven is the last of his line, desperate to restore the land of Dena Nehele. But first he needs to find a Queen who knows Protocol, remembers the Blood’s code of honor, and lives by the Old Ways.

Languishing in the Shadow Realm, Lady Cassidy is a Queen without a court, a castoff. But when she is chosen to rule Dena Nehele, she must convince bitter men to serve once again.

Theran’s cousin Gray is a Warlord Prince who was damaged in mind and body by the vicious Queens who once ruled Dena Nehele. Yet something about Cassidy makes him want to serve—and makes him believe he can be made whole once again.

And only Cassidy can prove to Gray—and to herself—that wounds can heal and even the whisper of a promise can be fulfilled...

Review:
The Shadow Queen introduces us to Theran Grayhaven, the last of Jared and Lia (from The Invisible Ring)’s bloodline. Set a couple of years after Jaenelle cleared the taint caused by Dorothea, and killed many of the Blood of Terrielle in the process, we see Theran trying to rebuild Dena Nehele but he’s in desperate need of a Queen who knows the old ways of the Blood to help him. Since there are no Queens strong enough left in Terrielle he turns to Daemon for help in the hope he can persuade a Queen from Kaeleer to help him.

Lady Cassidy may only have a Rose jewel but she has all the knowledge Theran needs to help set up a new court at Dena Nehele and she’s the only Queen who doesn’t already have a court of her own. Cassidy is nervous about travelling so far from home and worried that Theran’s people won’t accept her but she knows she is their only hope so she agrees to serve as their queen for a year hoping that will be enough time to teach them protocol.

I absolutely loved this book, we get to see some of my favourite characters again which is something I can never get enough of, but I also really loved getting to know Cassidy and most of the people we meet at Dena Nehele. I have to admit I was more than a little annoyed with Theran by the end of the book, he is disappointed when he first meets Cassidy because he wanted a Queen who was not just more powerful but also more beautiful so he never seems to fully support Cassidy no matter how hard she works to prove herself. Luckily Theran seems to be the only member of her court who is quite so stubborn and the other characters made up for his bad attitude. I particularly loved Gray, someone who suffered unbearably when Dena Nehele was ruled by Dorothea’s pet queens but who is able to look past his fears and see Cassidy for who she really is. I’m totally rooting for a romance between Gray and Cassidy and at the moment I’d be quite happy for Gray to overthrow Theran to get him out of the picture completely!

I’m really looking forward to reading more of Cassidy’s story in Shalador’s Lady and I know this whole series is one I’m going to revisit time and time again in the future.