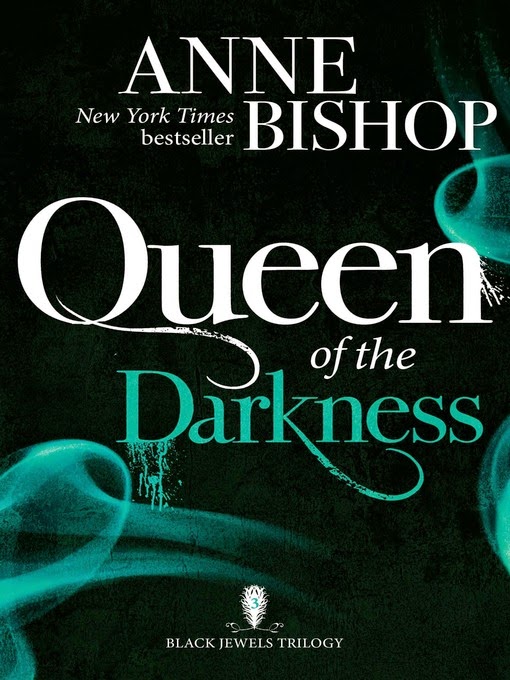 A taint now creeps across most of the Blood - those born into power - bringing war to the Shadow Realm, Kaeleer.

In the face of such corruption, Jaenelle, the Witch Queen who rules the territory, is powerless to prevent its spread. Especially while her chosen consort - and the person needed to complete the prophecy - Daemon, remains lost.

But the Dreamweavers' webs show two paths. One will see the blood of millions spilled, the other will see the taint destroyed, and only one person need die: her.

Review:
I have been absolutely addicted to Anne Bishop's Black Jewels trilogy ever since I discovered Daughter of the Blood and after the huge changes at the end of Heir to the Shadows I couldn't wait to start Queen of the Darkness. This book was everything I'd hoped it would be and then some and I didn't want to put it down for a second. I can't believe how much I've come to love these characters and I'm was so incredibly invested in their stories that I desperately needed to know what would happen to them all. I'm going to assume that if you're reading this review you've already read the last two books so although this review will be spoiler free for Queen of Darkness I will be discussing events in previous stories. If you don't want to see these spoilers then look away now but before you go I will tell you that the Black Jewels trilogy is one of the most complex, compelling and utterly addictive fantasy series that I've discovered in a long time and if it's one you haven't started yet then you're seriously missing out!

Still with me? Well, in that case I'm going to assume you're already an Anne Bishop fan and high five you for loving the series as much as I do! At the end of Heir to the Shadows we saw Jaenelle claim her territory so that she was able to protect her Kindred friends. Jaenelle now has a court of powerful Queens, Warlords and Kindred who would all do anything for her but she takes that responsibility seriously and will protect them with her life if needed. I have loved seeing Jaenelle grow into her power, she really is an incredible character and after so much suffering in her life she has now become a strong and confident young woman. I actually feel very proud of everything that she has achieved and I couldn't wait to see her figure out how to deal with the enemies who have done everything they could to destroy her.

One of the things that I was most excited about was seeing her reunited with Daemon. I missed his presence in the last book but I understood why that distance was needed, he has suffered enough though and it was time to see both of them find a way to happiness. Daemon has finally found his way out of the Twisted Kingdom and taken his place at Jaenelle's side as her consort but it is a role in name only as the two of them struggle to communicate their wants and needs to each other. I really enjoyed seeing someone as experienced as Daemon so unsure of himself, he loves Jaenelle so much and is terrified of putting pressure on her but as inexperienced as she is she has no idea how to make the first move. It was great seeing Saetan, Lucivar and the others help the two of them work through things and I loved seeing them all spending time together building or rebuilding their bonds. Things between Saetan and his sons are incredibly complicated but we get to see them slowly get to know each other and learn to trust themselves.

Jaenelle is the most powerful Witch born in thousands of years and she can feel the evil that is trying to destroy all three realms. She knows what has to be done to stop it and she knows that she will pay the ultimate price but that is something she is willing to do to protect the people she loves. Her friends aren't quite so willing to let her bear that cost though and they are determined to find another way. The love that all of these characters have for her is absolutely heart warming but I've also thoroughly enjoyed seeing the friendships build between them as individuals and getting to see some of my favourite characters find love and happiness in their own right.

I don't want to say too much more about what happens in this book because I think it's much better if you can enjoy the journey for yourself. I will say that I absolutely loved every minute of this book. This entire series has taken me on an emotional roller coaster, one where I've both laughed and cried. There have been times when I was so mad that my blood was boiling and others where I felt emotionally drained and exhausted but I have also fallen in love and met some of the most fantastic characters - ones who will stay with me for years to come. I can absolutely guarantee that this is a series I'll return to again in the future and I'm glad that I've still got some short stories set in the same world to devour before the journey is completely over. I may be a fairly new fan of Anne Bishop but I'm now a die-hard one and I can't wait to discover more of her books!