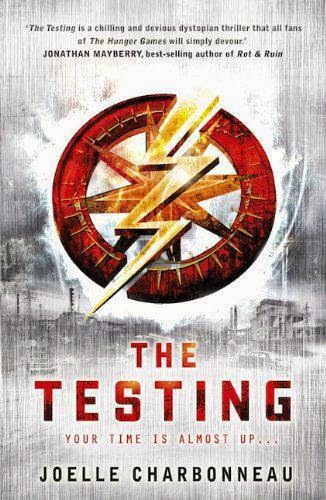 Do you possess a winning combination of knowledge, practical skills and raw intelligence?

Do you have what it takes to lead others?

Are you willing to crush those who stand in your way?

Every year, the United Commonwealth invites top graduates from each colony to participate in the testing. Successful candidates will go on to the university and help the government rebuild our war-stricken world.

This process is not optional.

Disclaimer: The United Commonwealth is not responsible for candidates' psychological or physical health during The Testing.

Review:
I'd heard a lot of good things about The Testing but I have to admit I was sceptical before I picked it up. Any time I see a book compared to the Hunger Games I'm automatically wary that it won't be able to live up to my expectations but I'm very happy to say that wasn't the case here. In fact I think I might have enjoyed it even more than HG! There are similarities between the world that Joelle Charbonneau has created and both HG and Divergent but she has still managed to create a unique story that stands out amongst the plethora of dystopian books currently on the market. This is an exciting trilogy and one I'm incredibly relieved is already finished so I'm not going to have any horrible long waits between each book.

Cia lives in a world that was torn apart by nuclear war, what remains of the United States - now known as the United Commonwealth - has been divided into colonies that are all tasked with rebuilding the area they live in, working to make the land habitable again and to find ways to combat the radiation that is a constant risk to their lives. The brightest students from each of the colonies are invited to take part in the Testing, it is one of the only ways they'll get a chance to leave their home and travel to other areas and the only chance they have of studying at the university. People who take part in the Testing go on to become leaders and it is a great honour to be chosen. Cia comes from Five Lakes, one of the smaller and lesser known colonies where nobody has been chosen for the Testing in years. Cia has always dreamed of being able to take part though and she has studied hard to make the grade.

Along with three other members of Five Lakes Cia is chosen to take part in the Testing and she is thrilled to be given this chance to represent her colony. It isn't long before she starts to discover that she hasn't been told the truth of things though, the Testing is far more brutal than she could ever have imagined and most of the participants won't even survive the challenges they face. Cia will face daunting tasks but failure won't be tolerated and the only way to leave the competition if you aren't one of the winners is in a body bag. She must try to figure out who she can trust so that she can build alliances with fellow candidates but is anyone really what they seem? If it's a matter of life or death can she really trust anyone?

The Testing is an incredibly fast paced story that is full of shocking twists and turns that kept knocking me sideways. I was never 100% sure where things were going to take Cia next and I found myself constantly second guessing people trying to decide if they were trustworthy or not. Cia is such a fantastic character, she is smart and she actually knows how to use her brain, that's right, for once we have a female in YA who is intelligent AND who doesn't loose her brain because she's gone gooey eyed over a hot love interest. She wants to see the best in people but she doesn't let that blind her to the possibility of betrayal. That doesn't mean she's perfect, she does make mistakes and occasionally puts her trust in the wrong people, but in general she is able to survive on her wits rather than by letting other people pull her through.

I enjoyed the beginnings of romance between her and Tomas but what I loved most about it was the fact that it never felt forced or rushed. They both grew up in Five Lakes so there is a bond between them that comes from being familiar with each other but it still takes time for them to trust each other fully. They form a strong friendship throughout shared ordeals and they prove to each other time and time again that they have each other's backs. I was totally invested in their friendship and am hoping to see that build into something more as the series continues.

This story stands out in a crowded YA dystopian market and it's a series that's reignited my excitement for the genre. I'm incredibly excited to see how the series progresses and if the next two books are anywhere near as good as this one I'm going to have a new favourite on my hands. Joelle Charbonneau has definitely been added to my list of authors to watch out for!

Source: Received from Templar Publishing in exchange for an honest review