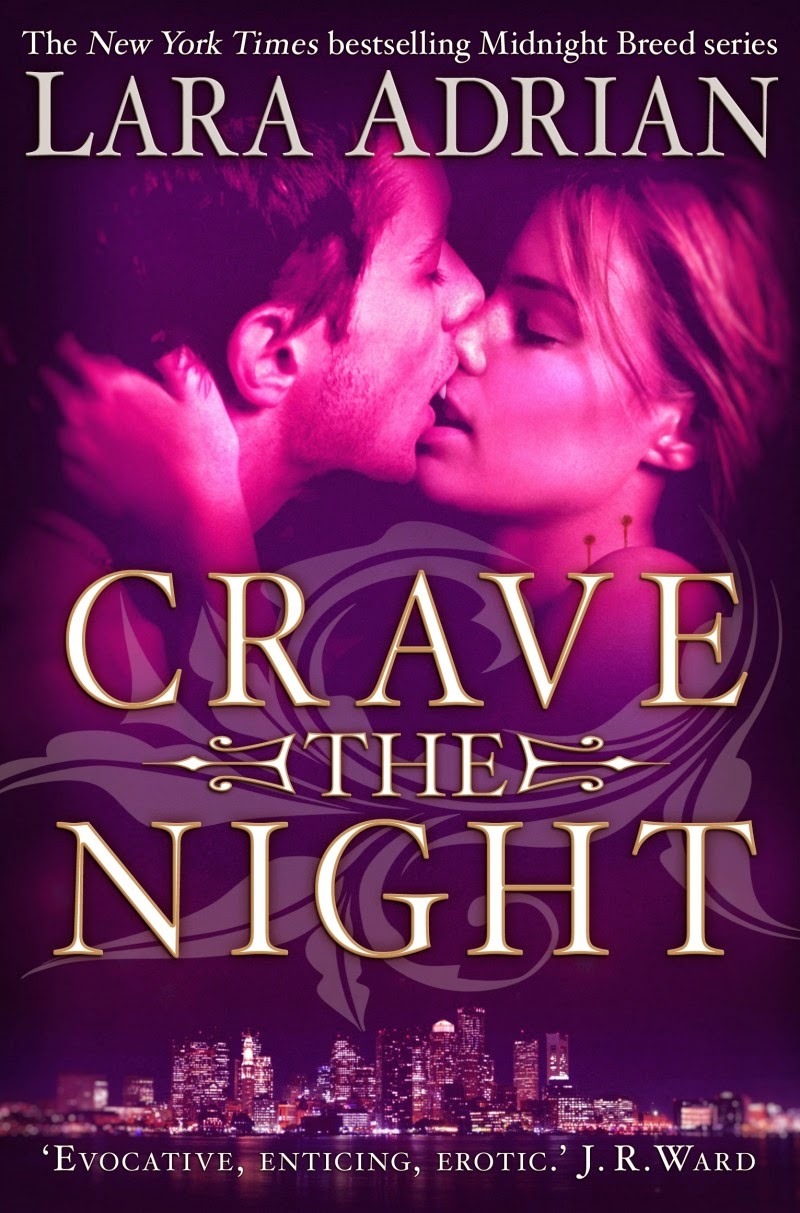 She has no choice but to seek shelter in his arms . . .

Ice-cold breed warrior Nathan is on a mission for the Order to expose the members of a secret cabal called Opus Nostrum, comprised of both human and Breed members. But Nathan's allegiance to the Order is challenged when his pursuit leads him to Martin Gates, the wealthy patriarch of a high society Breed family, and the father of ethereal Jordana Gates, a woman far out of Nathan's league and one he craves like no other.

A few weeks before the couple shared an unexpected, stolen kiss . . . a kiss that Nathan is unable to forget. And soon Nathan and Jordana are swept into a passion that will force him to choose between duty towards his Order brethren, and desire for the one woman he cannot resist.

Review:
I am such a huge fan of Lara Adrian and the Midnight Breed series, it was one of the first paranormal romance series I discovered and in my opinion it's still one of the best. Book 10 (Darker After Midnight) was a massive game changer and I have to say I'm loving the new direction that the series has taken since then. I'm enjoying getting to know the new younger generation but I'm happy that we still get to see regular glimpses of the original couples. I'm also glad that we now have an explanation about where the Breedmates come from and what makes them so different to other humans. There is so much more that we have yet to uncover though and I'm glad that the series doesn't seem anywhere close to coming to an end.

Fans of the series will already be familiar with Nathan, he is Corrine's son and he was raised in one of Dragos's labs to be an assassin. Although Corrine and Hunter rescued him when he was 13 and he has been raised by them and the Order ever since Nathan is still mentally scarred by the torture inflicted upon him as a child. He was conditioned to show no emotion and to always ruthlessly follow orders and that is something he has never had trouble doing now that he is a fully fledged member of the Order who is in charge of his own squadron. Nathan is a Gen One Breed male which makes him incredibly powerful physically but he also has a strong will and determination to protect his brothers in the Order and to fight alongside them to protect the rest of his race. When he finds himself attracted to Jordana he is completely thrown off balance, he is so used to being able to push his feelings to one side but he can't seem to do that when it comes to her. Jordana is all he can think about and it's causing him to make mistakes in his job, something he can't forgive himself for.

Jordana had a privileged upbringing, she was raised in the Darkhavens by her adopted father and she has always been spoilt and cosseted by him. She isn't a weak willed female though, she has fought hard to gain her independence and wants to be allowed to make her own choices. She feels stifled by the expectations her father has for her, he wants to see her settled and mated but the man he is encouraging to pursue her isn't someone that she has feelings for and the last thing Jordana wants is to be stuck with a permanent bond to someone that she doesn't love. Nathan is everything she has always been told that she shouldn't want in a man, he isn't a sophisticated, wealthy male who is part of the Darkhaven elite, instead he is a dark, dangerous and brooding warrior. But Nathan gets her blood boiling like no other and she finds it impossible to resist temptation.

I really liked Nathan and Jordana as a couple, in a lot of ways they are opposites but they bring out the best in each other and I enjoyed seeing them work out their differences. I loved how dominant Nathan is, in fact I think he might just be the most dominant Breed male we've met so far which is saying something really because this series is full of hot alpha heroes! Nathan's upbringing has left him always needing to be in control and that shines through in every aspect of his character, especially when it comes to his sex life. Jordana does bring out a softer side to him but even with her he finds it difficult to let go of the reigns. Their romance has some incredibly sweet moments but it is also full of heat and sexual tension. You won't be disappointed when they give in to their desire!

I don't want to say too much about the rest of the plot but there are some very interesting developments after the thwarted attack by the Opus Nostrum terrorist group in the last book. We find out a little more about the Atlanteans and it definitely has me curious to see what will happen next. I enjoyed spending more time with the rest of the younger generation, I was slightly disappointed that we didn't see more Mira and Kellan but I already love Carys chase and I'm really hoping we don't have to wait too long for her story. I'm also hoping that Zael might be a character we get to see more of as the series continues, I have a feeling he could be quite important in the upcoming battle with their new enemies. If you're a fan of the series I'm sure you'll love Crave the Night, the only disappointment is that I've not got to sit around waiting for the next book to be published!

Source: Received from the publisher via Edelweiss in exchange for an honest review but I've already purchased a copy to take pride of place on my shelves with the rest of the series.