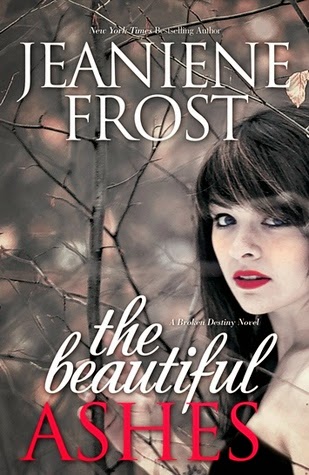 In a world of shadows, anything is possible. Except escaping your fate.

Ever since she was a child, Ivy has been gripped by visions of strange realms just beyond her own. But when her sister goes missing, Ivy discovers the truth is far worse—her hallucinations are real, and her sister is trapped in a parallel realm. And the one person who believes her is the dangerously attractive guy who's bound by an ancient legacy to betray her.

Adrian might have turned his back on those who raised him, but that doesn't mean he can change his fate . . . no matter how strong a pull he feels toward Ivy. Together they search for the powerful relic that can save her sister, but Adrian knows what Ivy doesn't: that every step brings Ivy closer to the truth about her own destiny, and a war that could doom the world. Sooner or later, it will be Ivy on one side and Adrian on the other. And nothing but ashes in between . . .

Review:
As a huge fan of Jeaniene Frost's Night Huntress series I have had The Beautiful Ashes on my wish list ever since I first found out she was writing a new adult urban fantasy series. In fact, I'd go so far as to say that this was probably one of my most anticipated reads of the year so I can't even tell you how excited I was to get my hands on a review copy! This is quite a departure from the Night Huntress books though and Jeaniene Frost has created a fascinating new world full of demons living hidden amongst us preying on unsuspecting human victims.

Ivy has suffered from horrifying hallucinations for her entire life, her parents have tried everything to help her but no amount of therapy or medication was able to stop them. In the end Ivy pretended that they had stopped just so that she would be allowed to live a normal life, well as normal as possible considering she sees monsters everywhere she goes. Ivy always thought she was crazy and she definitely never believed that her visions were real but when her sister Jasmine goes missing and her parents are killed she suddenly finds herself faced with her worst nightmares. Not only are the monsters real but they have taken Jasmine. Ivy is determined to do whatever it takes to rescue her sister but she isn't going to be able to do it alone and she desperately needs the help of mysterious stranger Adrian. The trouble is that she knows Adrian is keeping secrets and she isn't sure if she can really trust him to have her back.

While I liked this story and am definitely intrigued enough to want to carry on reading the series I have to admit I was a little disappointed in this first instalment. I just had such high expectations for this book and it didn't quite manage to live up to them which was a shame. There was a lot to like about the world building though and for the most part I liked both of the main characters but it missed that elusive spark that takes a story from a good one to an amazing one.

Ivy is thrown completely out of her depth when her sister is taken but she handles herself quite well and I liked seeing her determination to get to the bottom of what was happening. For the most part she is quite a strong character, she does have a few meltdowns but considering everything that she uncovers in such a short period of time I'd say she was entitled to them. I liked Adrian too, he was a decent guy who had good reasons for keeping his distance from Ivy once he realises who she is. What I found incredibly frustrating was his refusal to answer any of her questions or to give her any information about what was happening to her. There were times when her life was needlessly placed in danger because he just hadn't bothered to explain why certain things need to be avoided. It was infuriating and if they could just have had a proper conversation she would have been much more aware of the dangers and less likely to fall into a trap set by the demons.

I liked the chemistry between Ivy and Adrian but I did feel that they fell for each other just a little too quickly. I would have liked more of a slow build between them, especially since this is just the first book in a series, and it would have made things more believable considering how many secrets Adrian was keeping. In spite of the issues I did still enjoy The Beautiful Ashes, the world is interesting and I'm very curious to see how things will play out as the series continues.