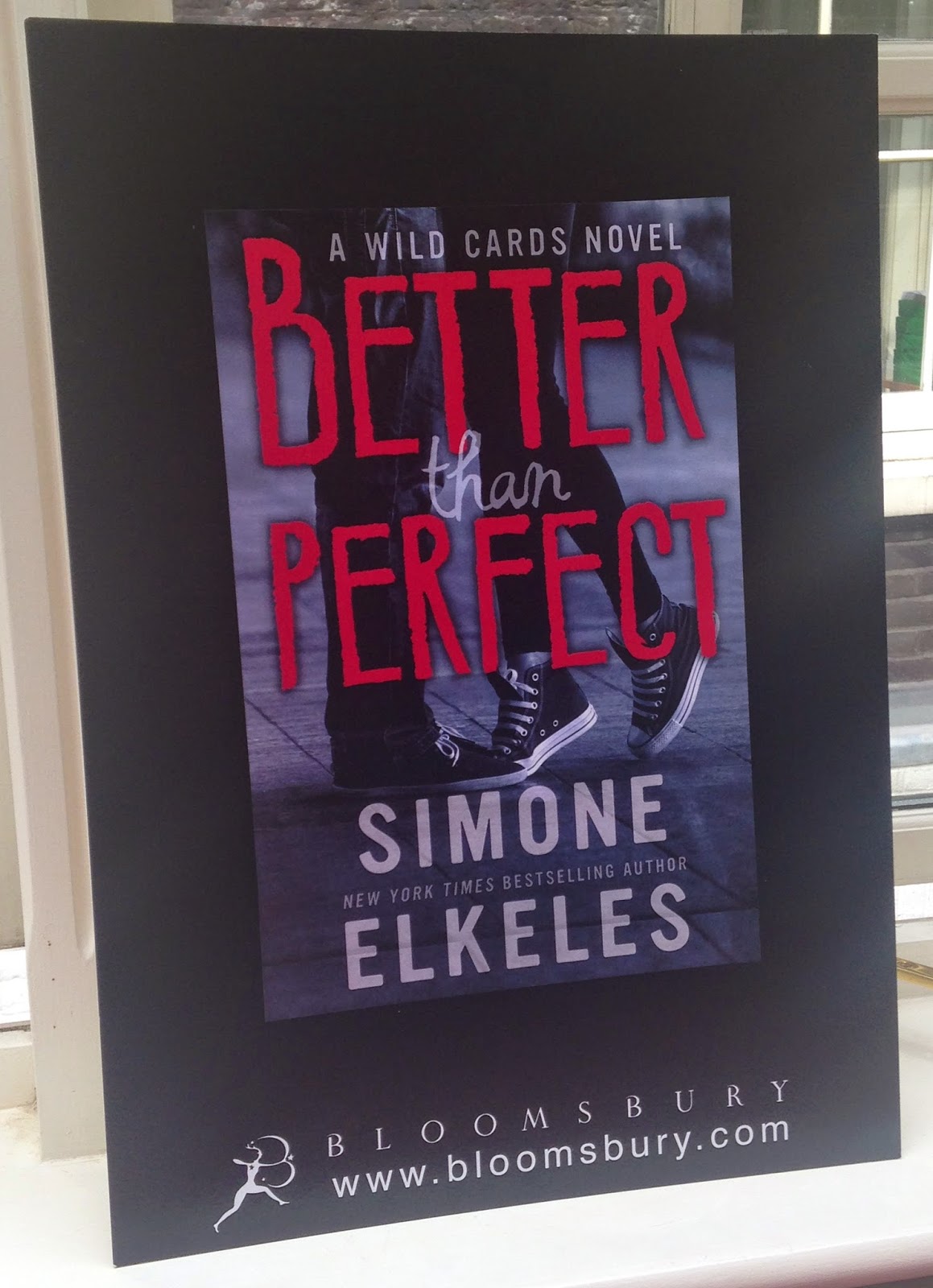 I can't tell you how excited I was to be invited to the Bloomsbury offices a few months ago to meet and interview one of my favourite authors Simone Elkeles. She was in the UK for a couple of days to talk about her latest novel Better than Perfect which is released in paperback in the UK today and I was thrilled to get the chance to chat with her about the book and the whole Wild Cards series.

When I first arrived at the Bloomsbury office I was able to spend some time talking to Simone one to one and I can't even begin to tell you how lovely she is. She is so completely down to earth, friendly and incredibly funny to chat to and the time seemed to whiz by in an instant. Luckily I was still able to get answers to most of my questions though!


First I wanted to ask Simone what she thought about the fact that the book title had been changed from Wild Cards to Better than Perfect. She told me that Perfect Chemistry initially sold as a one book deal (even though she had plotted out the entire trilogy) so when the book was a success and she was able to continue writing the remaining books the series became known as the Perfect Chemistry trilogy. Her publishers were looking to do something similar with the Wild Cards series and wanted a short, punchy title for the first book so it could also be used as the series name. After publishing Wild Cards as an ebook they discovered that a lot of readers were finding the title misleading and thinking it was a series about playing poker or card games. In the end they decided to keep Wild Cards as the series name but re-release the first book as Better than Perfect to make it clearer that it's a romance. Simone was a little concerned that readers who have already read the story as Wild Cards might end up buying it twice so she wanted it made very clear on the cover that the book was a re-release to avoid confusion.

Better than Perfect is a dual narrative story told from the point of view of both Ashtyn and Derek and I was very curious about whether Simone found one character's POV easier to write than the other. She said that she has always found boys easier to write than girls, mainly because she has a lot of male friends and finds them much easier to connect to in real life. When her publisher first suggested writing a dual narrative for Leaving Paradise she was really nervous about it but now she loves writing her stories that way and will probably never go back to writing from a single POV. Simone mentioned a book called Flipped by Wendelin Van Draanen that she said was the first book that really showed her how to write a dual narrative story.

All of Simone's characters contain a little bit of her, she is a joker who loves to play tricks on people (although she doesn't like having jokes played on her!) and she tries not life too seriously which comes out in Derek but she also has a lot of pain from the loss of her father and that was the inspiration for Derek losing a parent at a young age too. Losing a parent destroys a piece of you and she said that she is always thinking about whether her father would approve of what she is doing now which is something she and Derek both have in common. Ashtyn is a guy's girl which is the same as Simone, they both have a lot of fighting spirit and won't let anyone take advantage of them. The only character who doesn't have some part of Simone's personality is Maggie from the Paradise series who was the hardest character Simone has ever had to write. Maggie tends to feel quite sorry for herself and has a woe is me attitude which is something Simone tries really hard not to do herself so she really struggled with Maggie's character. It isn't until the second book when Maggie started to channel Simone's fighting spirit and she became a bit easier to work with.

I really wanted to ask Simone about the inspiration for having Ashtyn be part of the boy's football team (for my fellow Brits I'm of course talking about American football here not soccer LOL). When I mentioned that I was surprised that Ashtyn had been allowed to play Simone told me there here is a fairly new American law called Title Nine that says if there isn't an equivalent girls team then girls must be allowed to play on the boys team. In fact her daughter's school now has a female kicker on their football team and they are starting to see more girls playing football with the boys even in the bigger leagues. Simone said she really wanted to try out for football when she was at school but was afraid to because none of her female friends would do it with her and now she really regrets that she didn't give it a try. Simone is very proud that her daughter has followed her own dream to play ice hockey - she is a goalie and the only girl on her team. The rest of the team treat her like one of the guys but they're also very protective if anyone gives her any trouble. Hockey can be even more dangerous than football and Simone's daughter was still recovering from a recent concussion.

When I asked Simone about the fantastic chemistry she creates between her characters she told me about falling in love herself as a teenager. She experienced that real Romeo and Juliet kind of love where the highs were amazing and the lows made her feel like she wanted to kill herself. Not everyone gets to experience that kind of love but she tries to get her characters go through it. She wants to give readers goosebumps, she wants us to laugh with her characters, cry with them, feel their pain and their love. She also wants us to feel turned on when they're turned on - she loves being able to write steamy stories!

As I'm sure you can imagine I had an amazing time chatting with Simone and I haven't even shared half of the things we talked about. I wish I could have videoed the conversation and shared it with you that way because there is no way I'd ever be able to capture her humour in writing.


After my interview with Simone we were joined by Becky from The Bookette (who had also had a chance to interview Simone) and Charli from Bloomsbury had a little game for the three of us to play. When you read Better than Perfect you'll discover that Ashtyn is completely addicted to Skittles but she has a very interesting reason for not eating the purple ones. So in Ashtyn's honour Bloomsbury thought it would be fun for us to have to pick out 10 purple skittles from a bowl using just a pair of chopsticks!


Now Becky and I had actually been given a few minutes to practice before the contest started but it's still incredibly hard to do - those skittles are surprisingly slippery when you're trying to grab hold of them with two twigs LOL. We had a lot of fun trying but I think it's fair to say that Simone completely outdid both Becky and myself and was the clear winner of the competition!


I dare you to try this at home with your friends - it will lead to a lot of giggles and you may have to watch out for low flying skittles! Bloomsbury made this fab little video of us all where you even get a quick glimpse of Becky's fab two handed, four chopstick technique!

After the contest it was time for a little party to celebrate the UK publication of Better than Perfect. Of course it's not a proper publishing event without cakes so we were all completely spoiled with cupcakes, bubbly and of course another bowl of skittles!


I'd like to say a huge thank you to Simone for being so much fun to talk to, it was absolutely fantastic to meet you and I'm now an even bigger fan than I already was! Of course I also want to say a huge thank you to everyone at Bloomsbury (especially Charli and Emma) for inviting me to their office, plying me with skittles and cupcakes and sending me home with a wonderful goodie bag full of books! I had such a fantastic morning and can't thank you all enough :o)
at 09:00