Review: Take Me Under - Rhyannon Byrd 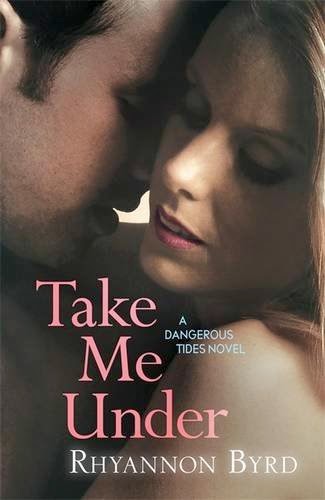 Ben Hudson - a Miami detective with a bad boy reputation - fell for shy, sexy and married Reese Monroe from the moment he first saw her three years ago. Now Reese is divorced and renting a Florida beach house - which happens to be owned by Ben - and he can't get his new neighbour out of his mind.

For Reese, Ben's sudden advances are thrilling but leave her stunned; she never expected a man with such a wicked reputation to pursue her. She knows she should be on her guard, but he's a temptation she can't resist. And when trouble follows her from Boston, threatening her life, Ben may be the only one who can help her . . .

Dangerous Tides Series:
Take Me Under
Make Me Yours (Novella in the Wicked and Dangerous anthology)
Keep Me Closer

Review:
Ben has had a thing for Reese ever since he saw her at a party 3 years ago, he's seen her at many family events since then and his feelings have just grown stronger but there has always been something getting in the way of him making a move - the little fact that she was already married. When he found out that she was getting a divorce and moving back to the area he went out of his way to make sure they'd be able to spend time together and he's determined to finally make his move. Reese is shocked when she realises her new landlord and the guy living next door is Ben, she hadn't expected to see him again and had no idea that he was interested in her. After her ex Reese is wary of letting another man into her life but when Ben makes it quite clear he's looking for fun not a long term relationship she can't resist the chemistry that flares between them.

Take Me Under is the first book in the Dangerous Tides series and it was a quick, fun read that I was able to finish in a couple of hours. Overall I'd say I liked both of the main characters but there were things about them that irritated me. Reese has spent years being belittled by her ex-husband and is very down on herself, she doesn't feel sexy or attractive and has no idea what Ben could possibly see in her. While I could understand where she was coming from I did find it a little frustrating that she had such a low opinion of herself and it didn't quite ring true that she would be able to jump into bed with Ben quite so quickly considering her previous experiences. I was also annoyed with the way Ben kept telling Reese that he didn't want a relationship but then getting irritated with her for refusing to let him spend the night. He was giving her so many mixed signals that it wasn't surprising that she didn't have a clue how to react to him!

This book has a LOT of sex and that isn't something I'd usually complain about but here I did feel that it took away from the main story a little too much. The suspense side of the story could have been so much more interesting if they had spent more time trying to figure out what was happening rather than going at it like bunnies. Reese was being stalked and spent a lot of time feeling like someone was watching over her shoulders but it didn't stop her getting down and dirty with Ben outside where anyone could be watching them and that didn't vibe for someone who was as alpha and possessive as Ben. I'm not sure if it was partly because there was just so much sex but I also found some of the terminology used and conversations they had were crude and cringe worthy rather than a turn on. It's not often that I find myself skimming over the sex scenes but that happened more than once here.

The story wasn't all bad and I was pleased with the way things turned out in the end but I do think it could have been a lot better. I did like the side characters though and I'm curious enough about Ben's brother Alex to want to try the next book in the series. If you're looking for a hot beach read with a dominant, dirty talking alpha hero then it would definitely be worth giving Take Me Under a try.