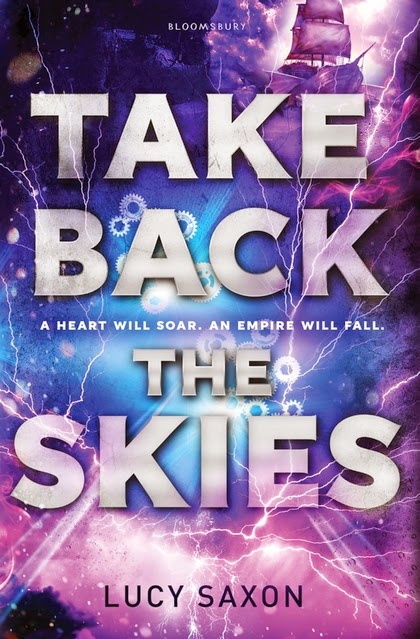 Catherine Hunter is the daughter of a senior government official on the island of Anglya. She's one of the privileged - she has luxurious clothes, plenty to eat, and is protected from the Collections which have ravaged families throughout the land. But Catherine longs to escape the confines of her life, before her dad can marry her off to a government brat and trap her forever.

So Catherine becomes Cat, pretends to be a kid escaping the Collections, and stows away on the skyship Stormdancer. As they leave Anglya behind and brave the storms that fill the skies around the islands of Tellus, Cat's world becomes more turbulent than she could ever have imagined, and dangerous secrets unravel her old life once and for all . . .

Review:
Take Back the Skies is another one of those books that has had a huge amount of hype surrounding it but unfortunately in this case it failed to live up to expectations. What makes that sadder is that there is the start of a really good story in there somewhere but it kind of ended up getting lost in the mediocre writing. I actually don't have a huge amount to say about this one so I'm going to keep this review fairly brief but if I had to describe Take Back the Skies in one word then it would have to be forgettable.

There was nothing about the characters that made them stand apart, they're all quite bland and I didn't really come to feel invested in their lives or the story. Cat has lived a privileged life because her father works for the government, she has been cosseted and spoiled but she hates the restrictions her father places on her. She is expected to act like a lady and to marry someone of her father's choosing when she would much rather live life on her own terms. You have to admire her pluck for running away from home and stowing away on an airship but from that point on everything seems to happen far too quickly and easily. The crew have been aware of government corruption for a long time but they are suddenly brave enough to do something about it when Cat comes along when they never would have attempted it before. I found it hard to believe that someone as young and inexperienced as Cat would have so much useful knowledge and be able to be the driving force behind a rebellion that adults had never dared to attempt without her.

There is a "romance" between her and fellow crew member Fox but it felt forced and completely unbelievable. He spends the majority of the book treating her badly yet within a couple of weeks she considers him the love of her life. I just didn't buy it. Then you throw in a poor attempt at a love triangle with another character who seemed particularly weak and insipid and I was about done. To be fair the author does resolve the triangle in the first book and she does it in a completely unexpected way but even though I hadn't felt invested in the romance I found the ending unsatisfactory and actually felt kind of cheated.

To give Lucy Saxon her dues she wrote this novel when she was only 16 years old and to have a book published at just 19 is a pretty impressive achievement. Unfortunately the book reads like it was written by a 16 year old and that wasn't really a good thing. The book might work better for younger readers but when there are so many amazing young adult books out there I would struggle to recommend this to anyone. I just felt like the story could have been so much more if it had gone through a harsher editing process, it just needed that extra something to take it from an okay story to a really good one. This is the first book in a series but if I'm honest I just don't care enough about any of the characters to want to continue reading about them, by the time a year has gone by I won't even remember this book's name let alone any of the plot!