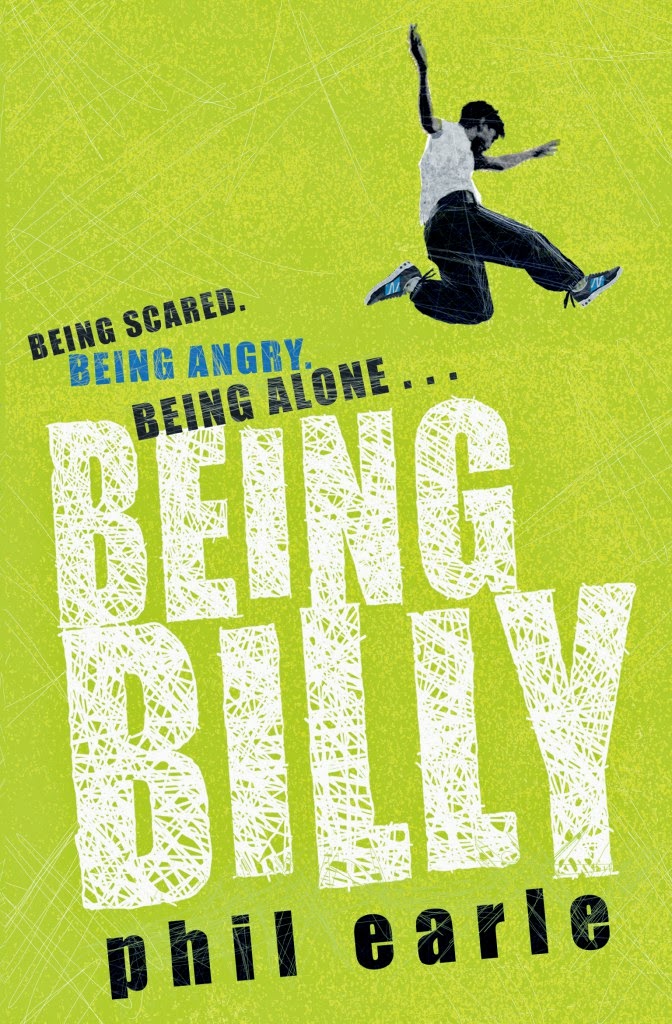 Faces flashed before my eyes.
And for every face there was a time that they had let me down.
Each punch that landed was revenge, my chance to tell them I hadn't forgotten what they did.

Eight years in a care home make Billy Flynn a professional lifer. And Billy's angry - with the system, the social workers and the mother who gave him away.

As far as Billy's concerned, he's on his own. His little brother and sister keep him going, though they can't keep him out of trouble.

But he isn't being difficult on purpose.
Billy's just being Billy.
He can't be anything else.
Can he?

Review:
Being Billy is a book that I've been meaning to read for a long time now, it's come highly recommended by most of my favourite UKYA bloggers and now that I've finally read it I can completely understand why they all rave about it. It's incredibly impressive to think that this was Phil Earle's debut novel and I'm excited that I already have copies of his next three books because I can't wait to dive into them.

Billy is an angry young man, something that isn't really surprising considering everything he's been through, he has spent eight years living in care and he feels that nobody really cares about him. The staff may act like they care but they're getting paid to look after him and he's sure they all forget about him the moment they're no longer on the clock. The only constants in Billy's life are his younger siblings, Lizzie and Louie, and Billy would do anything to make sure they are safe and cared for. He's pretty much given up on himself but he wants the best for them so when social services threaten to separate them unless he starts to behave himself he knows he's going to have to try and do something about his temper.

This story absolutely broke my heart, Billy is such an incredibly realistic character (you can really tell that the author has experience as a Care Worker) and his story really makes you think. It's painful to think of the thousands of children who are in Billy's position, children who haven't had the best start in life and who have been rejected or abused by the people who are supposed to love them the most. It's no wonder that some of these kids fight back to get attention or just don't know how to deal with their anger in a healthy way. Billy has no outlet for his feelings so his temper can be explosive but it was incredibly easy to sympathise with him.

What I loved most was seeing how Billy changes from a young man with the world on his shoulder who thinks that everyone is out to get him. It isn't easy but eventually he starts to understand that people do care about him and that they want what is best not just for him but also for Lizzie and Louie too. I also loved seeing his friendship with Daisy develop and I'm excited that we're going to learn more about her in Saving Daisy. I think the thing I probably enjoyed the most was Billy's interactions with the carer Ronnie. Ronnie was a hard taskmaster who didn't let Billy get away with anything but he took the time to build a bond between them. It was obvious how much Ronnie cared about the whole family and even though it took Billy a long time to realise that seeing the change in Billy when he finally did was incredibly rewarding. I have the utmost admiration for carers, it must be one of the most emotionally draining and difficult jobs out there but at times it must be one of the most rewarding ones too.

Being Billy is an incredible story, one that will break your heart one minute but have you laughing out loud the next. It will make you appreciate everything you've got and it might even make you think twice about the actions of some of the kids you used to go to school with. One thing it will definitely do is stay with you. I found myself thinking about Billy many times after I finished the book because he just feels so real to me, he is a young boy you could meet in pretty much any town in England and he wormed his way into my heart and made himself at home there. I can't recommend Being Billy highly enough and I can't wait to read more from Phil Earle.