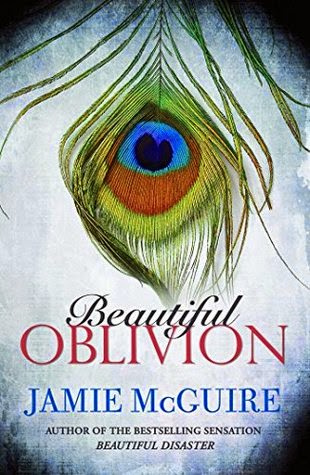 Fiercely independent Camille "Cami" Camlin gladly moved on from her childhood before it was over. She has held down a job since before she could drive, and moved into her own apartment after her freshman year of college. Now tending bar at The Red Door, Cami doesn't have time for much else besides work and classes, until a trip to see her boyfriend is cancelled, leaving her with her first weekend off in almost a year.

Trenton Maddox was the king of Eastern State University, dating co-eds before he even graduated high school. His friends wanted to be him, and women wanted to tame him, but after a tragic accident turned his world upside down, Trenton leaves campus to come to grips with the crushing guilt.

Eighteen months later, Trenton is living at home with his widower father, and works full-time at a local tattoo parlour to help with the bills. Just when he thinks his life is returning to normal, he notices Cami sitting alone at a table at The Red.

As the baby sister of four rowdy brothers, Cami believes she'll have no problem keeping her new friendship with Trenton Maddox strictly platonic. But when a Maddox boy falls in love, he loves forever - even if she is the only reason their already broken family could fall apart.

Review:
As a fan of Beautiful Disaster I had high hopes for this book, I was looking forward to getting to know Travis's brothers better and we already had a bit of a connection with Trent from his appearances in previous books so I was definitely expecting a lot from his story. Unfortunately I had a lot of trouble actually reading this book, in some ways it felt incredibly slow paced and whenever I had to put it down I never felt that urgent desperation to get back to it that I felt with the earlier books.

I think my main issues were with the fact that Cami already has a boyfriend, he lives in California so it's a long distance relationship and she hardly ever sees or speaks to him but that almost makes it worse. I just couldn't for the life of me figure out why she was clinging to their relationship so desperately when it seemed fairly obvious that she wasn't a priority for T.J. It also irritated me that she was spending so much time with Trent, obviously developing feelings for him, and pretty much stringing both guys along at the same time. To be fair to her she did keep telling Trent that they were just friends but from the way she was acting around him she was definitely encouraging him to think they could be something more than that. Don't even get me started on the twist at the end - that just made Cami's behaviour seem even more inappropriate and I actually wanted to see both guys walk away and leave her on her own. Just because she'd told Trent she was keeping secrets and warned him that he would hate her when he found out the truth doesn't excuse her actions!

Trent has apparently been in love with Cami for years, he had a crush on her when they were at school together but it has taken years of him being a player and working his way through the female population of the town before he decides to make a move on her. I could understand why Cami was wary of being another notch on Trent's bedpost but I couldn't understand why Trent had left it so long to show her he was interested, especially considering he knows that she is in a relationship now. It just didn't make sense to me that he's had feelings for so long and done nothing about them and I would have found their relationship much more believable if they'd only just met or he had a better excuse for not letting her know how he felt. As it was it just seemed like one minute he was all over anyone in a skirt and the next his whole world revolved around Cami. Why the sudden obsession with her?

In a lot of ways Beautiful Oblivion has less drama than Beautiful Disaster which I initially thought would be a good thing, Cami and Trent are more of a normal couple than Abby and Travis and I enjoyed seeing them spend time together and just hanging out as friends but their relationship felt lacking somehow. Most of the tension comes from Cami's refusal to break up with T.J. and from drama in her roommate Ray's relationships and it just wasn't quite enough to hold my attention or to make this a truly addictive read. This story runs alongside events in Beautiful Disaster so you do get some insight into Travis and Abby's relationship through Cami's eyes but if I'm honest even that was unsatisfactory. I feel like I already know all there is to know about the previous couple and I wanted more of a focus on Trent and Cami since this is supposed to be their story.

Beautiful Oblivion isn't a bad book though and it was a pleasant read that I'm sure fans of the series will enjoy. These Maddox boys are all hotties and I'm still curious enough about the rest of the brothers to want to carry on reading the series. I just hope that in the next book Jamie McGuire manages to recreate that addictive feeling of the first two books.