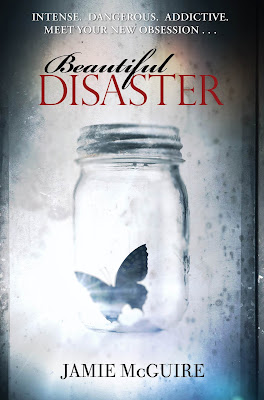 GOOD GIRL
Abby Abernathy doesn't drink or swear and she works hard. Abby believes she has buried her dark past, but when she arrives at college, her dreams of a new beginning are quickly challenged by the university's walking one-night stand.

BAD BOY
Travis Maddox, sexy, built, and covered in tattoos, is exactly what Abby needs - and wants - to avoid. He spends his nights winning money in a floating fight club, and his days as the notorious college Lothario.

IMMINENT DISASTER?
Intrigued by Abby's resistance to his charms, Travis tricks her into his life with a simple bet. If he loses, he must remain celibate for a month. If Abby loses, she must live in Travis's apartment for the same amount of time.

OR THE START OF SOMETHING BEAUTIFUL?
Either way, Travis has no idea that he has met his match. Or that this is the start of an obsessive, intense relationship that will lead them both into unimaginable territory . . .

Review:
It's hard to know where to start when it comes to reviewing Beautiful Disaster. This is the kind of book that readers have either loved or hated and I have to admit to enjoying every minute of it. If you want to read about a perfect and healthy relationship then this isn't going to be the book for you but if you like your stories with a lot of angst between two dysfunctional people then you'll be completely hooked. Whether you end up loving or hating it you are pretty much guaranteed to have a strong reaction to this novel and if you ask me that is the most important thing I look for when I'm reading a book. I want to have characters I connect with and care about - even if I don't agree with the decisions they make or their actions.

Abby has moved across the country with her best friend America wanting to start a new life where nobody knows about her past. She is determined to be the good girl, the one who works hard, finishes her homework and doesn't spend her time going out partying. The last thing she expects or wants is to attract the attention of Travis - the campus bad boy, king of one night stands and boy every girl wants to be with. But with America dating Travis's best friend Shepley they are thrown together socially. Abby has no intention of being another notch on Travis's bed post and is determined to remain immune to his charms but Travis isn't used to being turned down. The very fact that Abby tries to resist him makes him want her even more and when a bet ends up forcing them to spend more and more time together sparks are bound to fly.

I don't want to say too much about the story line because this is a very character driven novel, in fact until towards the end of the book the focus is very much on the developing friendship between Travis and Abby. Do you remember the intensity of your first relationship? When you couldn't stand to be apart for even a minute and everything was so new and exciting? Jamie McGuire has captured that feeling perfectly in Beautiful Disaster, thankfully my first relationship wasn't quite as obsessive as this one but it was just as intense!

You can probably guess from the title that things aren't all plain sailing and at times watching their interactions is almost painful. They both have issues from their pasts and they both behave in inappropriate ways that cause each other pain. I'm never going to say that I agree with some of the things Travis does - he is controlling and has issues with a violent temper (I will point out that he never raises a hand to Abby in case that is something you're worried about) - but I also felt that Abby knew exactly how to push his buttons and at times was trying to provoke a strong reaction in him. That doesn't make his reaction right but I don't think her behaviour was any better. I found myself just as irritated with the way she constantly played Travis and Parker off against each other as I was with the way Travis reacted to it.

When their relationship works it really is wonderful to watch but when things go wrong you'll find yourself unable to look away from the horror of it. In a lot of ways Beautiful Disaster works as a "how not to have a successful relationship" guide because I certainly wouldn't want to encourage anyone to emulate or accept behaviour like either Travis's or Abby's but that doesn't make it any less engaging to read about them. I think most of us are capable of separating reality and fantasy and I have to confess I had fallen for Travis in spite of his issues by the end of the book. I think this quote from one of their friends (I think it was Shep but I didn't make a note of who said it) sums up their relationship perfectly:

"You're a goddamn tornado! When you're happy, it's love and peace and butterflies. When you're pissed, you take the whole fucking world down with you!"

Beautiful Disaster is an addictive read, it is a story that you will obsess over with complex and flawed characters who you will love and hate with equal intensity. It's been a while since I had such a strong connection to characters in this age range and I can't tell you how excited I am to read the sequel when it releases next year. Walking Disaster will be the same story but told from Travis's point of view (although it will also include extra scenes) and I can't wait to get inside his head and understand exactly what he was thinking during the major events!

Source: Initially received from publisher via NetGalley but I also received a print copy from Simon & Schuster in exchange for an honest review