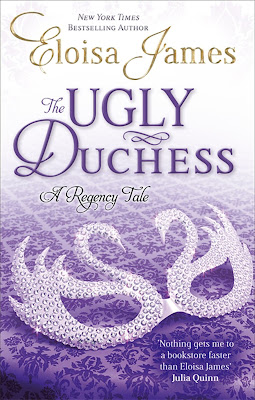 Theodora Saxby is the last woman anyone expects the gorgeous James Ryburn, heir to the Duchy of Ashbrook, to marry. But after a romantic proposal, even practical Theo finds herself convinced of her soon-to-be duke's passion. Still, the tabloids give the marriage six months. Theo would have given it a lifetime . . . until she discovers that James desires not her heart, and certainly not her countenance, but her dowry.

Society was shocked by their wedding, but scandalised by their separation. James heads out to sea where he becomes a notorious pirate, and Theo builds their estate into a flourishing concern. Back from the seas, a scandalous tattoo of a poppy under one eye, James now faces the battle of his lifetime: convincing Theo that he loved the duckling who blossomed into the swan. Theo will quickly find that for a man with the soul of a pirate, all's fair in love - or war.

Happily Ever Afters Series:
A Kiss at Midnight
Storming the Castle (Novella)
When Beauty Tamed the Beast
Winning the Wallflower (Novella)
The Duke is Mine
The Ugly Duchess
Seduced by a Pirate (Novella)
Once Upon a Tower (2013)

Review:
I'm a massive fan of Eloisa James's Happily Ever Afters series, I have enjoyed all of the previous books and novellas so couldn't wait to get started on The Ugly Duchess. Unfortunately I was really disappointed with this book, it just didn't meet up with the standards of the earlier stories and I think that is mainly because I have such an issue with people who cheat on their partners. I'm afraid that this review will contain spoilers because I don't think I can fully explain my issues with the book without going into more detail than I usually would so consider yourself warned before you continue reading.

The story starts off well, Theo and James have been friends since they were children and I loved how close they were to each other. Theo has always been considered very plain amongst the members of the Ton but she has a sizeable dowry which has attracted her fair share of suitors. When James's father practically bankrupts the family he tells James that he must marry Theo to secure her dowry - well, what's left of her dowry because his father has been illegally spending that too. James is horrified by his father's actions and doesn't want to marry Theo, not because he doesn't care for her but because he doesn't want to lie to her.

As much as you know Theo is going to be devastated when she finds out the truth I really liked the way James comes to realise how much he genuinely does love her. They make such a sweet couple and the attraction between them is intense. There is a huge fanfare surrounding the wedding though, nobody would have expected a future Duke to marry such a plain bride and it earns Theo the title of The Ugly Duchess. Not long after the wedding Theo discovers the truth behind James's marriage proposal and is rightfully furious. Her insecurities about her looks don't help because she never felt like a deserving wife for James but I think anyone would have been as mad as she was though so I wasn't at all surprised when she tells him to get the hell out of the house and not come back. What did surprise me was that James immediately complies with her wishes, he doesn't even give her time to calm down and come back to try and talk to her - he just walks away from her and sets off to sea where he becomes a pirate.

As much as I was irritated that James wasn't man enough to fight for the woman he loved I could probably have dealt with him walking away if it hadn't been for the cheating. He is gone for nearly seven (yes SEVEN!) years during which time he has not just one but multiple mistresses. We spend the majority of the novel watching him reinvent himself as a pirate while Theo is left at home facing humiliation because she was so ugly her husband couldn't even bear to live with her. I admired Theo for how tough she was, she moves abroad and reinvents herself and I think in time she could have moved on and met someone new. Unfortunately at the point where she is about to have James declared officially dead he decides it would be the perfect time to return and try to win back the affections of his wife.

I don't think I've ever read a romance before where I wanted the heroine to tell the hero to get lost and for her to find someone else to have her happy ever after with but that is what I was desperately hoping for here. James comes back and expects Theo to welcome him with open arms, he admits to having mistresses and blames her because she is the one who told him to leave in the first place - it's not like she didn't have a reason to be mad, he knew he was in the wrong! She has remained faithful to him even when she believed he was dead, she has had her life made miserable by the gossips who love to talk about her and yet she forgives him within days. It just didn't feel believable to me, perhaps if she had made him work for his forgiveness I might have come to forgive him too but as it was I was left hating him and almost hating her for letting him walk back into her life so easily.

I was so disappointed with the way The Ugly Duchess turned out, I loved the characters in the beginning and had such high hopes but by the end I was ready to throw the book across the room. I do still love Eloisa James's writing though and I do love all the other books in this series so I'm definitely looking forward to reading Once Upon a Tower when it is published next year. I would say that if you don't have a major issue with cheating spouses then you'll probably enjoy The Ugly Duchess a lot more than I did, unfortunately for me that coloured my entire reading experience with this book.