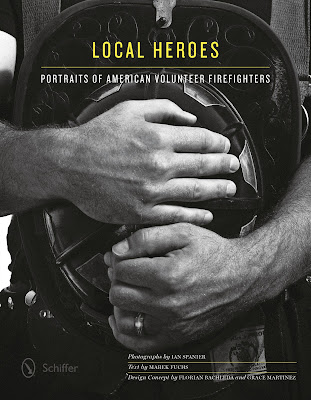 Firefighters are the unsung local heroes of every community. They protect our towns and cities, risk their lives, and give up their free time when the alarm sounds. Through beautiful photography and engaging text, take a glimpse into the lives of these men and women, all of them volunteer, including an Emmy-winning songwriter, an arborist, a lawyer, and a topographic mapmaker. Experience a sampling of life at firehouses from around the country: a 100-year-old department in a small New York town, an "Old South" department in one of America's poorest counties, a Midwest department that battled one of the worst fires in Colorado's history, and a California coastline department with only nine members--none younger than 54. Their stories will leave you inspired and thankful for the local heroes we call firemen.

Ian Spanier, a professional photographer, began taking photographs at six years old when his parents gave him his first point and shoot camera. Marek Fuchs, a journalist, is on the writing faculty at Sarah Lawrence College and is a volunteer firefighter. Florian Bachleda has been the creative director of FB Design since 2006. Grace Martinez, a Senior Associate Art Director at Glamour magazine, resides in Brooklyn, New York.

Review:
I'm going to start this review by saying that I don't usually pick up this kind of photography book but as the step-daughter of a man who spent 30 years working as a firefighter before his retirement I couldn't resist requesting this on netgalley. I grew up around firefighters and have a huge amount of respect for the difficult and dangerous work that they do. I'm used to my step-dad having to drop everything at a moment's notice to rush out of the door on a fire call and not coming home for hours, of him missing family events and special occasions, of him being late for dinner or rushing out halfway through his meals. Of course not every day is a life or death situation but I know how badly he was effected by some of the things he saw. Anyway, I've moved off topic slightly - I'm supposed to be talking about the book but I just wanted to give a bit of background so you can see why I chose to read it.

I have to say that I was surprised by the number of volunteer firefighters there are in America, we have retained firefighters in the UK who seem to do the same job as the American volunteers (they have another full time job & rush to the station whenever a call comes in) but in the UK this is a paid position. According to Local Heroes out of 1.15 million firefighters in America nearly three-quarters of them are volunteers, that figure absolutely astounded me! To me all firefighters are heroes but to continually give up your time, putting your life at risk to help others, and not even getting paid just makes volunteer firefighters even more heroic in my eyes.

This book shares the stories of various volunteer firefighters from across America and gives you an insight into what motivated them to do the job in the first place and how it has effected them. These men and women are of all different ages, from a variety of different backgrounds and have all kinds jobs outside of fire fighting. Each and every one of them is undoubtedly a hero in their own right and this book is a tribute not just to them but also to all of the other volunteer firefighters across the country. We should all be thankful to all of our emergency services for everything they do for us so I really admire this book for attempting to show that. Unfortunately, while the stories told are obviously genuine and heartfelt, I found the writing was somewhat stilted and rather repetitive which meant I didn't enjoy reading the book as much as I should have.

The actual photos are very well taken but not what I expected. I guess that is my error but I thought they would be action shots of the firefighters going about their jobs, not necessarily in the middle of a fire but around the fire station or on the fire engine, even training in the yard with the hoses and other equipment. There was so much potential for interesting shots there so I was quite disappointed to find that the pictures are so obviously posed. Half of the pictures are taken against a plain white background and although that does mean the focus is on the firefighter I found them quite boring to look at. The pictures that do have a background have some fantastic scenery in them but still felt overly posed and didn't always fit together with the position of the firefighter and the equipment they were carrying.

I have to admit that for the price this book is on sale for I was disappointed. If the book had been raising money for volunteer fire stations then I would have said it was worth every penny just for being a fantastic cause but as it isn't I think it is over priced for what it is. Please bear in mind that I haven't seen a finished copy of the book though - I received an ebook copy for review from the publisher via netgalley so can't comment on the quality of the printing or layout of the book.