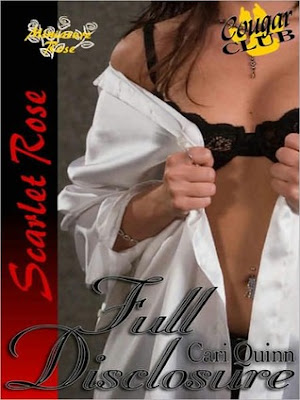 Thirty-eight-year-old divorcee Holly Burrows has had enough of battery-operated love. Prompted by an ad left at her law office, she investigates Hunk Du Jour, a website designed to foster ‘adult connections’. After weeks of sexy emails and phone calls with surf hunk Kent, she's ready to test their chemistry in person. But first she has to get through lunch with her colleague Alex, a man with a brain as agile as his body. When their consultation ends with a bang, she barely remembers the man she'd lined up for dessert. Now she thinks she's juggling two hot young guys. How can she choose between her two gorgeous cubs – and why do they remind her of each other?

Review:
Holly has been single since her divorce but has decided it's about time she got out there and started dating again. After signing up for a dating agency she has spent weeks talking to Kent over the phone and by email and it's finally time for them to meet for the first time. Before she can spend the afternoon hopefully getting horizontal with Kent Holly needs to get through a business lunch with her much younger colleague Alex. The longer she spends chatting to Alex the more the sparks fly between them but will she ditch her date with a stranger and take things further with Alex instead?

Holly a sexy and confident older woman who is looking for a bit of no strings fun with a younger guy with stamina. Just out of a messy divorce Holly isn't looking for anything serious but is in need of some genuine passion in her life. Alex has been crushing on Holly since he started working at the same law firm as her. He also secretly owns an online dating agency and when he sees that Holly has registered he can't resist temptation and contacts her pretending to be a guy called Kent. The more time he has spent chatting with her the more he knows that he wants something serious but he doesn't know how to tell her that he has been using a false identity. What will happen when Holly realises the truth?

Full Disclosure is a fun and sexy story and makes for a great read. I really enjoyed getting to know both Holly and Alex and their relationship is definitely a steamy one. Alex is one hot guy and I loved the way he was so determined to break down Holly's reservations about dating a younger man. The age difference is never an issue for him and he respects Holly for her brains as well as her beauty. If you're looking for a fast and spicy read then I'd definitely recommend picking this one up.