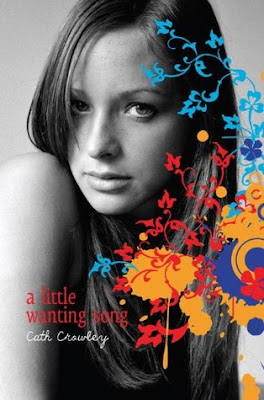 Charlie Duskin is a musician, but she only sings when she's alone, on the moonlit porch or in the back room at Old Gus's Secondhand Record Store. This summer, she's staying with her grandpa in the country, serving burgers to the local kids and missing her mom and grandmother, who have both died. Charlie finds comfort in her music, but she wants more: a friend. A dad who notices her. The chance to show Dave Robbie that she's not entirely unspectacular.

Rose Butler lives next door to Charlie's grandfather and spends her days watching cars pass on the freeway, hanging out with her troublemaker boyfriend, and ignoring Charlie summer after summer. But Rose has just won a scholarship to a science school in the city, where Charlie lives, and suddenly it seems Charlie Duskin just might be her ticket out.

Review:
When I read Graffiti Moon by Cath Crowley earlier this year I loved her descriptive writing style and the way she was able to bring the paintings in the story to life. In A Little Wanting Song she does the same again but this time with music, I love the poetic feel to her writing and the way she pulls you into the story and makes you feel emotionally connected to the characters.

A Little Wanting Song is told from two different perspectives. First you have Charlie, a lonely young girl who is trying to cope with the loss of both her mother and grandmother. Her father has become withdrawn since her mother's death and her best friend is spending all her time with someone else so Charlie has become very isolated. She always goes with her father to stay with her grandparents in the country for the summer but since the death of her grandmother nothing feels the same and she is even more lost than ever. I felt so badly for Charlie, her pain and her loneliness were heartbreaking and I was desperate for her to find a way to reconnect with her father and make some new friends. To cope with her loss Charlie loses herself in her music, she works in a record shop and has an impressive collection of Cd's but she also plays the guitar and sings although only when nobody is around to hear her.

Our other main character is Rose who lives next door to Charlie's grandfather. Rose has a pretty good life, she has a boyfriend, Luke, who she loves and they spend most of their time with their good friend Dave. The boys are happy to follow Rose and go along with anything she wants and she enjoys making fun of Charlie whenever she is visiting. Rose has big ambitions though, she doesn't want to spend her whole life stuck in a small town, she wants to make something of herself and earning a scholarship to a school in the city is the first step towards achieving her goal. She knows that her parents will never let her go to the city alone though so she decides that her best option is to befriend Charlie so that she can return to the city with her and her dad.

I have to admit that I didn't like Rose at all to start with, she is the kind of character I love to hate and I was so angry at the way she had treated Charlie in the past. The fact that she befriended Charlie just because she saw her as a ticket to the city just made me even more annoyed with her. In spite of that I found myself warming to her almost against my will as I got to know her better. She puts on a tough face to the world but deep down she can be quite nice and caring and she did genuinely come to like Charlie once she got talking to her. I really enjoyed watching their friendship develop and I loved the way Charlie's confidence grew thanks to both Rose and Dave. I don't want to say too much about Dave but I think he was one of my favourite characters and I really liked the way he supported his friends and how he eventually came to stand up for himself.

A Little Wanting Song is a beautifully written coming of age story, a story about friendships, first love and learning who you are. It's a journey of loss, grief and betrayal but also about getting past those issues and starting to live your life. I enjoyed this book even more than Graffiti Moon and I can't wait to read more from Cath Crowley in the future.