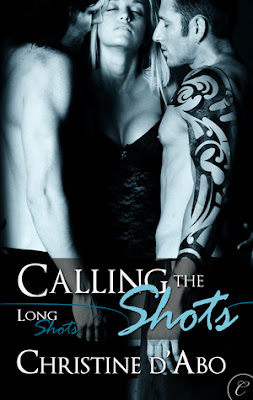 He's had a wild ride, and now sex club owner Josh Scott is looking for a change of scene. But first, he's determined to bring two friends together, and he's willing to be a third wheel to move things along...

Beth Norris is eager to be set up with hot bartender Oliver Stephenson, but she's equally attracted to matchmaker Josh. Soon she's fantasizing about both men at once—and about being the one to call the shots in the encounter...

Ready to move on with his life post-divorce, Oliver is conflicted by the realization that he's attracted to women and men. Or more specifically, to Beth and Josh. He tries to keep his distance, but it's not long before the chemistry between the trio combusts in a night of mind-blowing sex.

In the light of day, it's clear something deeper than desire is growing between Josh, Beth and Oliver. But though Josh has helped others find love in unconventional relationships, is he willing to take a chance on one himself?

Review:
I've had a bit of a crush on Josh ever since he played a starring role in Double Shot so I was incredibly excited when I found out he had his own story and couldn't wait to see him get his own happy ending. Considering I had a feeling he was half in love with Paul and Sadie it didn't come as much of a surprise to find out he was going to end up part of a permanent threesome. Calling the Shots is the longest book in the series and although it didn't quite beat Pulled Long to become my favourite it was still a fantastic read and one I'd highly recommend.

One of the things I have admired about Josh since we first met him is that he always makes sure that the people who visit Mavericks are free to indulge in their deepest and darkest desires in a safe environment. He cares deeply for his friends and put his own needs last to make sure that Paul and Sadie got their own happy ending but he has also kept a special eye on the people that Sadie cares about and has helped them all in his own way. As much as he was happy to indulge in Sadie's fantasies it was about time he got to have his own hearts desire - if he can just accept that he deserves to be happy. Josh has plans to leave Toronto to open a new club but before he goes he wants to help two of his closest friends find happiness together but can they convince him that they want him just as much as they want each other?

I really found myself liking Beth, she is so sweet and very protective of her friends that it is impossible not to like her. She had a very bad breakup with her ex that has left her confidence at an all time low and has made her wary of getting involved again but she can't help being drawn to both Josh and Oliver. I loved the way her confidence starts to come back when she is with them both and she starts to let her dominant side shine through. Oliver has also been burnt in the past and not only is he dealing with a messy divorce he also has to come to terms with the fact that he is attracted to a man for the first time. This could have made things really awkward for them but I liked the way he dealt with his sexuality and didn't find it a major issue to be attracted to both Beth and Josh. Oliver was very vulnerable because he has been so damaged by his past but I felt he coped better with things than Josh did and it was Josh who stole my heart completely. It broke my heart hearing about the things Josh had been through and I was so sad that he didn't feel like he would ever have a chance to be happy. I so badly wanted Beth and Oliver to come through for him and convince him he was worthy of being loved and I really enjoyed watching them achieve that.

All in all I found Calling the Shots to be a wonderful read, the romance was believable and cute, the characters were flawed but likeable and they really did fit together like missing pieces of a puzzle. I haven't even mentioned how hot it was, these three are seriously kinky and they weren't shy about taking what they wanted. I don't know if this is the last book in the series but I'm keeping my fingers crossed that we'll get to see more (possibly around the opening of the new club!). Either way I'll certainly be reading more by Christine d'Abo in the future.