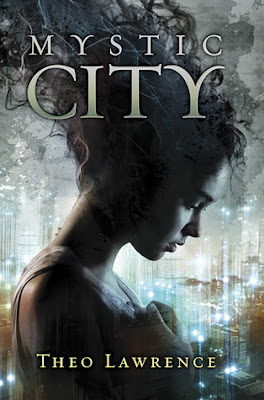 The corrupt rulers of this new city live high above the flood and survive by channelling the energy of the mystics - a magic-wielding underclass who are forced to live amongst the poor in the squalor of the Depths.

High in the Aeries, Aria Rose's fiancé has promised that their marriage will unite two of the city's ruling dynasties. But the gaps in Aria's memories tell her that this romance isn't all it seems - and the appearance of Hunter, a gorgeous rebel mystic and passionate revolutionary, is about to change the course of her life forever.

Review:
In a futuristic version of Manhattan where global warming has caused flooding the city is split in two, the Aeries - the high rise buildings that are above the flood line where only the rich can afford to live - and the Depths where the poorest members of society and the Mystics are forced to live at water level. The city is run by two powerful families - the Roses and the Fosters - and all of the elite are supporters of one of them. The two families and their supporters have been enemies for generations so it is very unexpected when the engagement of Aria Rose and Thomas Foster is announced creating a media sensation and bringing about the end of hostilities between them.

Unfortunately for Aria she doesn't remember meeting Thomas, let alone falling in love with him! After a drug overdose she has huge gaps in her memory but surely if she loved Thomas once then she can recapture those feelings and fall in love with him again? The more time she spends with him the more she begins to doubt what she is being told and then when she meets the mysterious mystic rebel Hunter things become even more confusing. Someone is lying to her but who can she trust and is there anyone who can tell her what is really going on?

I have been wanting to read Mystic City from the moment I first saw the cover and read the blurb, I have seen it described as Romeo and Juliet meets the X-Men and that is a perfect comparison to make. The story completely captivated me and I ended up devouring it in one sitting even though it has just under 400 pages! I loved the world building and found it completely believable to imagine Manhattan partly underwater due to global warming. I also loved the Mystics, it was fascinating finding out about all of the different kinds of abilities they had and I'm sure we're going to discover even more as the series continues. Mystics all have different powers, some can walk through walls, others can change their appearance to look like someone else, some are even able to heal people and do much more besides. The Mystics were the ones who rebuilt the city after the flood but they are so powerful that the elite members of society are terrified of them taking control. Forced to register with the government and allow their magic to be harnessed the Mystics have been exiled to live in the poorest part of the Depths. A group of Mystics who refused to give up their powers have formed a powerful rebellion and they are determined to fight for their rights to be treated with respect.

Aria is a great character, she is confused and at times a bit gullible but I think anyone would want to believe what their family and friends were telling them if they were in her situation. What I liked about her was that when she starts to question what is going on around her she trusts her instincts and won't go along with things just because she is told to. She is able to think for herself and put things together to uncover what is going on and you have to admire her for standing up for what she believes in. I also have to mention how much I loved Hunter, he is the kind of guy you can't help falling for - although strong, caring and protective of Aria he is also powerful, intense and at times secretive which can make it hard to tell which side he is on at times.

Mystic City is a fabulous start to this series and an impressive debut from Theo Lawrence. The story is well written, has believable world building and likeable characters and it was impossible to put down. I did manage to guess a few of the twists in advance but that didn't reduce my enjoyment of the book in the slightest and I can't wait to get my hands on the next instalment!

Source: Initially received from publisher via NetGalley but I also received a print copy from Random House in exchange for an honest review