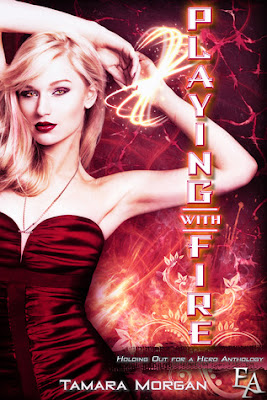 Fiona Nelson has always been one hot ticket—even before she took the conversion serum that gave her superhuman abilities. Fiona's powers come at a price: lack of human contact, or she won't be the only thing burning. When she loses control of her emotions, her fire powers run rampant...and she's hurt enough people already.

But when the man behind her conversion returns to blackmail her into helping him gain power, the only person she can turn to is Ian Jones, the man who broke her teenage heart. The man determined to expose the criminal known as Fireball, whose explosive escapades are just a little too close to Fiona's M.O.

Ian is convinced Fiona's dangerous, convinced she's Fireball, and convinced he'll damn himself if he doesn't resist a heat that's always drawn him to Fiona like a moth to a flame—but Ian has his own secrets.

And he'll learn far too soon what happens when you play with fire.

Review:
Fiona's life went downhill when she was labelled a slut at school thanks to her close friend Ian and she spent the rest of her teens trying to live up to her reputation. But since she agreed to take the conversion serum and ended up with a rather uncontrollable power to create fire human contact has been impossible. Any strong kind of emotion causes her power to flare doing damage to anyone or anything around her so although she has tried to learn to control the ability she has had to become a loner just to keep others safe. When someone with similar abilities starts making random attacks in her area Fiona is under suspicion but the person who will either condemn her or prove her innocence is none other than the boy who broke her heart and ruined her life all those years ago. Ian has always regretted the way he treated Fiona but how can he prove it to her?

I can never resist a story about humans with supernatural abilities so I couldn't wait to read Playing with Fire. This was my first story by Tamara Morgan but it won't be the last and I'm wondering if this is going to be the first instalment to a new series. If it is I'll definitely be keeping an eye out for more stories. As a novella with around 80 pages this is a quick read and doesn't allow the author much time for world building but she has still managed to give a bit of history around why people took the conversion serum and the effects it had on them. It was a really interesting idea and definitely has scope for lots more set in this world.

I liked Fiona's character but I have to admit I found myself a little frustrated at how she acted up to the reputation she has had since she was a teenager. I did feel sorry for her though, especially the way she has always been used by the men in her life and that she is now living quite a lonely and solitary existence. Ian was a bit of a geek at school and that trait has carried over into his adulthood but he has matured a lot and is much more confident than he used to be. I actually have quite a soft spot for nerds so it wasn't difficult to develop a bit of a crush on him, particularly when he was so protective of Fiona. The romance does feel a little rushed but it can be hard to achieve the right balance when writing a novella and considering the world building that takes place Playing with Fire was still an enjoyable read.

If you like stories about superheroes or characters with X-Men type abilities and are looking for a quick fun read then you can't go far wrong with this one. I'm hoping that this does indeed turn into a series and I'll be keeping my fingers crossed for longer books in future if it does that allow a bit more time for character development and a slow build of the relationship. I'll definitely keep my eye out for more by Tamara Morgan in the future though.

Thanks to Entangled Publishing I have one ebook copy of Playing with Fire to give away.
a Rafflecopter giveaway