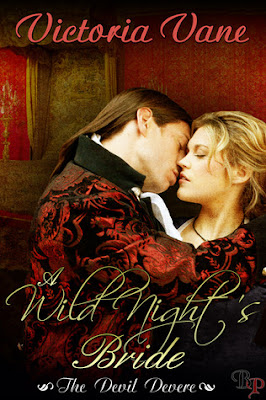 NOTE: This is book #1 in a series that reads as a continuing story.

WITH THE DEVIL IN CHARGE...THERE WILL BE HELL TO PAY...
What happens when a struggling actress and a grieving widower come together in a night of unbridled debauchery orchestrated by a bored and machinating rake?

She’s a lonely lady down on her luck...
Phoebe Scott, alias Kitty Willis, is a struggling Covent Garden actress with a bruised heart and a closely guarded secret.

He’s steadfast and eminently respectable
Sir Edward Chambers, Ned to his intimates, is guilt-ridden over his beloved wife’s death and avowed to live out a rustic and mundane life … of celibacy.

With the devil in charge — there will surely be hell to pay.
Devil in disguise, Viscount Ludovic DeVere, is determined to return his best friend, Ned, to the land of the living. His meddling machinations result in a night of mind blowing passion after which “dull dog Ned” awakes to find himself in the King of England’s bed! A WILD NIGHT’S BRIDE, a sexy, rollicking Georgian romp!

Review:
Phoebe has spent years trying to make it as an actress and she is sick of never getting the best parts - not because she is unable to act but because she doesn't have a benefactor. She has come to the realisation that if she ever wants to be the leading lady then she will have to find a rich gentleman to become her patron and sponsor her role. Ned has been in seclusion in the country since the death of his wife but is forced to return to London society to make sure his daughter can make her debut. When he comes to the city looking for a house to rent for the season he takes the time to meet up with his old friend DeVere. DeVere is determined to shake Ned out of his celibate ways and decides that a Feast of Venus party at one of the brothels he visits is the ideal place to start.

A Wild Night's Bride is a fun and sexy read that I really enjoyed. At around 100 pages it is a quick read that is easy to devour in one sitting. You have to suspend belief at times because the actions of the characters are so over the top but that helps to make this an amusing read to pass the time with. I was slightly disappointed that Ned and Phoebe go from overwhelming lust to love so quickly though - I would have preferred them to spend some time getting to know each other rather than making declarations of love after spending just one night together.

While I would like to see more of DeVere unfortunately I really didn't take to Ned's daughter Vesta or her godmother Diana. The fact that they are the heroines of the next two novellas has put me off continuing with this series but I will definitely keep an eye out for other stories from Victoria Vane in the future.

Source: Received from the author as part of a promotional giveaway on Goodreads