London 2012 Olympic Geek Out - The hunt for Wenlock & Mandeville! 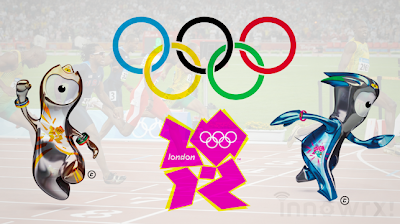 OK I know this is mainly a book blog and I don't often talk about non book related topics but I couldn't resist a quick post about the London Olympics. I know, I know the Olympics & Paralympics finished weeks ago but I've been moving house and time has flown away with me! Anyway, I was really disappointed that I didn't manage to get tickets to see any of the events, especially since it was practically on my doorstep, but I think we did ourselves proud. The opening ceremony was amazing, all of the participating athletes were fantastic and the volunteers did a superb job. I enjoyed watching as much of it as possible on the TV even though I couldn't be there in person.

Now this post isn't really about the Olympic events - it's actually about the Discovery Trails around London to go on a treasure hunt for the Olympic Mascots Wenlock and Mandeville. It all started when Kirsty (from The Overflowing Library) and I spotted a couple of Wenlock statues at random while we were in London for an event. We were back in London a couple of days later and found a few more and then someone told us that there were 6 different maps you could follow to find them all. I'm not going to even suggest that Kirsty has geeky tendencies I'll just say it blatantly, she does, but then so do I so of course we had to print of the maps and see how many of them we could find!

I know a few people have asked to see pictures of them all and I thought that some of you might like to see the routes so I've included the trail maps along with slideshows of the statues.

Kirsty and I started off with the Blue Trail which took us on a route from near London Bridge, along past the Globe Theatre, over the Millenium Bridge, past St Paul's Cathedral, along by Monument (where the Great Fire of London started in 1666) and down to the Tower of London. This took us around a part of London that I'd not been to for years, I have vague memories of a trip to the Tower as a child but enjoyed getting to explore the area again as an adult. We also rather enjoyed looking at the hot guys in suits who were walking around the city on their lunch breaks! We managed to track down all 16 Wenlocks and Mandevilles on the trail and it was impressive to see how different they all were.

Next up was the Green Trail around Regent's Park, this was a lovely scenic route and it was a beautiful sunny day so it was quite relaxing strolling around the park. It wasn't quite so easy to follow the route because we weren't always sure which path to take but there were quite a few families also taking part in the search so when in doubt we followed everyone else and we managed to find all 11 statues.

Unfortunately we were too tired to complete any other maps that day and then Kirsty had to head back home to Norfolk so she didn't get to carry on the search. We had managed to find a few random statues from other maps though so she may crop up in a few more pictures. I would like to point out that the search was in no way responsible for Kirsty's broken leg - in fact she did tell me that if she'd stayed a few days longer so we could have gone back to London and continued the hunt then she probably wouldn't have broken it in the first place!

I'm going to show just how geeky I am now by telling you that I couldn't leave the search unfinished. After all that effort to find the ones we had I was determined to get pictures of the remaining statues. In the end I convinced my Dad to spend a day up in London with me so we could complete the remaining 4 maps.

Dad & I decided to start with the Yellow Trail which took us around Liverpool Street Station, through Spitalfields Market, down Brick Lane and along past Whitechapel through to Aldgate and Leadenhall Market. I didn't know this area at all so it was nice to explore a new part of London.

The Red Trail took us across Westminster Bridge and around by the London Eye before walking along the river opposite Big Ben and the Houses of Parliament, we walked past Lambeth Palace and over Lambeth bridge before walking along behind the Houses of Parliament to Westminster Abbey. This is an area of London that I've been around quite a few times in the past but I really enjoyed walking along by the river taking pictures. We got some great photos of some of the statues with Big Ben in the background and it just made for a pleasant stroll.

The Pink Trail starts in Covent Garden although we actually did the route in the wrong order starting near Embankment Tube Station. Because I usually get the train into Charing Cross I know this area quite well, I've been to Trafalgar Square and Covent Garden loads of times and we walk right past Leicester Square on our way to Foyles whenever we're in London but in all the times I've been in that area I'd never walked through the park by Embankment before. It was really nice to find such a peaceful little corner of London that I'd not visited before and it would make a lovely spot to sit and eat lunch in the summer.

I have to admit my feet were killing me before we even started the Purple Trail (in fact I think I'd had blisters on the soles of my feet from near the beginning of the Pink Trail!) but at that point I'd managed to find 69 of the 82 statues and nothing in the world would have made me give up before finding the remaining 13! We did most of this trail at a pace that a snail would be embarrassed to slither along at & I'm honestly not sure how I made it to the end but it was worth it when we found the final Mandeville! This route took us around Piccadilly and right past the giant Waterstone's that is a regular blogger haunt when we're meeting up in London but that was the only part I was familiar with. It took us through Berkeley Square up past Mayfair and Grosvenor Square, along Bond Street and down Regents Street (past Hamleys toy shop) back to Piccadilly Circus.

It was an utterly exhausting day but we had a lot of fun discovering new areas of London and even different ways to get around the city. Unfortunately the Wenlock & Mandeville statues have been removed now (they were sold by auction to raise money for charity) but I would highly recommend doing any of these kind of treasure hunts in the future (I believe there have been hunts in the past for elephants and Faberge eggs but I missed those ones). This was a fun way to feel like we were taking part in the Olympics without having tickets and we saw loads of different families taking part in the searches.

So I think I've proved my membership to the geeky club but I'm proud to say I tracked down and took photos of 82 Wenlock and Mandevilles over the space of two days. If you happened to be in London during the Olympics I'd love to know if you spotted any of them. Did you follow the trails or just find them at random? Or have you done any of the previous hunts? I'd love to hear more about them!
at 12:00

Email ThisBlogThis!Share to TwitterShare to FacebookShare to Pinterest
Labels: About Me