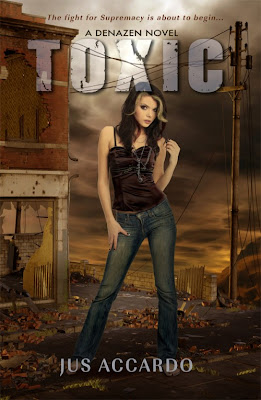 When a Six saved Kale's life the night of Sumrun, she warned there would be consequences. A trade-off. Something taken for the life they gained. But Dez never imagined she'd lose the one thing she'd give anything to keep... And as if it's not enough Dez finds her immunity to Kale fading, the Six brought in to help Kale learn to control his killer touch starts drooling on him the moment they meet. Worse than that? Jade can touch Kale. But bimbo Barbie is the least of Dez's problems.

After Dez and Kale got away at Sumrun, her father lost not only his most powerful weapon but an important piece of the Supremacy project. Forced by Denazen to remedy the situation, he poisons Dez and offers her a choice--surrender to Denazen for the cure...or die. Determined to find a solution that doesn't involve being bagged and tagged--or losing someone she loves--Dez keeps the poison a secret. But when a rash of Denazen attacks hit a little too close to home, Dez is convinced there's a traitor among them. Jade.

Sacrifices, broken promises, and secrets. Dez will have to lay it all on the line if there's any hope of proving Jade's guilt before they all end up Residents of Denazen. Or worse, dead...

Review:
I'm finding it really difficult to write a review of Toxic, this series is incredibly popular and I seem to be in the minority in the fact that while I like it I haven't been absolutely blown away by it. I think I've had to come to the conclusion that this series just isn't one I'm going to get on with, it seems like the more I read the more irritating I find the characters and the less I enjoy the story. Although Touch didn't amaze me I did like some things about it, I wasn't a huge Kale fan because I found him too sweet and innocent for my tastes (I have a thing for the bad boys!) but after reading Untouched which is written from his point of view he really started to grow on me. I liked Dez but found that she could be incredibly naive and trusting and considering all the things she went through I thought she would have been smarter than that.

Unfortunately in Toxic I really felt like someone had given Dez a stupid pill, she spent the majority of the book either burying her head in the sand and pretending that certain things weren't really happening or acting in a completely crazy way without thinking through the consequences. I'm sure she has developed a death wish when it comes to Kale, considering that she is no longer immune to his ability to kill with a single touch she sure spends a lot of time trying to touch him. Seriously, I get that they're horny teenagers but if the choice is serious pain and possible death every time you touch your boyfriend I'd settle for just being able to spend time together and keeping my hands to myself. The way they started avoiding spending time together made me feel that their relationship doesn't have any real emotional connection - it's all about the lust and when that is taken out of the equation it's not worth the effort. It also annoyed me that Dez kept so many secrets from someone that she supposedly loved and I was really angry that neither of them seemed capable of spending more than 10 seconds together without putting her life at risk by trying to kiss.

I already mentioned that I found Kale a bit innocent for my tastes but I had started to like him more after seeing things from his point of view. I have to admit that my feelings towards him while reading Toxic went from apathy to irritation to downright livid though. I can tell you right now that after his actions towards the end of the book if he had been my boyfriend he'd have ended up with a slap in the face and a boot up his backside as I kicked him to the kerb! I know that they tried to explain his actions away by saying it was just his unique way of looking at the world but there is no way he wouldn't have known what he did was wrong. He's unsure of how to act in social situations but he isn't stupid! Well I was lead to believe he wasn't stupid anyway but now I'm not so sure.

I hated the introduction of a completely pointless love triangle with one of the most vile characters I've ever come across. Every time Jade stepped on the page I wanted to poke my own eyes out just so I didn't have to carry on reading about her. I had figured out who the villain was long before the big reveal was made so the surprise lost it's punch completely even though there was a twist that I hadn't seen coming. I do like the authors writing style and I love the idea of the Sixes and their different psychic abilities but I don't think that has been explored to it's full potential. Unfortunately I don't think I can bring myself to read the next book if it means more of the "relationship" between Dez and Kale. I don't like either of them and I honestly couldn't care less if they end up living happily ever after or if they end up killing each other. I feel like this series had such potential and I'm really disappointed with the way things have turned out but like I already said I am in the minority when it comes to these books - loads of people seem to adore them so don't let me put you off Toxic if you're a massive fan of the earlier books.

Source: Received from Entangled Publishing in exchange for an honest review.