Review: Until There Was You - Jessica Scott 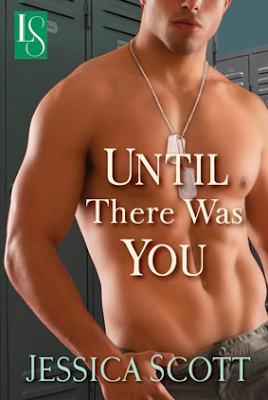 Though he plays by the rules, she’s not afraid to break them. Now these two strong-willed military leaders will prove that opposites attract . . . even under fire.

A by-the-book captain with a West Point background, Evan Loehr refuses to mix business with pleasure—except for an unguarded instance years ago when he succumbed to the deep sensuality of redheaded beauty Claire Montoya. Since that brief lapse in judgement, Evan has been at odds with her. But when he is asked to train a combat team alongside Claire, battle-hardened Evan is in for the fight of his life.

Strong, gutsy, and loyal, Captain Claire Montoya has worked hard to achieve her high military rank. In Evan Loehr, Claire sees a spoiled commander who puts the rules before everything else—including his people. Army orders force them together and Claire soon discovers that there is more to Evan than meets the eye. He too has dark secrets and deep longings. For all their differences, Evan and Claire share two crucial passions: their country and each other.

Review:
I absolutely loved Jessica Scott's first novel Because of You so I couldn't wait to read the second book in this series, Until There Was You. I was a little surprised to find that this story wasn't about one of the couples we got to know so well in the previous book, I had been particularly hoping to find out what is going on with Laura and Trent after the way things ended between them so it was quite a relief to know that the next book, Back to You, will be their story. I don't remember either Claire or Evan from the previous book so if they have already made an appearance then I'm pretty sure it wasn't a major one. I enjoyed their story but I have to admit that I missed the close knit friendships from the first book, we do have a supporting cast this time around but I didn't feel as connected to them as I was to all of the other characters.

Claire and Evan are both officers and they have been tasked with training a group of soldiers who are about to go on tour. They both have very different approaches to their work and often disagree with each other in regards to the best way to proceed. It doesn't help that they are on a tight time frame to get the training done and their boss has them focusing on teaching the soldiers presentation skills rather than how to survive in a combat situation. Both Claire and Evan can agree that the training plan is flawed but they can't agree on what they should do about it. Evan has been an officer since he joined the army, he sticks rigidly to the rules and wouldn't dream of going against the plan that has been set in place. Claire on the other hand was an enlisted soldier before she became an officer and thinks the rules are there to be bent if not broken completely. She is much more worried about making sure her team has the training that could save their lives than she is about keeping the commander happy.

Claire and Evan are both strong characters, they both have things in their pasts that have made them wary of relationships and despite the fact that they are attracted to each other neither of them is willing to act upon it. Although they are opposites in a lot of ways they actually have a lot in common, they care about their fellow soldiers and they both want to do whatever they can to ensure their teams are fully trained. They both love their army careers and neither of them can imagine life as a civilian. They also both have a hard time adjusting to being at home rather than on another tour of duty.

As much as I admired them both for some reason I had a hard time connecting to them emotionally. Their relationship just didn't resonate with me in the same way that Jen and Shane's did in the first book. I'm not sure if it was because the focus was more on the issues that they faced at the training centre than on them getting to know each other but it did mean that I didn't enjoy this book quite as much as the first one. I have to admit there were times when I found it difficult to keep track of all the military terminology and the different ranks because that is something I'm not overly familiar with. Until There Was You is still a solid story though and the fact that Jessica Scott is herself an army officer shines through in her writing as she gives you an insider look at not just how much training is required before soldiers are sent to combat but also how quickly they must prepare themselves. This is a series I'm happy to recommend and I can't wait to get my hands on Back to You when it is released next year!