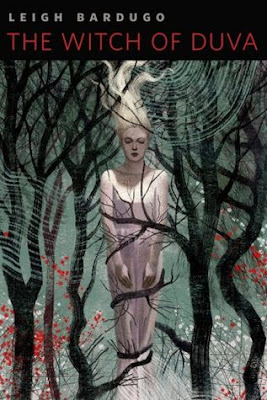 There was a time when the woods near Duva ate girls… or so the story goes. But it’s just possible that the danger may be a little bit closer to home. This story is a companion folk tale to Leigh Bardugo’s debut novel, Shadow and Bone.

This free short story can be read online at the Tor website here.

Review:
The Witch of Duva is a free short story set in the same world as Leigh Bardugo's novel The Gathering Dark (called Shadow and Bone if you're in the US) but can be read entirely separately to the book because there is no cross over of characters. In fact this story is actually a fairytale that is told by people who live in Ravka to their children.

Our heroine is a young girl called Nadya who loses everything after the death of her mother. Her brother is enlisted into the army and her father quickly gets remarried to Karina, a woman who very obviously hates her. To make matters worse the village is currently suffering from famine and young girls are disappearing making the villagers believe there is a monster in the forest. When Karina forces Nadya to go into the woods on her own after dark she finds something very unexpected.

Leigh Bardugo has created a perfect, dark fairytale that the Grimm brothers would have been proud of. The story has all the major elements you'd expect from a fairytale - the evil stepmother, a wicked witch, a child lost and alone in the dark and scary woods - but I guarantee that you won't be expecting the outcome! There is such a fantastic twist at the end I had to read part of the story twice to believe it. I wouldn't have been disappointed if I'd paid for this short story so the fact that it has been posted online for free is an extra bonus. I'd highly recommend this to anyone who loves fairytales with dark and twisted endings.