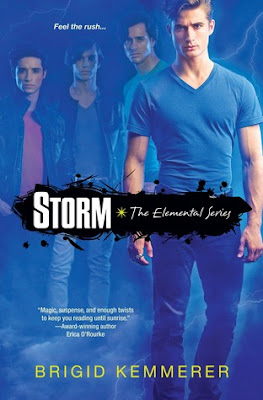 Becca Chandler is suddenly getting all the guys all the ones she doesn't want. Ever since her ex-boyfriend spread those lies about her. Then she saves Chris Merrick from a beating in the school parking lot. Chris is different. Way different: he can control water just like his brothers can control fire, wind, and earth. They're powerful. Dangerous. Marked for death.

And now that she knows the truth, so is Becca.

Secrets are hard to keep when your life's at stake. When Hunter, the mysterious new kid around school, turns up with a talent for being in the wrong place at the right time, Becca thinks she can trust him. But then Hunter goes head-to-head with Chris, and Becca wonders who's hiding the most dangerous truth of all.

The storm is coming.

Review:
So many of my friends have been raving about Brigid Kemmerer's Elementals series and I really enjoyed the prequel short story Elemental so I had high hopes when I picked up Storm. Thankfully the story lived up to my expectations and this is a great debut novel. I loved the fact that it was a YA paranormal book that has moved away from vampires and shapeshifters and come up with something different. Here we have people with the ability to control the elements which is definitely a power I've not seen much of but can't wait to learn more about.

The Merrick brothers are all very powerful elementals each with control over a different element. Because they are so strong they are considered dangerous by the other families in the area who have less power than they do. The others worry that the Merrick's will expose them all and they will stop at nothing to keep their secret. The boy's parents made a deal with the other families though, a deal that should have kept them protected. As long as the Merrick's don't expose their powers or harm others then the other families must leave them alone but the younger generation don't agree with the deal that their parents made and they have spent years attacking the brothers trying to get them to break the pact first.

Michael is the oldest and most powerful brother, he is an earth elemental and has had to take over the role of breadwinner and surrogate parent to his siblings since their parents were killed. I loved Michael in the prequel short story and at first couldn't understand why he was so different in this book, he comes across as very moody and uncaring but when I found out why I was completely heartbroken for him. His attitude was completely understandable and he is under so much pressure trying to keep his brothers safe, he really has the weight of the world on his shoulders and I hope we get to see things become easier for him as the series continues.

Next we have the twins Nick, an air elemental, and Gabriel who has power over fire. Nick is the peacemaker in the family, he is always trying to smooth things over between Michael and Gabriel and he is also the most easy going of the brothers. Gabriel is the troublemaker, he resents the fact that Michael is always telling them what to do and he hates the fact that he refuses to stand up for them against the other elemental families. Gabriel is an expert at flirting and has a way with the ladies but he also has a quick temper and you wouldn't want to get on his bad side. Last but by no means least you have the youngest brother Chris. Chris is a water elemental and he is only just beginning to learn the extent of his abilities, he still finds it difficult to control his powers and is the one most at risk of exposing them. Chris is a really sweet guy and I loved the way we got to see part of the story from his point of view.

Becca has been in the same class as Chris for years but they never really spoke until the day she sees him being attacked by two other students in the parking lot. Becca may be half the size of the boys attacking Chris but she can't leave him there helpless and alone and rushes to his aid. You have to admire Becca, she has been through hell at school thanks to the bullies who are making her life miserable but she refuses to let them see her cry. She holds her head up high and does her best to rise above them, it isn't easy for her but she is tough and has survived things that would have broken most people. Thanks to Becca's bravery in coming to Chris's aid she soon finds herself in a whole heap of trouble though and the bullies are now the least of her problems. Chris's whole family is under attack by an extremely powerful elemental and if she isn't careful Becca could find herself hurt in the crossfire.

I don't want to say more about the plot so you'll just have to read the book yourself to find out. With four hot brothers, a selection of kick ass characters with unusual powers, fast paced edge of your seat action and a different romance with every story this is a series to watch out for and one I can't recommend highly enough. Now I'm off to pick up my copy of Fearless!