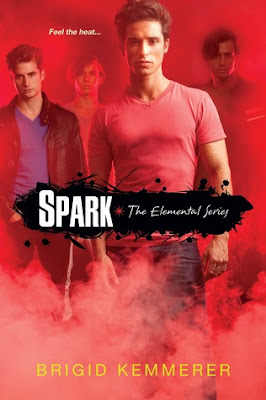 Gabriel has always had his brothers to rely on, especially his twin, Nick. But when an arsonist starts wreaking havoc on their town, all the signs point to Gabriel. Only he’s not doing it.

More than Gabriel’s pride is at stake -- this could cost him his family, maybe his life. And no one seems to hear him. Except a shy sophomore named Layne, a brainiac who dresses in turtlenecks and jeans and keeps him totally off balance. Layne understands family problems, and she understands secrets. She has a few of her own.

Gabriel can’t let her guess about his brothers, about his abilities, about the danger that’s right at his heels. But there are some risks he can’t help taking.

The fuse is lit…

Review:
After really enjoying Storm and the short stories Elemental and Fearless I couldn't wait to start reading Spark. The Elementals series has really captured me and I'm happy to say that Spark was even better than Storm. This is a series I can't recommend highly enough but I do recommend reading the books in order though so if you haven't started it yet please bear in mind that this review will contain spoilers for the previous books.

I already liked Gabriel for his snarky humour but the more we get to know him the more we see how his bad boy attitude is a front to hide the guilt he feels over his parents deaths. Gabriel is a deeply troubled individual, he blames himself for the accident that tore his family apart, he feels inadequate when he compares himself to his perfect twin Nicolas and he is distanced from his older brother Michael who he resents for being the one to tell him what to do all the time. My heart broke for him as I watched how hard he tries to control his powers and how much he wants to do the right thing but how everyone is always quick to believe the worst of him. There are times when Gabriel is so lost and lonely that I wanted to climb into the book and comfort him! Gabriel is the kind of guy who uses his attitude to drive people away so when he is afraid that someone is getting too close his defences kick into high gear and the insults start flowing. It makes him hard to get close to but he is well worth the effort!

It's going to take a special kind of girl to break through Gabriel's tough outer shell and find the sweet and caring guy underneath but luckily Layne is up to the task. Layne has her own issues that she is dealing with and she is very wary of letting anyone get close to her but there is just something about Gabriel she finds hard to resist. Layne has had it tough with her family, her mother has to be one of the most useless and stuck up women I've ever come across and her dad has kind of fallen apart since she left them. Layne is the one who has been holding everything together for herself and her brother Simon but she is struggling to keep it all going. On a side note I just have to mention how much I adored Simon and I really admired his determination to prove everyone wrong about him, the bond that grows between him and Gabriel is so sweet and I loved seeing them spend time together. To get back to Layne and Gabriel I want to tell you how much I enjoyed seeing their relationship develop, this is no case of instant love, in fact they don't even really like each other in the beginning but as they get to know each other a real bond grows between them. There wasn't a single point where their relationship felt rushed or forced and I liked that their romance was given more page time than that of Chris and Becca's in Storm (not that I didn't enjoy Chris and Becca's story because I did but the romance was more of a sideline in the first book and in Spark it is front and centre).

One of the best things about this series has always been the relationship between the Merrick brothers and that is no exception in this story. As twins Gabriel and Nicholas have always been the closest of the four of them, they have been practically inseparable since they were small children and they tell each other everything. That starts to change in this book as Gabriel gets jealous when Nick starts doing things without him and a rift forms between them. It was hard to see them so distanced from each other but I was glad to see that they come out stronger on the other side of their argument. I think that their fall out did them good in the long run because it allowed them to find out things that they had both kept secret from each other in the past. My favourite thing was watching the way Gabriel and Michael started to understand each other better. Gabriel resents Michael for being the one in charge and hates that Michael spoils his fun by telling him what to do but he has finally started to grow up enough to see just how hard things must have been for Michael. It isn't easy for anyone to suddenly go from being a teenager who is looking at going to college to becoming the guardian of 3 younger boys who are traumatised by the deaths of their parents. Michael never really had time to grieve himself because he had to throw himself into the task of taking care of his brothers and it's about time they started to realise what he gave up in order to keep the family together.

Alongside the romance and the family drama we also get to learn a lot more about Gabriel's powers and watch some quite heroic behaviour on his part as he practices with Hunter. There is plenty of action since an arsonist is wreaking havoc and managing to successfully place the blame in Gabriel's direction but can they figure out who is behind it all before someone is seriously hurt? I think I've given you more than enough reasons to pick up a copy of Spark immediately, if you're a fan of the previous books then you're going to love this latest instalment and if you're new to the series then you really don't know what you're missing!