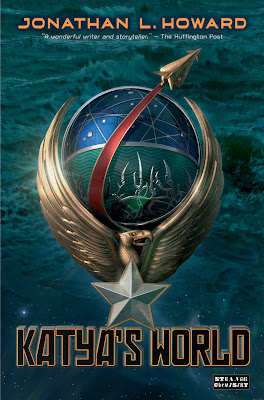 The distant and unloved colony world of Russalka has no land, only the raging sea. No clear skies, only the endless storm clouds. Beneath the waves, the people live in pressurised environments and take what they need from the boundless ocean. It is a hard life, but it is theirs and they fought a war against Earth to protect it. But wars leave wounds that never quite heal, and secrets that never quite lie silent.

Katya Kuriakova doesn’t care much about ancient history like that, though. She is making her first submarine voyage as crew; the first nice, simple journey of what she expects to be a nice, simple career.

There is nothing nice and simple about the deep black waters of Russalka, however; soon she will encounter pirates and war criminals, see death and tragedy at first hand, and realise that her world’s future lies on the narrowest of knife edges. For in the crushing depths lies a sleeping monster, an abomination of unknown origin, and when it wakes, it will seek out and kill every single person on the planet.

The Russalka Chronicles:
Katya's World
Titles and release dates for further books in the series to be confirmed.

Review:
Katya may only be fifteen but children grow up fast on Russalka and she has just received her adult ID card that allows her to start work as the navigator on her uncle's submarine Puskin's Baby. Her first journey should be an easy one, just a routine delivery to one of the colonies, but that was before the vessel is commandeered by a soldier to transport notorious pirate Kane to prison. Thanks to the soldier's lack of navigational skills Katya is forced to take them on a dangerous route through perilous waters and that is where things really start to go wrong. Far away from usual shipping routes the submarine encounters a previously unknown and extremely dangerous enemy, one that puts the entire planet at risk.

I haven't read much hard core scifi so I have to admit I wasn't too sure what to expect when I picked up Katya's World. The story sounded really interesting though so I thought I'd give it a try and I'm glad I did because I really enjoyed it. Russalka isn't a world that I'd like to visit though, entirely covered with water there is no land mass available so the colonists spend their lives either underwater or on floating towns. Most of the underwater structures are built in underground cave systems that have the water carefully pumped out of them and just the idea of visiting them makes me feel claustrophobic so don't even get me started on the submarines! It's a harsh life but the colonists have been there for generations and have adapted well to their new environment. I found the information we were given about the technology they used was interesting but there were times I felt it slowed the story down a little. I also wanted more of a visual description of their underwater environment, I can clearly picture the submarines they used and even the homes they built but was at more of a loss when it came to their surroundings.

The story is a fast paced adventure though and one that managed to continuously surprise me with the twists and turns it took. Just when I'd think I had things figured out something would happen to turn things on their head and I'd have to start guessing again. We have been introduced to a wide range of characters and I loved how we were kept on our toes trying to figure out everyone's motives and where their loyalties lie. Nothing is quite what it seemed and everyone seems to be keeping some kind of secret. I also really liked the Russian influence to the story and the way the Russalkans were proud of their Russian heritage but at the same time had turned their back on so much of their Earth history. It was interesting to see how this effected the decisions they made and the way they thought things through, especially considering the recent interactions they'd had with Earth.

Katya is a great character, although she acts much older than her age you have to expect that considering the environment she has grown up in. She is smart, resourceful and independent and the kind of character who puts herself at risk to protect those she cares about. She is in a very male dominated world but she is strong enough to stand up for herself and make herself heard which is a good thing considering she comes up with some pretty good plans. Alongside Katya my favourite character would have to be Kane, he is a notorious pirate but he acts completely differently to how I expected him to. A lot of the things he has done cross the lines into evil but at the same time he is very easy to trust. I'm not even sure why I wanted to trust him since half the time I was worried about his motives but there is just something so likeable about him that I couldn't help myself. Katya's World is a great start to the Russalka Chronicles and I'll definitely be reading the next instalment to find out where Jonathan L. Howard takes things next.

Source: Received from the publisher via NetGalley in exchange for an honest review