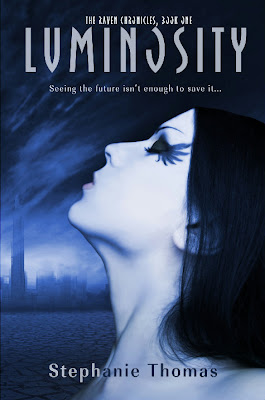 My name is Beatrice. When I was born, I was blessed with the Sight. I was immediately removed from my parents and enrolled in the Institution. At the age of twelve, I had my first true vision, earning my raven’s wings. And when I turned seventeen, one of my visions came true. Things haven’t been the same since.

The Institution depends on me to keep the City safe from our enemy, the Dreamcatchers, but I’m finding it harder to do while keeping a secret from everyone, including my best friend Gabe. It is a secret that could put us all in danger. A secret that could kill me and everyone close to me.

Review:
Beatrice is a Seer and her visions are amongst the clearest of all of the Seers at the Institution where she was raised. With a war on the horizon it is Beatrice's visions that the Institution depend upon most to protect themselves and the rest of the city from the Dreamcatchers. All of the Seers visions are recorded and interpreted by the Keeper, the most important woman at the Institute, she is the one who has absolute control over what actions are taken and how they go about protecting the city. Nobody is supposed to lie to the Keeper but Beatrice has a frightening secret, one of their enemies has been visiting her dreams and he is making her question everything she has ever been told about the Dreamcatchers and the war. Unsure of where to turn and who she can trust Beatrice finds herself pushing her friends away in order to keep them safe but can she find the answers she needs without their help?

I have a fascination with the idea of humans with any kind of psychic powers so I knew I wanted to read Luminosity from the moment I read the blurb. I was intrigued by the idea of an Institute full of people who have visions of the future and couldn't wait to see more about how they used these visions to protect themselves and the vulnerable citizens around them. The story is told by Beatrice so we get to see a lot of how the Seers live which I found really interesting. The way the children are taken from their families practically at birth and raised within the institution was actually quite horrifying, they didn't have an easy life and were shown no love which I found really sad. The Seers are raised more as a commodity than as people with feelings and it was quite brutal how expendable the Keeper seemed to think they were. Stephanie Thomas certainly didn't shy away from showing the harsher side of their lives and you could never be quite sure what would happen to Beatrice and her friends next.

Beatrice has a close bond with several other Seers but it was her best friend Gabe that she has always been able to share everything with in the past. I have to say I really liked Gabe, he was so supportive and sweet towards Beatrice but was understandably frustrated by the way she started pushing him away and keeping secrets. It was obvious that Gabe really cared for her and it seemed that she had the same feelings for him which is why I was so confused when the love triangle started to develop. Echo is a Dreamcatcher and when he starts appearing in Beatrice's dreams she is worried that he is trying to trick her. She has been raised to believe that the Dreamcatchers are evil and that they will drain the lives of the innocent humans if they are able to break into the city so I couldn't understand it when she started to develop feelings towards Echo. It might have made some sense if Echo had been less secretive but he never once opened up to her and gave her any information. He talks in riddles and I don't feel like I know anything about him apart from the fact that he is a good looking Dreamcatcher. The fact I had no connection with him just made the triangle completely unbelievable and irritating.

The thing I really found missing from the story was more information about the Dreamcatchers and the way their abilities work. We're supposed to believe that the Institute hasn't told the Seers the complete truth about them - and I do suspect that is the case - but we have watched the Dreamcatchers brutally murder citizens with their ability so that doesn't make me feel very sympathetic towards them. I may not trust the Institute completely but I trust the Dreamcatchers and Echo even less at this point in time. I'm sure that we will learn more about them as the series continues but I felt that the lack of information did reduce my enjoyment of Luminosity slightly. If I'd been given more answers by the end of the book I probably would have increased my rating from 3 stars to at least 4.

Luminosity is still an enjoyable story though, it just failed to wow me as much as I hoped it would. Considering this is Stephanie Thomas's debut it was a solid start to the series, she has created an interesting world that with a bit more detail is sure to become really fascinating. I would recommend the series to fans of dystopian stories, particularly if you want something a bit different and are interested in the idea of Seers and Dreamcatchers. I'll definitely be picking up the next instalment when it is released and who knows by the end of that book I may even have switched from team Gabe to team Echo (although I think that is unlikely!).