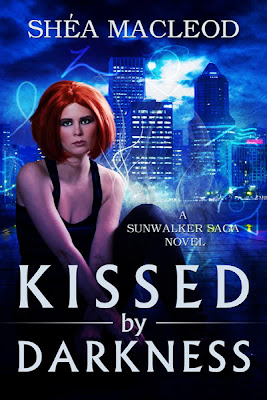 Danger is always on the menu for Morgan Bailey, a sexy and street-smart bounty hunter, who prowls the dark underworld of Portland, Oregon hunting creatures of the night. Morgan’s never met a vampire she couldn’t dust or a demon she couldn’t kill until she’s hired to destroy a new kind of mystical threat: the Sunwalker.

A powerful immortal once believed myth, the Sunwalker carries with him an ancient secret which, if left unchecked, will destroy Morgan’s world. Pursued by a passionate Templar Knight and the target of the local vampire clans, an ancient power is awakened within her, unlike anything she’s ever known. Morgan must uncover the truth behind her mission and about herself, before the Darkness lurking inside swallows her whole.

Review:
Since surviving a vampire attack several years ago Morgan has developed some new abilities that make her a perfect vampire hunter. Now working for her friends PI firm she spends her time killing vampires and demons to keep the human population safe and unaware of the danger surrounding them. Her latest case is to track down and kill a Sunwalker but everyone knows that they are just a myth though so it's going to be a pretty impossible job. Well Morgan always thought that Sunwalkers were a myth but she's about to discover how little she really knows about the supernatural and the more she uncovers the greater the danger she must face.

I love urban fantasy so I'm always excited when I come across a new series to try, particularly one where the first few books are already available because it means I won't have to wait a whole year to find out what happens next. So when I saw Kissed by Darkness on the Amazon Vine list I jumped at the chance to review it. Unfortunately if I had to describe the book in just one word the only one I can think of is disappointing. I had such high hopes but although there are signs that this could develop into an interesting series it didn't manage to impress me.

I'll start with the things that I did like and the main one was the history the author has created for the vampires. With links to the Knights Templar and the lost city of Atlantis the author has come up with something a bit different which I always appreciate. I still have questions about the world but that is something to be expected when you're reading the first book in a series. I also quite liked Jack, he doesn't particularly stand out as different to many other heroes I've read about but there is definitely potential for a crush worthy male lead there. There were a few amusing moments throughout the book and I particularly liked Morgan's friend Cordelia and her pet cat.

I think the main reason I didn't enjoy the book was because I really don't think much of Morgan. She spends half of the book talking about how kickass she is and how she has become so much stronger and faster since her vampire attack and the rest of it talking about how hot every single guy she meets is. Seriously, there was not a man in the book who didn't make her hormones go crazy (apart from the bad guy so it's pretty obvious from page one that he must be evil!). I'm all for having hot guys in the story but I don't need to hear how gorgeous they are on EVERY. SINGLE. PAGE. I get it Morgan, you have a crush on Inigo but can't go there because he's your best friends cousin - I heard you the first 10 times and saying it another 20 isn't going to make me care. While we're on the subject of Inigo all I have to say about him is ugh, he is such a creepy stalker type that I didn't find him even slightly attractive! To go back to the point about how kickass Morgan is I have to mention that if a character is constantly telling me how good she is in a fight but then never once manages to back up her claims then I find it more than a little difficult to believe her. Honestly, I didn't think she was kickass in the slightest for the majority of the book and the tiny hint at it that I did see was a case of too little too late. I don't like to call characters too stupid to live but in this case the phrase really fits, she constantly made rookie mistakes and nearly got herself killed practically every time she came across a vampire - not ideal for someone who supposedly makes a living hunting them!

Like I said Kissed by Darkness isn't all bad but I think my dislike of Morgan really coloured my enjoyment of the rest of the story. After revelations towards the end of the book I do think the series has some potential but at the moment I'm undecided about whether I'll carry on reading it. Just reading the blurb of Kissed by Fire and seeing that the story is about dragons makes me want to pick it up (I have a bit of a thing for dragons) but unless Morgan has undergone a major personality transplant I'm not sure if I can bring myself to spend more time in her company.