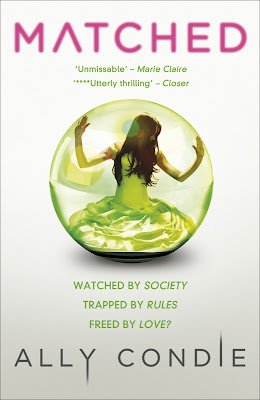 On her seventeenth birthday, Cassia meets her match.
Society dictates he is her perfect partner for life.
Except he's not.

In Cassia's society, Officials decide who people love.
How many children they have.
Where they work.
When they die.

But as Cassia finds herself falling in love with another boy, she is determined to make some choices of her own.

And that's when her whole world begins to unravel . . .

Review:
Cassia has been waiting her whole life for her matching ceremony, the day that she gets to see the face of her future husband for the very first time. You see, in her society everything about her life is controlled by officials - what job she will do, where she will live, who she will marry and even how many children they will be allowed to have. As much as she is excited about this right of passage into adulthood she is nervous about what is going to happen. What will he look like? Will she like him? Will he like her? What will happen if she has to move far away from her family to live with him? Then at the matching ceremony something incredibly unusual happens, Cassia's perfect match is someone she already knows. Not just anyone though, he is actually her best friend Xander! She should be over the moon, in fact she was until one very minor thing. When she looks at the memory card she is given that should contain details of her perfect match it doesn't show Xander, instead it shows another boy she knows Kye. Seeing Kye's face on the screen gets Cassia thinking, what if both boys would be perfect for her? Shouldn't she have the right to pick which one she wants to be with?

Matched is a book that I have heard so many things about since it was released a couple of years ago so I have no idea why I only just got around to reading it. The only reason I'm not kicking myself for waiting this long is that the third and final instalment to the series is just about to be published so I'm not going to have a long wait before I can finish reading the series. I have to say I would not want to live in the world that Ally Condie has created though, I can't bear the thought of some government official having the right to tell me how to live my entire life! And to think that there are only 100 books, 100 poems, 100 paintings etc that are considered acceptable for people to look at is just horrifying. One of the things that makes our world so amazing is the variety of things that are available to us and I hate the idea of limiting our options to such an extent.

I do still have questions about how Cassia's world came to be the way it is now and I also want to know more about the war that they are currently fighting but I'm confident we'll get these answers as the series continues. I was a little confused by the way that people from her society have forgotten how to write though. I know we use computers / gadgets more and more but I can't see that we will ever completely lose the skills to physically write - we still have to be capable of reading if we want to type!

It took me a while to warm up to the romance between Cassia and Kye. At first I couldn't understand why she was so drawn to him when she has always been so close with Xander and I was almost disappointed in her because of it. But then I got to thinking about how Kye had the draw of being forbidden to her and it was easy to see why that made him attractive and then as we got to know him better I found it easier to see how much they had in common too. I did end up feeling sorry for Xander though, he hasn't done anything to deserve losing his match and he seems to have genuine feelings for Cassia. I guess I'm going to have to read Crossed and Reached to find out how things play out between the three of them though. I'm very much looking forward to seeing what happens next, especially after the discoveries made by Cassia at the end of the book!