Review: One Night with a Hero - Laura Kaye 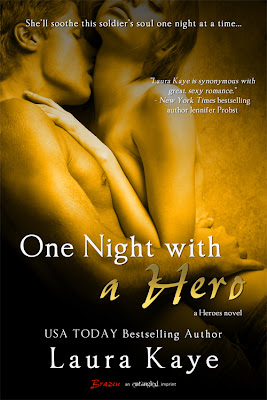 He wants just one night…

After growing up with an abusive, alcoholic father, Army Special Forces Sgt. Brady Scott vowed never to marry or have kids. Sent stateside to get his head on straight—and his anger in check—Brady’s looking for a distraction. He finds it in his beautiful new neighbor’s one-night-only offer for hot sex, but her ability to make him forget is addictive. Suddenly, Brady’s not so sure he can stay away.

…what they need is each other.

Orphaned as a child, community centre director Joss Daniels swore she’d never put herself in a position to be left behind again, but she can’t deny herself one sizzling night with the sexy soldier who makes her laugh and kisses her senseless. When Joss discovers she’s pregnant, Brady’s rejection leaves her feeling abandoned. Now, they must overcome their fears before they lose the love and security they’ve found in each other, but can they let go of the past to create a future together?

The Hero Series:
Her Forbidden Hero
One Night with a Hero
Titles and release dates for future books to be confirmed

Review:
We first met Brady in Her Forbidden Hero - Alyssa is his sister and Marco is his best friend - and I actually commented in my review that I was really hoping that Laura Kaye would give Brady his own story. I can't tell you how glad I am that she did, I had a feeling that Brady would be a keeper and as much as I loved Marco in the first book Brady took me to a whole other level of lust in One Night with a Hero! It was incredibly easy to see what attracted Joss to him but it was equally easy to see that she was a worthy heroine. Although I do think that this story can easily be read as a stand alone story I would happily recommend both of these books to any fan of contemporary romance who enjoys reading about sexy military men.

Brady and Alyssa grew up with a drunk and abusive father and are both still dealing with the emotional fallout even now they are adults. Brady has anger issues and is terrified of turning out like his father so he has vowed never to have a family of his own. He is terrified of putting a wife or child through the things that he and Alyssa had to deal with. His anger issues aren't just effecting his social life though, they are now threatening his army career and his chances of promotion. Brady loves life in the Special Forces but has been sent back to the states and told to get help dealing with his anger. He meets Joss and is instantly attracted to her but in spite of their explosive chemistry it was never supposed to be anything more than a one night stand between them. After realising that Joss is his new neighbour Brady struggles to stay away from her though and for the first time in his life he finds himself wishing he could have a future with someone.

Joss didn't have an easy childhood either, orphaned at a young age she grew up in children's homes and never felt that anyone really cared about or wanted her. She knows what it is like to feel rejected and is determined that she will never let anyone make her feel that way again. Brady is an irresistible force of nature though and she is pulled to him like a moth to a flame. Just when she thinks they might have something worth fighting for an unexpected pregnancy threatens everything. Brady's reaction leaves her feeling lost and confused but if there is one thing she is 100% sure about it is that she will never let anyone make her child feel as unwanted as she always has.

There is absolutely no doubt that Brady is a hero - the way he always looked after Alyssa, the job he does and even his protective instincts towards Joss all show that time and time again - but there are also times that he is a complete arsehole. At one point I wanted to slap him for the things he said to Joss and I was so glad that she made him suffer for his mistake because I'd have lost all respect for her if she had let him get away with it. As much as Brady was an idiot there were extenuating circumstances and he did genuinely regret the things he had done so I didn't find it too difficult to forgive him. Brady and Joss are both damaged people who have suffered a lot but you just know that together they can work through things and come out stronger on the other side.

One Night with a Hero is an utterly fabulous read and one that I can't recommend highly enough. I loved the relationship between Brady and Joss from the very beginning, their flirtatious banter had me laughing out loud and their chemistry left me needing a cold shower. This was the ultimate feel good book, one that took me through a whole range of emotions but left me with a huge smile on my face when I was finished. Laura Kaye has quickly become an author I know I can turn to when I'm looking for a sexy romance with engaging characters and an ending I can believe in and I can't wait to read more of her work. 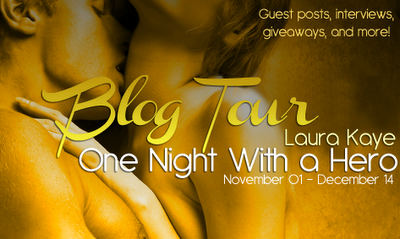