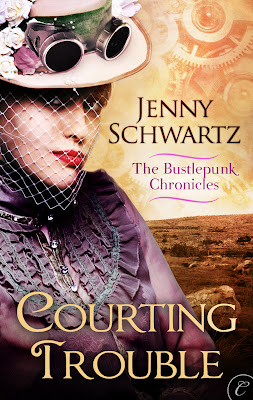 All suffragette Esme Smith wants is respect. Her beau, American inventor Jed Reeve, may be more enlightened than most men, but lately his need to protect her is at odds with her need for independence. Esme begins to wonder if a modern woman can share her life with a man without losing some of herself.

With his courtship of Esme stalled, the last thing Jed needs is the pressure of saving the Prince of Wales. But when blueprints for a sonic destroyer fall into his hands, he uncovers an anarchist plot that could have deadly consequences.

While investigating the threats, Jed is determined to keep Esme out of harm’s way, despite her protests. But when the terrorists capture Jed and demand a priceless emerald in exchange for his life, it’s Esme who must draw on all her strength to save the day.

Review:
I really enjoyed Wanted: One Scoundrel when I read it last year but I remember thinking that I would have liked to have seen more of the romance between Esme and Jed. At the time I didn't realise it was the first story in a series so it was a lovely surprise when I spotted that Courting Trouble had been published and I couldn't wait to read it.

The story picks up not long after the first one ended, Jed knows how he feels about Esme and is trying to court her but is struggling to find the best way to woo her. He admires the fact that she is an independent woman but all his instincts tell him to protect her and keep her safe from harm and the way he goes about it often end up getting him in hot water as far as Esme is concerned. Esme has strong feelings for Jed but she is worried that falling in love with him and getting married would mean giving up on her dreams of fighting for equality. Her work as a suffragette is very important to her and she doesn't want to have to chose between love and her independence. It doesn't help that Jed can be an overprotective caveman at times but even when he is irritating her she knows it is only because he cares.

Esme isn't a traditional woman and Jed soon comes to realise that a traditional courtship isn't the way to win her heart. If he wants to convince Esme that he is the man for her then he is going to need to come up with a way of proving that he trusts her and that he loves her just the way she is. When the pair uncover a plot to take the life of the Prince of Wales they must work together if they're going to save the day but just who is the damsel in distress and which one will come riding to the rescue?

This was another great instalment to the series and I really hope that this isn't the last we've seen of Esme and Jed. I love the Australian setting for these stories and think that there is plenty of scope for Jenny Schwartz to come up with more adventures with these characters. I'd consider the Bustlepunk Chronicles to be steampunk light - there are hints of steampunk in the technology used but these elements don't overwhelm the story and I think the series will appeal to fans of historical romance too. In fact, if you're new to the steampunk genre but a historical fiction fan then this might be a good place to start.