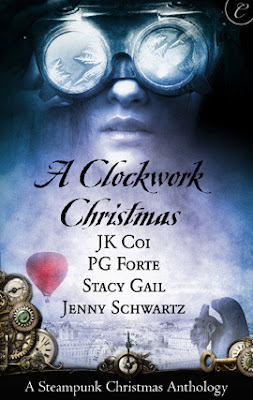 We Wish You a Steampunk Christmas

Changed forever after tragedy, a woman must draw strength from her husband's love. A man learns that love isn't always what you expect. A thief steals the heart of a vengeful professor. And an American inventor finds love Down Under. Enjoy Victorian Christmas with a clockwork twist in these four steampunk novellas.

Anthology includes:
Crime Wave in a Corset by Stacy Gail
This Winter Heart by PG Forte
Wanted: One Scoundrel by Jenny Schwartz
Far From Broken by JK Coi

For more information about any of these authors click on their names below to visit their websites:
Stacy Gail
PG Forte
Jenny Schwartz
JK Coi

A Clockwork Christmas is a fabulous anthology containing some really sweet Christmas themed steampunk stories and makes perfect holiday reading. I hadn't read anything by any of these authors before but I will definitely be keeping an eye out for more by all of them in the future. I'm going to review each of these stories separately but I would highly recommend this anthology to steampunk and historical romance fans.


Crime Wave in a Corset by Stacey Gail 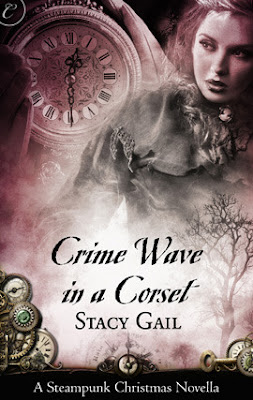 Roderick Coddington is on a mission to make Cornelia Peabody pay. After identifying her as the thief who stole a priceless Fabergé egg from his dying sister, he finds her and shackles a deadly timepiece to her arm. If she doesn't return the egg by Christmas morning, she will die.

Normally seven days is more than enough time for Cornelia to carry out the perfect crime, but Roderick's intrusion into her life is beyond distracting. He challenges her mind, and ignites her body with desire she's never felt before. But worst of all, he threatens the independence she values above all else...

As Roderick spends time with Cornelia, he realises there's a lonely soul hidden beneath her beautiful but criminal veneer. Falling for a thief wasn't part of Roderick's plan, but plans can change and he has no intention of letting another priceless treasure get away from him.

Review:
Cornelia didn't have the best upbringing and with having no education she falls back on stealing as a way to survive. She is highly intelligent and good at what she does so it comes as quite a shock when one of her victims manages to track her down. Roderick is determined to get revenge on Cornelia after she stole a priceless object from his beloved Beth who then died shortly after the robbery. He wants the Fabergé egg back and he's going to make Cornelia get it for him. When he shackles her with a deadly timepiece that will electrocute her if he doesn't disable it within seven days Cornelia knows she has to do what he asks but as Roderick gets to know her he realises that she isn't quite the cold heated thief she appears to be.

Crime Wave in a Corset is a sweet story and one that I thoroughly enjoyed. Cornelia may be a thief but she is a really likeable character and although she thinks of herself as heartless she is much nicer than she gives herself credit for. She has never had anyone she can rely on and believes herself completely unworthy of love. Roderick was devastated by the loss of Beth, he thinks Cornelia is the lowest of the low and is determined to get revenge on her. His threats to kill her make it hard to like him in the beginning but you can understand why he has such a low opinion of her. The last thing he is expecting is for the thief to steal his heart but the more time he spends with Cornelia the deeper she gets under his skin. It was sweet watching this couple get to know each other, their romance is hot and I enjoyed the steampunk elements to the story. A fun Christmas read and one I'd recommend to fans of historical romance and steampunk.


This Winter Heart by PG Forte 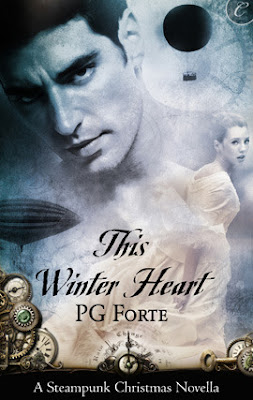 Eight years ago, Ophelia Leonides's husband cast her off when he discovered she was not the woman he thought she was. Now destitute after the death of her father, Ophelia is forced to turn to Dario for help raising the child she never told him about.

Dario is furious that Ophelia has returned, and refuses to believe Arthur is his son—after all, he thought his wife was barren. But to avoid gossip, he agrees to let them spend the holidays at his villa. While he cannot resist the desire he still feels for Ophelia, Dario despises himself for being hopelessly in love with a woman who can never love him back.

But Dario is wrong: Ophelia's emotions are all too human, and she was brokenhearted when he rejected her. Unsure if she can trust the man she desperately loves, she fears for her life, her freedom and her son if anyone else learns of her true nature...

Review:
When the death of her father leaves her destitute Ophelia has no choice but to turn to her estranged husband Dario for help raising their son. Ophelia never stopped loving Dario but when he discovered her secret he wanted nothing more to do with her. He didn't believe she could have children so when she shows up with seven year old Arthur is instincts are do deny that the child is his but it is impossible to ignore the resemblance between them. Can Dario forgive Ophelia for the secret she kept from him and is there any way they can save their marriage?

I'm not going to tell you Ophelia's secret because it would be a major spoiler but I have to say that the one problem I had with this novella was the fact that I didn't really understand quite what her father had done and I shared Dario's scepticism that she could have become a mother in the circumstances. If you can put that issue to one side though then This Winter Heart is an enjoyable story. Although it was easy to see why Dario was as upset by the revelation of Ophelia's secret as he was (I'd have felt exactly the same way if I was in his situation!) that doesn't excuse the way he is so cruel to her. There were a couple of times I wanted to slap him for the things he said to her and I really was starting to worry that they would never be able to work things out. However once he realises his mistake he works hard to convince Ophelia that he has changed and the couple are so cute together that you have to route for a happy ending. It is obvious that Dario loves his wife and was devastated by her deception so even though his behaviour was despicable it was fairly easy to forgive him.


Wanted: One Scoundrel by Jenny Schwartz 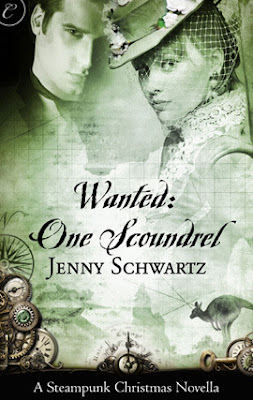 All suffragette Esme Smith wants is a man. A scoundrel to be precise. Someone who can be persuaded to represent her political views at men-only clubs. As the daughter of the richest man in Australia, Esme can afford to make it worth the right man's while.

Fresh off the boat, American inventor Jed Reeve is intrigued by Esme's proposal, but even more interested in the beauty herself. Amused that she takes him for a man who lives by his wits, he accepts the job—made easier by the fact that he already shares her ideals. Soon, he finds himself caught up in political intrigue, kidnapping and blackmail, and trying to convince his employer he's more than just a scoundrel...

Review:
Esme is a fierce believer in equality between the sexes and has set up a political party to campaign for it. She had hoped to lead the party herself but as she is unable to enter the men's clubs where politics is such a hot topic she realises she is going to need a representative. After deciding to hire a scoundrel to spread her vision her uncle introduces her to Jed. Now Jed isn't quite the scoundrel he first appears to be but he's prepared to go along with Esme's plan if it gives him the chance to get to know her better.


Although there is some steam technology I feel that Wanted: One Scoundrel is more like a historical romance than steampunk. That didn't stop me from enjoying the story though and I loved reading a historical story set in Australia. I did feel that the story focused a little too much on Esme's political ambitions, I would have liked more time spent on the actual romance but either way I really liked both Jed and Esme. This was an enjoyable story and one I think historical romance fans will enjoy even if they aren't keen on steampunk as a genre.
Far From Broken by JK Coi 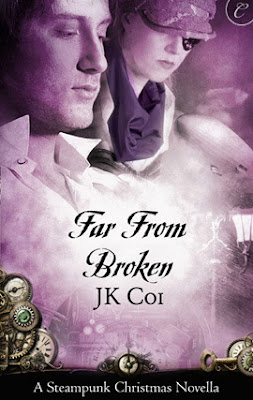 Colonel Jasper Carlisle was defined by his work until he met his wife. When the prima ballerina swept into his life with her affection, bright laughter and graceful movements, he knew that she was the reason for his existence, and that their love would be forever.

But their world is shattered when Callie is kidnapped and brutally tortured by the foes Jasper has been hunting. Mechanical parts have replaced her legs, her hand, her eye...and possibly her heart. Though she survived, her anger at Jasper consumes her, while Jasper's guilt drives him from the woman he loves. He longs for the chance to show her their love can withstand anything...including her new clockwork parts.

As the holiday season approaches, Jasper realises he must fight not just for his wife's love and forgiveness...but also her life, as his enemy once again attempts to tear them apart.

Review:
When Jasper's wife Callie is captured at tortured by his enemies she suffers horrific injuries and comes close to death. Jasper is desperate to keep his wife alive and agrees to life altering surgeries to keep her with him. When Callie wakes up to discover her eye, hand and legs have been replaced by mechanical equivalents she is horrified. Once a beautiful prima ballerina she now believes she is a monster and that she will never be able to dance again, she would rather have died in the attack than live the rest of her life with a body that isn't fully hers. Jasper is wracked with guilt for failing to protect Callie in the first place and because she hates what he allowed to be done to her. Can Callie come to terms with what happened and forgive Jasper for his part in it?

Far From Broken was a surprisingly dark story and one that had me hooked from the beginning. It was easy to relate to both of the main characters, Callie had been through a terrible ordeal not only at the hands of her torturers but also in the military hospital where her body was changed dramatically without her permission. Although her mechanical limbs kept her alive she wasn't sure if it was a life worth living and it took her time to come to terms with everything that had happened. Jasper will never forgive himself for the fact that she was tortured because of him. If he wasn't a spy she wouldn't have been in danger and he feels he should have been at home to protect her. It was easy to feel both of their emotions and I was routing for them to work things out and find a way to move forwards together. Definitely a highly recommended read.