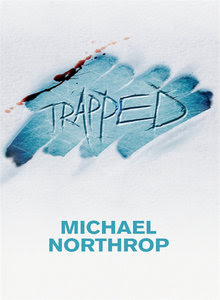 The day the blizzard started, no one knew it was going to keep snowing for a week.

Scott and his friends are among the last seven kids at their school waiting to get picked up that day and they soon realise that no one is coming for them.  Still, it doesn't seem so bad to spend the night there, especially when Krista and Julie are sleeping just down the hall.

Then the power goes out.  Then the heat.  The pipes freeze.  The roof shudders.  As the days add up, the snow piles higher, the empty halls grow colder and darker and the mounting pressure forces a devastating decision . . .

Review:
Trapped is the story of seven teenagers who are left stranded at their school in a terrible blizzard.  As the snow storm continues their situation gets worse and worse and it seems less likely that they will be rescued.  It's a fight for survival but will they all make it through?

I wasn't too sure what to expect when I picked up Trapped, I was a little worried that it might be too scary for me but although the story was very creepy in places it didn't frighten me as much as I expected.  The story definitely makes you feel claustrophobic though and I also found myself shivering as I read about the ever increasing levels of snow (I actually had to curl up in a blanket to continue reading the book!).

I enjoyed the interaction between the students and watching them get to know each other better.  The story is narrated by Scotty who stayed late with two of his friends (Pete & Jason) to work on building Jason's go-kart.  Scotty feels quite lucky to be trapped with his best friends, he feels it gives them an advantage over most of the others who didn't really know each other before becoming snowed in, but the longer they are stuck with no sign of rescue the more their tempers begin to fray and the friends are at risk of turning on each other.  On the other hand you have kids from completely different social groups who would normally never even talk to each other that realise they have more in common than they would have expected as they get to know each other.  It was really interesting to see the unexpected friendships that start to develop as the story continues.

I think I was expecting their fight for survival to be harder than it was, not to say that they had an easy time of it because that is far from true, but they had access to a ready food supply and managed to quickly come up with ways to get water and some heat.  I guess it makes sense that a school would have plenty of food supplies but it did make the story a little less dramatic than it could have been.  This was still a story that I couldn't put down though and it did make me think about whether I would have survived in similar circumstances.  By the time I'd finished reading I wanted to go to the supermarket and stockpile food just in case of a snow storm.  This was an enjoyable read and one that makes for very creepy winter reading, just make sure you're sitting in front of a roaring fire before you pick it up!