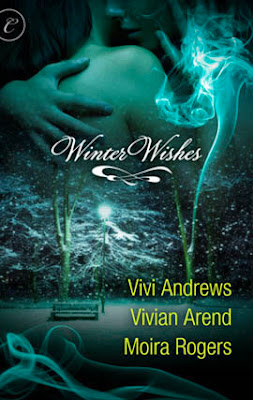 A Twist on Tradition

A woman has the Christmas Eve from Hell. Two cat shifters play naughty games. And a witch brings out the beast inside the man. The magic of the season takes on a whole new meaning in these three fantastic—and festive—novellas from some of the best voices in paranormal romance.

For more information about any of these authors click on their names below to visit their websites:
Vivi Andrews
Vivian Arend
Moira Rogers

I'm a big fan of Vivian Arend and Moira Rogers and I was looking for a holiday read so the Winter Wishes anthology seemed perfect.  I really enjoyed the anthology and would highly recommend it to paranormal romance fans looking to get in the Christmas spirit. 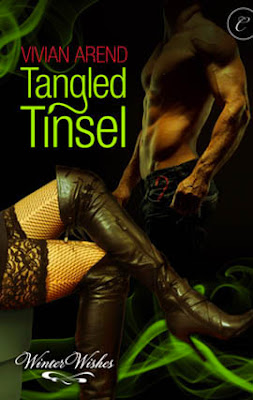 She's the cat's meow, and he's ready to pounce!

Five miles of leather-clad leg is all it takes to lure Kyle Branegan out from his hidden lifestyle as part of the Cougar Corp, a secret branch of the Shifter Enforcer League. He's hoping for a night of fun and frolic, cat-style, no strings attached. With a sultry swing of her hips, Eloise Scott tangles him up in her ball of tricks, and just when he thinks he's about to get lucky, she cuffs him—naked—to her bed.

An undercover cop in the human police force, El's been given a top-secret mission to keep the big cat under her paw until he's needed to testify in court. Her decision to take him home for a quiet Christmas in her sleepy hometown turns out to be far more interesting than she expected. Her parents are suddenly rich, her old boyfriend is sniffing around and all six-feet-plus of sexy cougar male is sleeping in her bed.

And that's before they announce their fake engagement...

Review:
Kyle works undercover for a secret organisation who police shape shifters, making sure any of their less acceptable behaviour is kept out of the public eye.  Even though he should have his mind on his latest job as soon as he spots fellow cougar shifter Eloise he can't resist taking a break to pursue her.  As it turns out El is actually an undercover police officer and her latest mission is to monitor Kyle and make sure he is available when he is needed at an upcoming trial.  Deciding to take him home with her to visit her eccentric family for the holidays leads to all sorts of unexpected complications for the pair of them.

I'm a massive fan of Vivian Arend's Granite Lake Wolves series but I have to say I think I might like her cougar shifters even better!  I'm really hoping that Tangled Tinsel is going to be the first story in a new series as I think there is plenty of scope for more fun stories with Kyle and El at the lead.  Kyle also has two brothers so the possibilities are endless.  I loved this novella from the moment I picked it up, full of humour it had me laughing out loud several times while I was reading.  The main characters are both fab, the chemistry is scorching hot and I loved the way their relationship develops throughout the story.  The Christmas scenes with El's family make it a perfect holiday read and I'm sure I'll be picking up this story again next year.


No Angel by Vivi Andrews 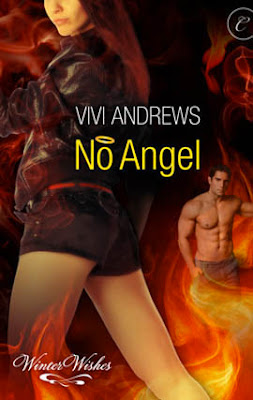 When Sasha's boyfriend, Jay, is sucked through a fiery vortex to Hell, an angel reveals that Sasha's been chosen as the Champion of Virtue in the battle for his immortal soul. As a perennial offender on Santa's naughty list, Sasha can't believe she's anyone's idea of a girl fighting on the side of the angels. But if she doesn't save Jay, he'll be stuck in Hell forever!

Jay—aka Jevroth—isn't surprised to find himself back in Hell. His visa to visit the mortal plane expired three months ago, but to steal more time with Sasha he's been ignoring his mother's demands that he come home to spend time with his new stepfather: Lucifer.

Sasha has until dawn on the twenty-fifth of December to fight the Legions of Hell and rescue Jay, or be trapped there for eternity herself. But now she must decide if the lying son-of-a-demon is even worth saving...

Review:
When Sasha's boyfriend refuses to spend Christmas with her family and tells her that they "need to talk" she assumes the worst and thinks she is about to be dumped on Christmas eve.  But before Jay can tell her his big secret she gets to witness as he is sucked into hell.  Sasha is given the option of entering hell to try and rescue him but if she fails she will find herself trapped there with him.  When she discovers his secret she'll have to decide if she even wants to save him after all the lies he has told her.

This is the first story I've read by Vivi Andrews and although it wasn't my favourite story in the Winter Wishes anthology I liked it enough to check out more of her work in the future.  I really liked Jay's character, I enjoyed the scenes in hell with him and his family - his mother really is a piece of work but I was surprised to find myself quite liking his step dad.  I didn't really like Sasha all that much though, she was constantly complaining that Jay was too good for her and that she preferred bad boys but if that was the case I couldn't see why she even wanted to be with him in the first place.  It made it difficult to believe in their relationship, although I did see more of a connection between them towards the end of the book once she has discovered his secret.  I also started to like Sasha a lot more when she stepped up to fight the demons and rescue her man.  No Angel has humour, action and was a fun quick read. 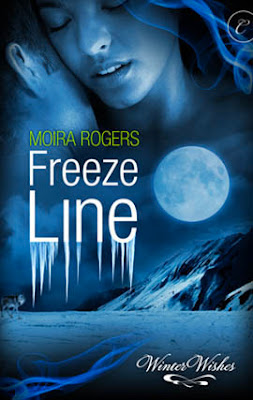 She can't survive in his world; he can't stay sane in hers

A twenty-first century ice age dulls the magic that emanates from the earth. Shane Sullivan is a lone wolf above the freeze line. He has no desire to join the packs that range closer to the border, where feral instincts can turn a man into a monster. Not until the winter solstice, when he stumbles across a dying witch who needs his help to get back to her people—and her magic—in the south.

Nadia is a powerful woman in her own world, but she's been drained by her escape from captivity in a northern lab. She knows it's foolhardy to trust a werewolf, but he's her only chance to survive the vast white wilderness. The farther south they travel, the harder it is for Shane to keep the beast within under control, and as their mutual attraction intensifies, Nadia's no longer sure she wants him to.

Review:
An ice age has split the world in two, above the freeze line the cold has dulled the earth's magic making it a safer place for werewolf Shane to live.  The last thing he wants is the magic calling to his animal nature.  Nadia is a witch who needs to be able to connect to the magic to survive, she was kidnapped and forced above the freeze line so that she was unable to protect herself using her magic.  She may have escaped but she needs to find a way home and restore her energy levels or she won't survive.  When Shane finds Nadia by the side of the road and discovers what has happened to her he offers to help get her back to the other side of the freeze line.  As they approach their destination Nadia becomes stronger but Shane's wild side gets closer to the surface, can they fight the attraction that is growing between them?  Do they even want to?

I was already a big fan of Moira Rogers so it was no surprise to me that I loved Freeze Line.  With the apocalyptic setting this story is darker than the other novellas in the Winter Wishes anthology but I really enjoyed the world building and would happily read more stories in this world if it becomes a series.  Shane and Nadia are both great characters and I love the way their relationship develops as the get to know each other.  This was a sweet and sexy romance and one I'd definitely recommend.