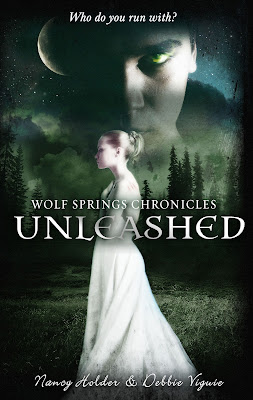 Who do you run with?

It's always tough being the new kid in town.  And even worse when you have to live with your grandfather in the middle of a forest.

But when Katelyn starts at Wolf Springs High  she realises that her new life might not be so bad.  There's the enigmatic Trick, who is always there to protect her.  And Cordelia Fenner and her irresistible brother seem extra friendly.

Katelyn suspects that there is more to the Fenner family than meets the eye.  But why is she so drawn to them?  And in a town full of secrets, who can she trust?

Wolf Springs Chronicles:
Unleashed
No information on titles or release dates for further books in the series is currently available.

Review:
It's not been easy for Katelyn, since the death of her mother she has had to leave her home in LA and move to a house in the middle of nowhere to live with the grandfather she hadn't seen for years.  Life in Wolf Springs is completely different from what she is used to and making friends is hard when everyone around her has known each other for years.  Add to that the strange behaviour of her class mates and the mysterious deaths of two young girls found in the forest and Katelyn begins to see danger at every turn.

Unleashed is the first book in the new young adult Wolf Springs Chronicles series by Nancy Holder and Debbie Viguie.  I enjoyed their writing style, liked the main character and am curious about the setting but I did feel that it was a little slow getting to the supernatural part of the story.  It is quite clear from early on that something strange is occurring in Wolf Springs and it doesn't take a genius to know that we're on the look out for werewolves but it seemed to take forever for anything to actually be revealed.  Don't get me wrong I still enjoyed the story but I would have liked more explanation of what was happening, even at the end of the book I feel like I have a million questions.  We're also left with a killer cliffhanger which is a nightmare when there is currently no release date for the next book in the series!

I liked Katelyn, she has been through a lot which makes it easy to sympathise with her but there were times when does some incredibly stupid things that practically had me shouting at the book.  I would have liked to have learnt more about her gymnastics training, it was so important to her at the beginning of the book but she kind of forgot all about it after her move to Wolf Springs.  Although she would mention it occasionally (particularly to worry that if she didn't keep up her training she would lose her skill) she made no attempt to find a trainer or even to practise on her own which seemed out of character.  What I liked most was the way her relationship starts to develop with her grandfather as the story progresses.

There is another love triangle which I have to admit I'm becoming a bit bored of now.  I liked Trick but am suspicious of him, he seems to blow hot and cold and I'm sure we will eventually find out that he is keeping a major secret.  I wasn't at all keen on the second potential love interest though - there is only one word for Justin and that is creepy.  I didn't find anything likable about him, from the fact that he was cheating on his long term girlfriend to try it on with Katelyn to the weird power he seems to have over her it all just raises a big red warning flag.  I also lost respect for Katelyn when she continued to go after him even after discovering he had a girlfriend and even when she still seemed keen to try and get together with Trick.  I really can't stand people who cheat on their partners, there is never an excuse for that.

At first I really didn't like Katelyn's new friend Cordelia (and if I'm honest I'm still suspicious of her) but after meeting her evil sisters and the actions of her father I do feel sorry for her.  It will be interesting to see how things play out as the series progresses, especially after events at the end of the book.  Although I had a few issues with Unleashed I'm still curious to see what happens in the next installment of the series.  I think now that we have finally started to find out more about the supernatural happenings that the story line for the next book will be much faster paced and hopefully a lot of my questions will be answered.

Source: Received from RHCB in exchange for an honest review