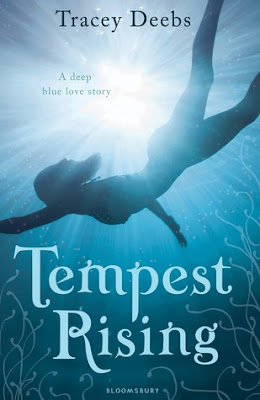 Tempest Maguire wants nothing more than to surf the killer waves near her Californian home and hang out with her boyfriend.  But Tempest is half mermaid and, as her seventeenth birthday approaches, she will have to decide if she really does want to stay on land or if she wants to give herself to the ocean like her mother did before her.

When she meets Kona, a gorgeous surfer whose uncanny abilities also hint at an other-worldly life, the lure of the sea becomes too strong and Tempest finds herself in the midst of a battle for survival.  The entire ocean's future hangs in the balance.

Is she brave enough, and strong enough, to help save everything?

Review:
Tempest is fast approaching her seventeenth birthday but unlike most teenagers she isn't looking forward to celebrating.  As a half mermaid she knows she will be faced with a difficult decision - will she chose to stay on land with her family and friends or will she pick life in the ocean, abandoning her family just like her mother did six years ago?

I've read a few mermaid books this year and have enjoyed the different takes on mermaid mythology and the various underwater worlds that the authors have created.  Although I enjoyed Tempest Rising I don't think it was as strong as some of the other books I've read.  I'll have to warn you there will probably be a few minor spoilers in my review because I can't explain what I didn't like about it without giving some information.

My main problem was that I didn't really like the main character Tempest.  At first we meet a very laid back girl who is obsessed with surfing with her friends and boyfriend but who also cares deeply for her family and has helped raise her younger brothers since their mother deserted them six years ago.  Tempest obviously has issues since being abandoned by her mother and I really felt for her when she was worrying about the decision she needed to make for her own future.  She didn't want to be someone else who abandoned her family and left them heartbroken.  I even forgave her for the way she was so mean to her boyfriend Mark because she had so much going on.  Poor Mark has been her on again, off again (but mostly on) boyfriend for two and a half years and they are supposedly madly in love but she treats him appallingly.  For example, Tempest nearly drowns in a surfing accident, she is saved by Mark and then when he shows that he is concerned about her she gets really angry with him and refuses to talk to him.  Well excuse Mark for being a nice boyfriend - I guess you'd prefer him not to care that you nearly died!

Then Kona comes on the scene, the mysterious (but oh so hot) surfer that appears from nowhere and disappears just the same.  Tempest is so in love with her boyfriend Mark that she of course is immediately drawn to Kona and seems to completely forget that Mark even exists.  Kona obviously knows about her supernatural abilities and the choice she has to make but absolutely refuses to tell her anything which must make him completely trustworthy and just adds to the attraction (you'll have to forgive my sarcasm).  So when Kona disappears it makes perfect sense for Tempest (who previously was determined never to abandon her family) to follow him without a second thought.

Now I absolutely hate a cheater so when Tempest hooks up with Kona despite the fact that she is still dating Mark that immediately gets my back up.  As nice as Kona is and as much as they are obviously meant to be together I don't care about either of them anymore and am not interested in their relationship.  What made it even worse was the way the author tried to justify Tempest's actions.  When Tempest returns nobody knows that she has been unfaithful but her friends are happy to tell her that Mark has been looking at another girl.  So although Mark hasn't cheated and Tempest has it is Mark who looks like the bad guy and Tempest doesn't bother to put anyone right.  In fact she just makes herself feel better by letting Mark off the hook, telling him that it's ok if he wants to be with someone else & that they're better off as just friends.  I was about ready to throw the book at that point so don't even get me started on the ending.  I'm not going to spoil it by telling you what happens but it irritated the heck out of me.

As much as I've complained about the book I did really like the underwater world that Tracy Deebs has created, the mythology around the mermaids, their history and the enemy that Tempest has to face were all really interesting and were what kept me reading.  The action scenes are well written, the author was able to play on my heart strings and I did feel for Tempest before she started two timing Mark.  I actually really liked Kona too, just not the way Tempest's relationship with Mark wasn't resolved before she got together with him.  So despite the problems I'd still say it is worth giving Tempest Rising a try if you're looking for a mermaid story and I probably will pick up the sequel when it comes out next year.

Source: I was given this book by my lovely friend Kirsty from The Overflowing Library