Fracture by Megan Miranda is one of the 2012 debuts that I'm really looking forward to reading.  This is being published in the UK on the 5th of January by Bloomsbury so luckily we don't have too much longer to wait now! 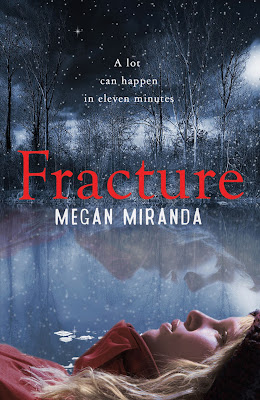 If you had one day left to live, what would you do?

Eleven minutes might as well be eternity underwater. It only takes three minutes without air for loss of consciousness. Permanent brain damage begins at four minutes. And then, when the oxygen runs out, full cardiac arrest occurs. Death is possible at five minutes. Probable at seven. Definite at ten. Delaney Maxwell was underwater for eleven minutes. And she’s alive.

By the time seventeen-year-old Delaney is pulled out of the icy waters of a frozen lake, her heart has stopped beating. She is in a coma and officially dead. But Delaney pulls through. How? Doctors are mystified. Outwardly she has completely recovered. But Delaney knows something is very wrong. Pulled by sensations she can’t control, she finds herself drawn to the dying. Is her brain predicting death or causing it?

Then Delaney meets Troy Varga, who lost his whole family in a car accident and emerged from a coma with the same powers as Delaney. At last she’s found someone who’ll understand what she’s going through. But Delaney soon discovers that Troy’s motives aren’t quite what she thought. Is their gift a miracle, a freak of nature – or something much more frightening?

I love the fact that this one looks so different from my usual paranormal reads and I think it's going to be really interesting.  What do you think?  Is this one you're looking forward to?
at 09:00