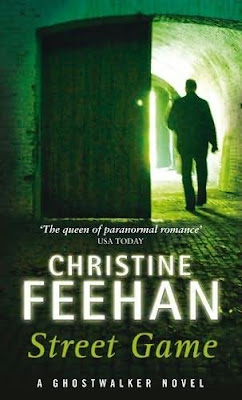 For Mack McKinley and his team of GhostWalker killing machines, urban warfare is an art.  Danger is just another part of the game - but now Mack's come face-to-face with a woman who can play just as tough.

Review:
I'm a big fan of Christine Feehan's GhostWalkers series but I would definitely recommend reading the series in order because you would be missing a lot of back story to pick up the series starting with Street Game (which is actually book 8).  I have to admit that I was a bit confused when I picked this one up and realised that Christine has now moved on to the third group of GhostWalkers.  It's not that I don't like the new group, more that there are still so many characters from the first 2 groups that I've been hoping to find out more about!  I was disappointed to find that there was no interaction with any of the members of the previous two groups throughout the whole book, in fact the only cross over to make it part of the same series is that the bad guy is still Doctor Whitney and he still has a whole host of unknown people helping cover his tracks and allowing him to continue his illegal and immoral experiments.

Mack and his team have a much stronger bond than the first two teams of GhostWalkers, they all grew up on the streets together and have had each others backs since they were children.  They know each other inside out, can predict how everyone else thinks and will react in different situations and they have a great rapport which allows for a lot of fun banter between them.  Jaimie was part of their group as a child and joined the GhostWalker program alongside them but when she left Mack two years ago she abandoned the rest of the team as well.  They all think of her as a sister so when Mack stumbles back into her life she not only has to deal with her very alpha and controlling ex who wants her back but she also has a bunch of protective older brothers on her case.  I liked Jaimie but I do think she caved in too easily to the demands of Mack and the others, I would have liked to see her stand up for herself a bit more.  I alternated between wanting to slap Mack and wanting to hug him.  At times he absolutely drove me insane and if I could have shook some sense into him I would have done but then he'd show a softer, more vulnerable side that melted me just a little bit.

I really hope that we're going to get some kind of resolution to the Whitney plot line soon, I'm starting to have trouble keeping up with who the bad guys are, which GhostWalkers are part of which team and all the evil deeds that the doctor has committed.  It would be nice to see Christine Feehan move the series in a slightly different direction now.  The story has left things set up nicely for Kane's story (which is up next in Ruthless Game) but I'm also curious to find out more about Jaimie's friend Joe and I'd love to see more of Javier too.  What I'd really like in the next book is some more interaction with the previous two teams though, I want to know how all the other couples are getting on and it would be good to have everyone working together for some kind of big show down but I guess I'll have to wait and see if that happens.

Street Game seemed to focus a little less on the romance than some of the more recent books have which isn't necessarily a bad thing but I would have liked a little more than we got.  I also found the plot moved a bit slower than normal.  There seemed to be a lot of sitting around and waiting for something to happen and the only thing that stopped me from getting bored was the banter amongst the team the fact I was getting to know a new set of characters.  This wasn't my favourite book in the series but it was still an enjoyable installment and I'm looking forward to finding out what happens next.