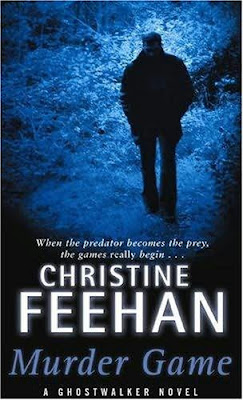 Games should be fun, but for two expert teams across the country, they're literally murder - because the winning team is the one that gets the most kills.  The participants in this violent challenge are rumoured to be genetically enhanced warriors known as GhostWalkers.  And Kaden Montague isn't happy about it.

Kaden - a GhostWalker himself - is determined to clear their name, and he's going to need the help of psychic Tansy Meadows to do it.  But as soon as he sees her, he knows his mission will be more complicated than he imagined - and the 'murder game' may not be at all what it seems.

Review:
When a spate of murders across the country look like they have been committed by GhostWalkers Kaden is given the task of tracking down the killers and eliminating them.  He doesn't believe his friends could be the murderers but if they are to blame he will have to take them down, unsure where to turn for help he decides to contact Tansy who has been known to help the police track down serial killers with her psychic abilities.  Tansy has always suffered from a powerful backlash when she uses her abilities and after the last case she worked on left her in a psychiatric ward suffering from a breakdown she decided enough was enough.  She told all her contacts that she has lost her ability and took to the wilderness to become a wildlife photographer, avoiding human contact as much as possible.  Kaden doesn't believe her ability has gone and one way or another he is going to get her help.

I'm a big fan of Christine Feehan's GhostWalker series and Murder Game didn't disappoint.  As the series progresses we are discovering more about Whitney and the crazy schemes he has put into place, he may be a genius but he certainly isn't a sane one.  I'm beginning to wonder how the GhostWalkers will ever be able to track him down and put a stop to his experiments - he seems to be at least 10 steps ahead of them every time.  I'd recommend reading the series in order to make the most of that ongoing story line but I think each of the books can be read as stand alone stories when it comes to the relationship between the main characters.

Tansy is probably one of my favourite heroines in the series, she has the ability to touch an object and read the thoughts of the people who have held it in the past.  Despite the fact that using this ability causes her a lot of pain and she is never able to get the thoughts of the killers or their victims out of her head she has been helping the police since she was just 13 years old.  Knowing that she will feel the pain of the victims with every murder she investigates she is incredibly brave to keep putting herself through so much suffering in order to track down the murderers.

Kaden has no idea of the toll Tansy's abilities take on her when he first asks for her help.  He is infuriated that she refuses to assist him and finds a way to trick her into touching an object found at one of the murder scenes.  After seeing how much she suffers he realises that he can't ask her to help him further but once Tansy has started an investigation she refuses to stop no matter what the risks are.  Whenever we've seen Kaden in previous books he has been shown as an ice cold, emotionless killer but as soon as he sees Tansy you start to see him thaw.  He is quick to accept that Whitney has genetically paired them and he becomes surprisingly protective of her.  My only irritation was the fact that he constantly wanted to take control of every situation, I'd have liked to see Tansy stand up for herself a bit more but this did improve towards the end of the book.

If you've read any of the other books in this series then you'll know to expect plenty of hot smut and although Murder Game has a lot of violence it also has some great sex scenes that certainly raise the heat levels.  I loved the fact that we get to spend time with some of the GhostWalkers we've already met in previous books, it was nice to find out how Ryland, Gator & Nico are doing and I'm really hoping that we get to see Jeff and Ian's stories soon.  If you're a GhostWalker fan you're sure to enjoy this installment and I can't wait to pick up Street Game to find out what happens next.