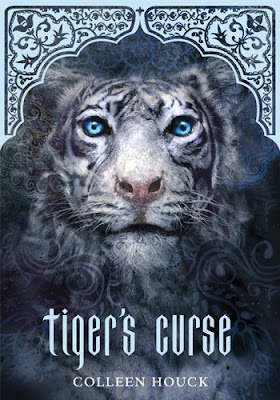 Passion.  Fate.  Loyalty.
Would you risk it all to change your destiny?

The last thing Kelsey Hayes thought she'd be doing this summer was trying to break a 300-year-old Indian curse.  With a mysterious white tiger named Ren.  Halfway around the world.

But that's exactly what happened.

Face-to-face with dark forces, spell-binding magic, and mystical worlds where nothing is what it seems, Kelsey risks everything to piece together an ancient prophecy that could break the curse forever.

Tiger's Curse is the exciting first volume in an epic fantasy-romance that will leave you breathless and yearning for more.

Review:
Kelsey is just looking for a summer job to save money for college when she finds herself working for a circus and spending time with a beautiful white tiger.  Little does she realise that Ren is actually an Indian prince who was cursed and has spent the last 300 years as a tiger living in captivity.  With Kelsey's help Ren must travel to India and try to find a way to break the curse.

As soon as I read the description of Tiger's Curse I knew I had to read it and I'm so glad I did!  I love paranormal stories and shape shifters in particular but what I enjoyed most about Tiger's Curse is that it is so different from anything else I've read.  Due to the curse Ren is only able to spend a short amount of time each day in his human form, the rest of the time he is a beautiful white tiger unable to communicate with those around him.  I loved that most of the story takes place in India, this is somewhere I've always wanted to visit but now even more so.  Colleen Houck has done a fantastic job of describing the settings and it was easy to picture the jungle and the temples Kelsey and Ren visited.  She has also woven a lot of Indian mythology and legends into the story which I found fascinating to read.

I liked Kelsey as the main character, she was a little too naive to start with but soon becomes more aware of the dangers she faces.  Throughout the book she is a strong heroine and she is determined to do whatever it takes to help Ren and free him from his curse.  Ren is a hero to swoon over and I'll admit I may have fallen just a little bit in love with him!  I loved watching their relationship develop but I was pleased that although Kelsey is immediately drawn to Ren she is also very aware of the fact that she doesn't know him well and doesn't instantly start declaring her love for him like some of the heroines I've read about.  I've said before that instant lust I can relate to but instant love doesn't usually come across as believable to me.  If the gorgeous Ren wasn't enough to make you weak at the knees you also have his handsome brother Kishan to contend with.  I'll admit I'm still a bit wary of Kishan but I understand we'll get to see a lot more of him in the sequel and I'm curious to find out more about him.

Tiger's Curse is the kind of book I wanted to devour in one sitting (even if it does have 500 pages!), if I'd had a whole day free I would have done nothing but read the story and I'm desperate to get started on the next book Tiger's Quest.  If you're looking for a story full of romance, in a beautiful setting with an adventure that will remind you of Indiana Jones look no further.  I'd recommend this book to anyone and am off to read the sequel now!

Other Reviews:
Confessions of the Un-Published
If you have reviewed this book on your blog please leave a link to your review in the comments & I'll add the link here.