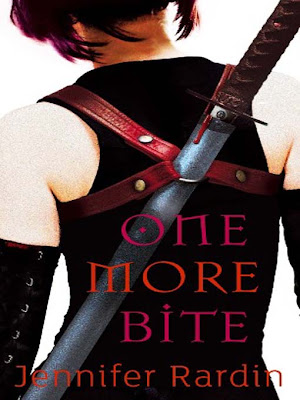 It's Jaz Parks checking in, with the latest in dark supernatural double-dealing.

I've already smoked the guy who was the pain in the CIA's you-know-what for the past few years.  But now, in the power vacuum left by the death of Edward 'The Raptor' Samos, a struggle for supremacy has begun between his former allies.

The CIA feels the balance must be maintained.  So when a Valencian Were agent discovers a plot to assassinate the Coven of Inverness' leader, me and my vampire hottie (and boss), are drafted in.  Our mission - to take out the woman hired to do the deed, a killer who might be as wily and Gifted as ourselves.

So it's off to the Scottish Highlands for some twisted fun among murderers, demons and half-crazed relatives.  Sometimes being a top-secret CIA assassin isn't all it's cracked up to be.

Jaz Parks Series:
Once Bitten, Twice Shy
Another One Bites the Dust
Biting the Bullet
Bitten to Death
One More Bite
Bite Marks
Bitten in Two
The Deadliest Bite (2011)

Review:
Since Jaz and Vayl's team managed to destroy the Raptor his allies have been fighting amongst themselves to see who is going to take his place.  The CIA are trying to maintain the balance so when they discover that someone has hired a hit woman to take out the coven leader of one of the main groups they decide to send Jaz and Vayl to stop the hit.  So the team is going on a trip to Scotland and they're going to have their work cut out if they want to stop the mercenary in time.

I was a little bit disappointed with the last book in this series (Bitten to Death) so I was pleased to find that things are getting back on track in One More Bite.  I still missed having Cassandra and Bergman in this installment, I really love it when the whole team is together so I'm hoping to see that happen in the next book.  I have to admit that this was more than made up for by the fact that Albert (Jaz's dad) was with them on the mission though.  He had me laughing out loud with his antics and I really enjoyed the bickering between him and Jaz.  I was glad we got to find out more about Jaz's family background, things have been alluded to in the previous books but we never had too much information about why she hates her mother so much so it was good to get some clarification on that.  I understand Jaz's reactions to certain things a lot better now.

I'm so relieved that things still seem to be going well between Jaz and Vayl, I was hoping for a little more relationship development but they are still slowly moving in the right direction.  I was worried when I realised that Cole was going to be playing a major part in this installment, he annoyed me just from the sidelines in the last book and I really wasn't looking forward to having to put up with more of him this time.  I was actually pleasantly surprised though and he didn't irritate me anywhere near as much.

The story line was well written, included a lot of humor, plenty of action and added some new supernatural elements to the series.  I'm looking forward to reading the next installment.