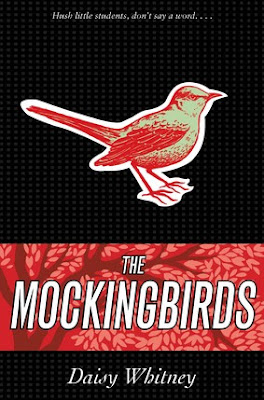 Some schools have honor codes.
Others have handbooks.
Themis Academy has the Mockingbirds.

Themis Academy is a quiet boarding school with an exceptional student body that the administration trusts to always behave the honorable way - the Themis way.  So when Alex is date-raped during her junior year, she has two options: stay silent and hope someone helps her, or enlist the Mockingbirds - a secret society of students dedicated to righting the wrongs of the student body.

In this account of a teenage girl's search for her voice and the courage to use it, debut author Daisy Whitney reminds readers that standing up for someone, especially yourself, is worth the fight.

Review:
I'm finding it really difficult to write a review for The Mockingbirds because I have such mixed feelings about the story.  Although I'm usually very careful to avoid spoilers in my reviews I'm going to warn you now there will be spoilers here because I can't talk about what I disliked without going into detail.  I'll start by saying that I applaud the author for tackling such a hard topic as date rape, this is something that she suffered herself when she was at college and she has done a great job of capturing the emotions that Alex goes through when she realises what happened to her.  It is easy to sympathise with Alex and what she has suffered, she goes through phases of confusion, doubt and worrying that it was her fault.  She is embarrassed that something like this could have happened especially when Carter starts spreading rumors that she was desperate for it and other students start acting as if she is easy.  It takes a lot of convincing from her friends to make Alex speak out and tell people what happened to her but although I was glad she found the courage to talk this is where the story started to fall down for me.

If her friends had encouraged her to go to the police or a teacher at her school it could have been a powerful message to other teens who may find themselves in a similar situation.  In reality she was convinced to take her case to the Mockingbirds - a group of students who are there to stop injustices happening on campus.  We are expected to believe that although all of the students at school are aware the Mockingbirds exist not a single teacher knows anything about them.  I was horrified by the lack of adult supervision in the story, the teachers are shown as ignorant and oblivious and refuse to accept that their gifted students could possibly do anything wrong.  Despite the fact that the story is told over several months Alex doesn't once mention a phone call from her parents, even though Alex hasn't told them about the rape surely they would want to know how she was getting on at school?

When it comes to the Mockingbirds I actually thought that the idea of a justice system run by students was really interesting.  If the group had a teacher involved and dealt with more minor issues then I think it could have been really effective, the way they run a trial and decide on a suitable punishment was a great idea.  However, I didn't think this was a suitable way to deal with a rape on campus - in my opinion this was definitely something that needed police involvement.  I was uncomfortable with some of the actions taken by the Mockingbirds too, when they agree to take Alex's case they immediately start revoking Carter's privileges (how they were able to do this without the teachers realising something was up is beyond me!).  Rumors are spread about Carter, problems are caused for the whole water polo team and his life is made miserable - all before the "trial" that proves his guilt.  If Carter had actually been found innocent he would have suffered the worst kind of bullying by the very people who are supposed to protect the other students.  Just because he is eventually found guilty doesn't make their actions any better!

The main reason I don't think the Mockingbirds work for a case like rape is that the punishment doesn't fit the crime.  As there is no police (or adult) involvement there will be no record of Carter's offence and as soon as he leaves school his punishment is finished.  What happens if he re-offends in the future?  I'm horrified by the message that sends to teenagers!  In another of the cases taken on by the Mockingbirds a student who took a knife to someone received no punishment at all because the case was tried just before graduation.  The victim states that they were pleased with the outcome because although nothing came of it the case proved that the other person was in the wrong - I'm sorry but I was disgusted by that attitude.

While I understand that the author was trying to encourage victims to find their voice and speak out I think this powerful and important message was lost in the way the case was handled.  While I have no problem with literature about date rape being aimed at teenagers, in fact I think there should be more about this topic, I do think it should encourage victims to talk to a trusted adult and hopefully take the case to the police.

Source: Received as part of a book tour arranged by UK Book Tours, this book has already been sent on to it's next destination.