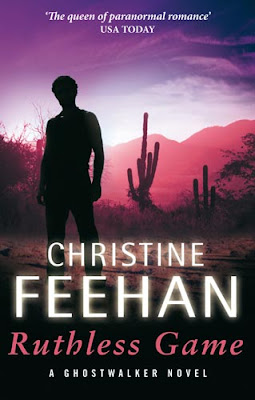 On a mission to rescue hostages in Mexico, the last thing GhostWalker Kane Cannon expects to find is Rose Patterson - fellow GhostWalker, fugitive, and pregnant with his child.

Forced into a breeding programme by Dr Whitney, Rose escaped with the help of Kane after she was impregnated by him, but despite Kane's desperate need to keep her close to him, she has eluded him . . . until now.  But does she feel the same passion for him that he feels for her?

Review:
I've been a massive fan of the GhostWalker series since I first started reading it and I really liked Kane when we met him in the last book so I was looking forward to his story.  I have to admit I found myself a bit disappointed with Ruthless Game though and don't think it managed to live up to my expectations.  There were a couple of points early on when I really wanted to slap Kane for his attitude to Rose.  When he starts complaining that surely even a pregnant woman should be able to walk a mile without getting out of breath I wanted her to push him of the edge of a cliff.  At this point Rose is eight months pregnant, has just been chased across rooftops, had to jump out of a moving car and they're now marching across the dessert trying to escape the bad guys - give the woman a break!  I know she's a GhostWalker with enhanced abilities but I'd say that was pretty impressive when according to him she looks "as big as a beach ball".  Charming huh?

I'll admit he grew on me once they found a hideout and you started to see how nervous he was about her pregnancy.  I laughed quite a lot when he told her just to stop her contractions and there were some very sweet moments between them when the baby was born.  I really enjoyed watching them bonding together as a family and it was good to see more of Kane's team working together to protect Rose and the baby.  What I didn't really enjoy was the sex scenes - there was far too much reference to leaking breast milk for my tastes and I had to wonder if someone who had only given birth a few weeks ago would really be up for being woken up several times a night because Kane was ready for some action.  Between Kane's demands and breast feeding the baby I don't see when Rose would have had time to sleep so it was quite a shock when she insists on starting training again so soon.

There were some very good action scenes that had me on the edge of my seat but there were a few times when things seemed a bit disjointed.  It felt a bit like the author tried to add too many different plot lines to the story, there were threats from so many different angles that the characters never had time to breathe.  I also felt that a certain letter from Dr Whitney was completely out of character and unbelievable but perhaps it'll prove to have been another one of his lies if a future book.  At times the story seemed to fast forward several weeks but I was never quite able to work out how much time had passed or figure out the age of the baby.

While we're on the subject of the baby I have to say how creepy I found it (sorry to say "it" but I don't want to give spoilers of whether it was a girl or a boy).  I knew that with GhostWalker parents the baby was going to have some interesting abilities but I think it was taken a bit too far considering it's only a few weeks old.  There was a scene that included 4 GhostWalker babies (Rose & Kane's baby, Lily & Ryland's baby and Jack & Briony's twins) that was uber freaky and made them appear far from human.  Where I was intrigued to find out more about the next generation of GhostWalkers now I think I'd rather wait until they at least hit toddler age before I see them again.

So I didn't love Ruthless Game but it wasn't a terrible book, I think I just have such high expectations for this series that it is easy to end up feeling disappointed.  I'm definitely looking forward to reading the next book Samurai Game which I'm hoping will be Javier's story.  I do think it is getting to the point that this series is ready to come to a close though, or at least we need to have the ongoing plot involving Whitney brought to some kind of resolution and move things in a different direction.