Q&A With Katherine Roberts & UK Giveaway of Sword of Light

To celebrate the release of her latest children's fantasy novel Sword of Light I'm delighted to have author Katherine Roberts here today to answer some of my questions.  Also, thanks to the lovely people at Templar I have 10 copies (yes, you read correctly TEN copies!) of the book to give away to some of my UK readers.  I've already read Sword of Light (my review will be posted later today) and it is such a fun read - definitely one I recommend for fantasy fans!

First let me share some information about the book: 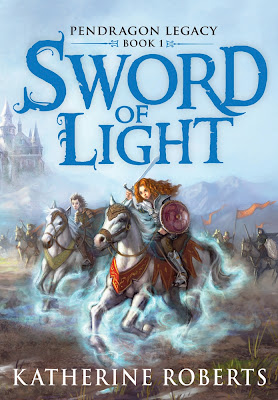 King Arthur is dead and the path to the throne lies open to his evil nephew, Mordred.  But there is one with a better claim . . .

Now I'd like to give a warm welcome to Katherine Roberts, thanks so much for visiting today Katherine! 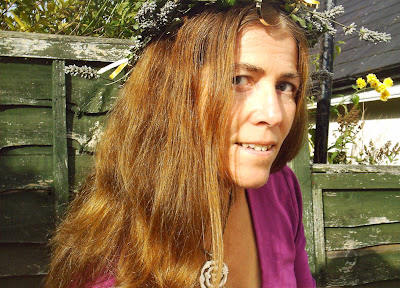 Katherine Roberts
What gave you the idea of writing a story based on the legend of King Arthur?

I’ve been a fan of Arthurian fiction since I first discovered Mary Stewart’s Merlin trilogy (The Crystal Cave, The Hollow Hills, The Last Enchantment) in the school library. For a while back in the 80’s it seemed nearly every fantasy author was writing something Arthurian, and I read my way through most of them, so I suppose it was inevitable that I would eventually write something Arthurian myself after I became an author.

I didn’t want to retell the old stories, though, so I avoided having Arthur or Merlin as my main character and instead invented a warrior princess – King Arthur’s daughter Rhianna Pendragon – who could pick up the story where the legends left off, the day after Arthur died in battle at the hands of his evil nephew Mordred…

Can you describe Sword of Light in 5 words?

Ah, only five words! That sounds a bit like a competition I once entered to describe “The Lord of the Rings” in 50 words… but I won that competition, so let’s have a go…

(Which one works for you?)

Can you tell us a bit more about how many books you have planned for the series?

There are four books in the Pendragon Legacy series altogether, so it is a fantasy quartet rather than the more usual trilogy. This is because I based the series around the four magical talismans that occur in Celtic myth:

Book 1: Sword of Light (Arthur’s sword, Excalibur)
Book 2: Lance of Truth (Arthur’s lance Ron, based on the spear used to wound Jesus on the cross)
Book 3: Crown of Dreams (which hides a magic stone/jewel sometimes called the Lia Fail)
Book 4: Grail of Stars (the Cauldron of Plenty, or the Holy Grail in Christian legend).

Rhianna needs to find all four of these magical “Lights” before she can bring her father back from the dead to sit on the throne of Camelot once again… but King Arthur never actually managed to bring the Grail to Camelot, so can a damsel succeed where Arthur’s brave knights failed? (You’ll have to wait until Book 4 to find out!)

Do you have the whole series plotted out or do you prefer to see where the story takes you as you're writing it?

I had a very basic plan (about a paragraph for each book) before I began. But I prefer to leave it up to my characters to work out the details, and they are getting more wilful as the series progresses. So if they decide to change the ending when I get as far as Book 4, I might have a major battle on my hands!

How long did it take you to write Sword of Light? Have you finished writing Lance of Truth?

If you look at the publication date of my last book (“I am the Great Horse” about Alexander the Great’s warhorse Bucephalas), you’ll see that one was published back in 2007. So I expect everyone thinks I’ve taken five long years to write “Sword of Light”… but that’s not quite true!

I suppose it took me about a year to come up with the concept for the Pendragon series, develop the characters, write the first book and find a publisher for it. It took me about another nine months to write “Lance of Truth” (which is finished, yes, and with my editor now – it’s due out at the end of this year). For the remaining three years I was writing a novel about Genghis Khan, so my published books are out of order now. But that often happens. Fashions come and go, and King Arthur is obviously more popular than Genghis Khan at the moment.

Who is your favourite character? Where they also the easiest character to write?

I’ll have to say Rhianna, because I wish I had a telepathic fairy horse like Alba and a sword like Excalibur. But I have a soft spot for her friend Prince Elphin with the violet eyes. Cai and Arianrhod are quite interesting, too, though their characters come out a bit more in later books.

But I have to admit my villain, Mordred, was the easiest character to write! In fact I often find it easier to write about villains than heroes/heroines. I was discussing this with my editor the other day, and she says it’s because you always know exactly what the villain wants – normally to kill everyone and destroy everything good! Mordred wants the throne of Camelot, and he’ll stop at nothing to get it…

Rhianna, Elphin, Cai and Arianrhod
******************************
Katherine Roberts won the Branford Boase Award for her first children’s novel Song Quest (reissued this month in paperback by Catnip Books). She is the author of the Seven Fabulous Wonders series, translated into 11 languages worldwide and now available as ebooks for Kindle, and the Alexander the Great novel “I am the Great Horse. Her new children’s fantasy series about King Arthur’s daughter Rhianna Pendragon is published by Templar with the first book SWORD OF LIGHT now available in hardcover.

Now how would you like the chance to win a copy of Sword of Light?