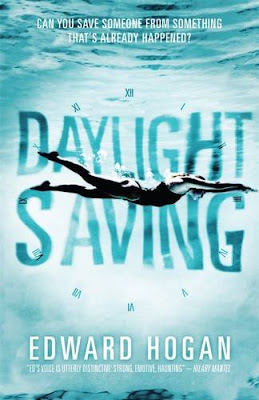 When Daniel Lever accompanies his dad to the Leisure World Holiday Complex, his expectations are low.  But then he sees a mysterious girl by the fake lake and everything changes.  Lexi is funny and smart, but why does she have wounds that get worse each time they meet?  And is her watch really going backwards?

As the end of British Summer Time approaches, Daniel has to act quickly.  Their souls depend on it.


Review:
When Daniel is taken to Leisure World by his father it really is his worst nightmare rather than an ideal fun family holiday.  Overweight and unfit Daniel isn't a fan of sports and isn't looking forward to days full of tennis, cycling and swimming.  After meeting Lexi things start to change, he is drawn to this mysterious girl and wants to uncover her secrets.  What caused her injuries and why do they get worse every time he sees her?  Is there any way he can protect her from something that has already happened?

On the surface Daylight Saving is a ghost story but underneath that Edward Hogan explores issues of family connections, alcholism and self confidence.  Daniel is a character who is easy to relate to, he isn't your typical handsome hero but he has an inner strength that shines through as the story progresses.  We get to see him grow from an unsure and shy teenager into a brave and confident young man and it was a pleasure to see the changes in him.  Although Daniel's main goal is to try and help Lexi he learns a lot about himself and this helps him come to terms with the separation of his parents.  His relationship with his father also changes a great deal as events bring them closer together than they've been in a long time.

I really enjoyed the way the author has made use of the extra hour given at the end of British Summer Time as such an important part of the story.  I don't think I've seen time used in quite the same way before and it added an interesting dimension to the story.  You are aware that this hour is going to have a big impact on both Daniel and Lexi but you have no idea how things will work out.  I also really liked the Leisure World setting, I've never been to Centre Parcs but it had a similar feel to family holidays spent at Butlins which brought back some fun memories.  The setting is like an extra character in the story and nothing about it is quite what it first seems, instead of being a family friendly location it has quite a sinister feel to it.

The story moves along at a good pace making Daylight Saving a fast and fun read.  There are plenty of twists to the story and it takes you in a direction you won't be expecting.  An enjoyable YA debut from Edward Hogan that has made me curious about his adult books and has me looking forward to seeing what he comes up with next.

Other reviews of this book:
YA Yeah Yeah
If you have reviewed this book on your blog please leave a link to your review in the comments & I'll add the link here.