Review: If I Die - Rachel Vincent 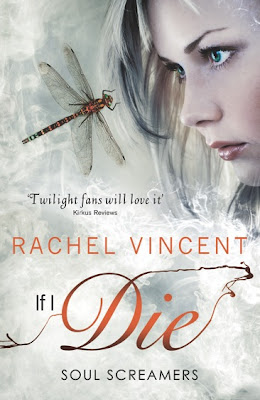 Kaylee can see death coming.
Now she must face her own.

As a teen banshee, Kaylee's blood-curdling screams are a death knell for others.  Yet she never expected to see her own name at the top of a reaper's list.

Scheduled to die within days, Kaylee knows her magic can't change her fate.  Worse, on top of worrying about her own demise, she needs to save mortal best friend Emma from the clutches of a deadly Netherworld creature.

As Kaylee's time on earth slips away, troubled banshee boyfriend Nash and his reaper brother Tod refuse to give up on Kaylee.  They're ready to unearth murky family secrets to give her a last chance at life, as their fight to save Kaylee becomes a battle for her love.

What would you do if you discovered you had just days to live?  That is the decision Kaylee has to face in If I Die after Tod spots her name on the reaper list.  Somehow things like school and work don't seem quite so important anymore.  Her family and friends are desperate to try and find a way to save her but Kaylee is trying to accept her fate and wants to make sure that they will all be OK when she is gone.  She is particularly concerned about Emma who she fears is being targeted by a new teacher who isn't quite what he appears to be.  As Kaylee once again puts herself in danger for the sake of others can those who love her find a way to protect her?

This was already one of my all time favourite YA series but If I Die was by far the best book yet.  I really don't know how Rachel Vincent does it but each new instalment just gets better and better and I can't wait to get my hands on Before I Wake!  If I Die really takes you on an emotional roller coaster and I had absolutely no idea how things would play out at the end, I'm just going to assure you that it surpassed by expectations by a long shot.

I already loved Kaylee but she proves just how strong she is this time around.  She doesn't want to die but she knows that she has had a second chance and she doesn't see any way around what is going to happen.  She feels that she has to accept what is going to happen and she wants to make sure that her family and friends will be alright when she has gone.  There were some heartbreaking scenes between her and her father and I was really impressed with the dignity Kaylee shows in the face of everyone else's denial over the situation.  Always one to put others above herself it isn't a surprise that Kaylee ends up spending what could be her last few days trying to protect others, especially her best friend Emma, from a supernatural threat.

I've made no secret of the fact that I've always been on team Nash, while I've been liking Tod more and more with each book I'm quite loyal and once I've picked a team I very rarely change my mind.  Having said that I think I might just have defected to team Tod now which is something I really didn't expect to say!  I still love Nash but his actions over the last few books have shocked me and if anything he did something even worse this time around.  I really hope he manages to sort himself out but I don't see how Kaylee could ever be able to trust him again after all the things that have happened.  Tod on the other hand has turned into someone who is always there for Kaylee, he let her down very early on in the series but since then has become a source of strength for her and has really proved himself.

If I Die is action packed and full of twists that will have you gasping in shock, alternating between rage and joy and probably shedding more than a few tears along the way.  The book really was impossible to put down so make sure you clear your diary before you start reading - there is no way you'll want to stop!  I can't recommend this book (or this series) highly enough and I can't wait to see where Rachel Vincent takes us next, especially after the latest developments!