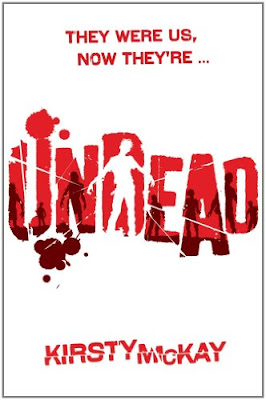 It was just another school trip - stuck on a bus with a bunch of freaks ...

When their ski-coach pulls up at a roadside cafe, everyone gets off except for newbie Bobby and class rebel, Smitty.

They're hardly the best of friends, but that all changes when through the falling snow, they see the others coming back.

Something has happened to them. Something bad. Soon only a pair of double-doors stands between those on the bus and the Undead outside.

Review:
Bobby is the new girl at school and was forced into going on the pre-term skiing trip as a way of getting to know the rest of her class. She hasn't found it easy to fit in though and when they stop for lunch on the journey home she decides to remain on the coach rather than be forced to sit with her class mates. It turns out to be the best decision Bobby could have made though, especially when class mean girl Alice arrives back in hysterics saying that everyone in the restaurant is dead and that one of the teachers just tried to eat her!

I don't read a lot of horror but I'd heard enough good things about Undead that I wanted to give it a try. I'm so glad I did pick it up because Kirsty McKay's debut turned out to be a book I couldn't put down and I read it in one sitting. The story has everything you could hope for in a zombie novel - tough protagonists who are going to face extremely difficult situations if they want to survive, scary zombies and plenty of gore. The black humour was fantastic and I was alternating between laughing out loud and wanting to hide behind a cushion while I was reading the story.

Our heroine Bobby is one tough lead, she is smart, brave and funny and I liked her from the beginning. She is the kind of character who is prepared to make a decision and stick with it and she doesn't sit around waiting for someone to come along and rescue her, she is going to do what she needs to to rescue herself and help her new friends / allies too. Another character I loved was Smitty, introduced as the school bad boy the only reason he was still on the coach was punishment for his bad behaviour but he is actually a really nice guy when he lets it show. He is another character who is willing to fight to survive and without him and Bobby I can't imagine that Alice would have lived through more than the first couple of chapters. I loved the banter between Bobby and Smitty, that was a definite highlight of the book for me.

I'm not sure if Undead is the first book in a series but there is definitely room for Kirsty McKay to write a sequel and if she does I'll be first in the queue to pick up a copy. Even if she writes something completely different it will be a book I'm going to buy and if the humour is anything like it was in this one I already know I'm going to love it. This is a great debut and one I'd definitely recommend to horror and zombie fans.

Source: Received from Chicken House in exchange for an honest review