Today I have another guest review for you from my very good friend Poppy, I knew I'd be able to convince her to write more reviews for me! Thanks for a fab guest review Poppy :o) 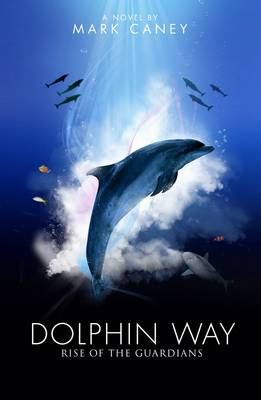 Dolphin culture evolved over millions of years so they could remain perfectly attuned with their world, ocean.  Unlike man, they have created an almost utopian society without feeling the need to manipulate their environment, collect possessions or wage war.  But the growing pressure of man's activities become intolerable and in frustration one faction seeks an aggressive new path, making a shocking departure from the way - the ancient philosophy that has guided them so well through the millennia.

Sky, a male dolphin close to becoming an Initiate in The Way, unwillingly finds himself caught up in the violent consequences.  To save the lives of his closest friends he will have to risk the worst punishment his clan can inflict and must decide between the two females who challenge everything he believes in.

Poppy's Review:
I absolutely loved Dolphin Way: Rise of the Guardians and read it in three days because I wanted to immerse myself in the fabulous world which Mark Caney created. I couldn’t wait to find out where the story would take me and the chapters were short, which only made it more tempting to just read another one before putting the book down.

Mark Caney has beautifully created a dolphin culture where they have traditions, rituals, beliefs and hierarchy developed from a history spanning many years over the evolution of the Earth. The dolphins are aware of The Walkers [humans] and have made observations leading to theories about them, including that they may be at least in part to blame for lack of food in the ocean and changes in the environment. It was thought provoking to see an imaginatively presented dolphin philosophy, their view of the world and structure of their society. I really liked the fact that Dolphin Way did not simply involve dolphins living in a society replicated from ours.

The story centres on the Dune Coast Clan and in particular a young dolphin called Touches the Sky. With concerns about how the environmental changes may affect the dolphin way of life, there are rumours of a clan called The Guardians formed in opposition of The Way, wanting to change the laws of the ocean in order to ensure their survival.

Sky is a Novice [studying The Way] and he and his friends are each learning the skills and knowledge required for their roles in society as they reach maturity, including helping to teach the younger generation. Sky notices that something seems wrong in the ocean, but tries to focus on his new responsibilities and prepare for his future in the clan. Soon however, he is unable to ignore the feeling that things are not as they should be and may be about to change forever.

Dolphin Way has left me wanting more. I want to re-enter the ocean and see what is happening with the Dune Coast and other clans and species. I wish there were a whole series which I could continue to read now, but alas this is the first one. My disappointment at having finished the book was slightly alleviated however, by the words on the last page telling me that there will be a second part of Dolphin Way: Captured. Yeay…I can’t wait.