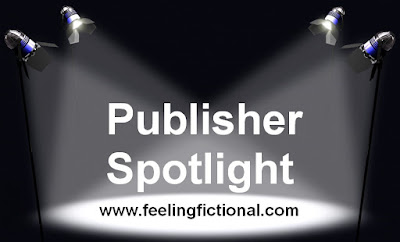 I thought it would be fun to start spotlighting new releases that different publishers have coming up over the next few months for us to look forward to.  I'm constantly looking for new books to add to my wish list and thought it would be a nice way of spreading the bookish love with other bloggers.  I'm not sure how regular the posts will be yet but I have quite a few lined up already and we'll see how things go over the next few months.  So in the spotlight today we have . . .

RHCB always manage to impress me with the variety of titles they print, they have a fantastic range of paranormal & fantasy novels (which everyone should know by now are my favourite kind of reads!) but they are also the publisher most likely to tempt me out of my comfort zone.  I'm really excited about the books the have coming in 2012 and can't wait to start reading them all!  You can find out more at the RHCB website.


2nd of February 2012:
The first book I'm going to mention is one that I've been looking forward to since January this year so I can't tell you how desperate I am to get my hands on it!  I loved Karen Mahoney's debut novel The Iron Witch (read my review here) so The Wood Queen is at the top of my wish list.  I can't wait to catch up with Donna, Nav and Xan *swoons at the hottness that is Xan*  Check out Karen Mahoney's website for more information. 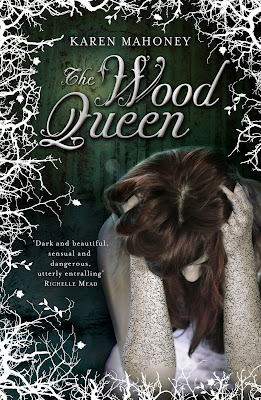 To keep her best friend, Navin, from being killed at the hands of vicious wood elves, Donna Underwood stole the elixir of life. Now she’s facing an alchemist tribunal while her mother lies dying, succumbing to the elven curse that shattered her mind. In desperation, Donna seeks an audience with Aliette, the fierce and manipulative Wood Queen, who offers a deal: if Donna can use her strange and burgeoning powers to help the wood elves, Aliette will free her mother from the curse.

Along with Navin and Xan, the half-fey guy she’s falling for, Donna struggles to unlock the secrets of her iron tattoos in time to save her mother’s life. But some secrets are better left untold…

Next we have the fourth book in Lauren Kate's Fallen series Fallen In Love.  I really liked the first two books in this series Fallen & Torment (click on the links to read my reviews) but have to confess I haven't had time to read the third book Passion yet.  This book will actually contain 4 different stories, each focusing on different characters from the series and I'm looking forward to finding out more about some of the side characters.  I really must bump Passion up the to read pile so I can read Fallen In Love when it comes out!  Visit Lauren Kate's website for more information on the series. 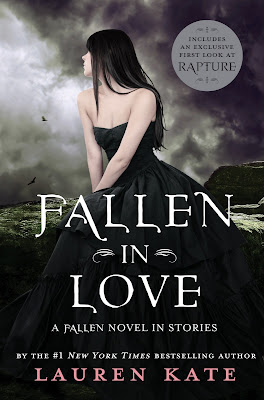 Get ready to Fall . . . One acclaimed series; four extraordinary new stories - from the international bestselling author of Fallen

Unexpected. Unrequited. Forbidden. Eternal. Everyone has their own love story.

And in a twist of fate, four extraordinary love stories combine over the course of a romantic Valentine's Day in Medieval England. Miles and Shelby find love where they least expect it. Roland learns a painful lesson about finding-and losing love. Arianne pays the price for a love so fierce it burns. And for the first -and last- time, Daniel and Luce will spend a night together like none other.

Lauren Kate's FALLEN IN LOVE is filled with love stories . . . the ones everyone has been waiting for.

Next we have a new novel from Margo Lanagan called The Brides of Rollrock Island (this was going to be released with the title Sea Hearts but has had a last minute name change).  I haven't read anything by this author before but I'm really curious about this one - it obviously has a paranormal angle which appeals to be immediately but I'm curious to find out what kind of supernatural creatures the wives actually are!  Find out more at Margo Lanagan's website. 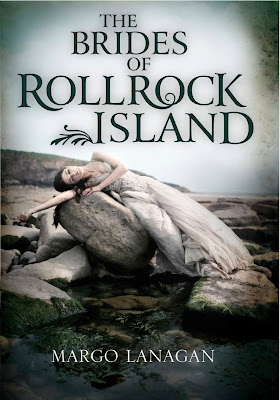 A mesmerizing tale of sea magic from the author of Tender Morsels.

Rollrock island is a lonely rock of gulls and waves, blunt fishermen and their homely wives. Life is hard for the families who must wring a poor living from the stormy seas. But Rollrock is also a place of magic - the scary, salty-real sort of magic that changes lives forever. Down on the windswept beach, where the seals lie in herds, the outcast sea witch Misskaella casts her spells - and brings forth girls from the sea - girls with long, pale limbs and faces of haunting innocence and loveliness - the most enchantingly lovely girls the fishermen of Rollrock have ever seen.

But magic always has its price. A fisherman may have and hold a sea bride, and tell himself that he is her master. But from his first look into those wide, questioning, liquid eyes, he will be just as transformed as she is. He will be equally ensnared. And in the end the witch will always have her payment.

Margo Lanagan has written an extraordinary tale of desire, despair and transformation. In devastatingly beautiful prose, she reveals unforgettable characters capable of unspeakable cruelty - and deep unspoken love. After reading about the Rollrock fishermen and their sea brides, the world will not seem the same. 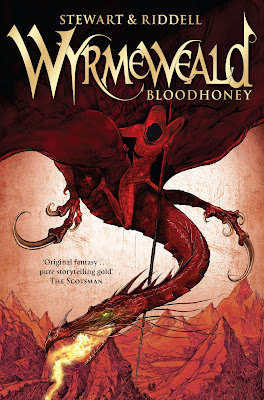 Fullwinter in the weald - a season of almost unsurvivable cold for anyone foolish enough to venture outside. Even wyrmes die, frozen in the icy wasteland, or falling lifeless from the skies as the host heads west to escape the advance of the two-hides: man...

Huddled in a winter den, Micah is thankful to cragclimber Eli Halfwinter for providing him and kingirl Thrace with shelter, while Thrace aches to leave and fly through the skies on her whitewyrme once more. But sniffing out their whereabouts, fuelled by the invigorating liquor known as bloodhoney, is a brutal assassin, seeking vengeance. And worse is to come when they stumble upon a bizarre community headed by a charismatic stone prophet - Deephome...


1st of March 2012:
I first found out about the next book at the RHCB Blogger's Brunch in July and have been looking forward to reading it ever since then.  I've not come across any other YA books set in the 1920's and think Vixen (the first book in the Flappers trilogy) by Jillian Larkin sounds fantastic.  You can find out more about Jillian Larkin at her Goodreads author page. 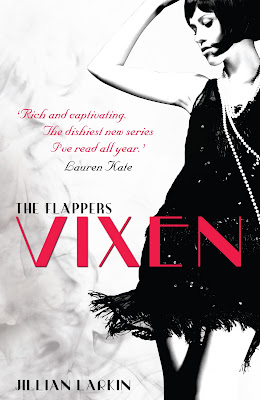 The roaring twenties where anything goes . . . The first in a sparkling new trilogy full of romance, dancing and secrecy.

Three girls. One city. Who will be the last flapper standing?

It's Chicago 1924. Born into American high society, Gloria is the girl who has it all. Living the debutante dream along with her best friend Lorraine, Gloria is just a trip down the aisle away from her future life as Mrs Sebastian Grey. But surely there's time for a little partying before she settles down?


This next book is one that I think is going to break my heart, in fact I've been warned to keep a box of tissues to hand when I read it!  Wonder is a debut novel by R.J. Palacio and it looks like it will be an amazing book (this is what I meant about RHCB making me want to step outside my comfort zone!).  You can find out more at R.J. Palacio's website. 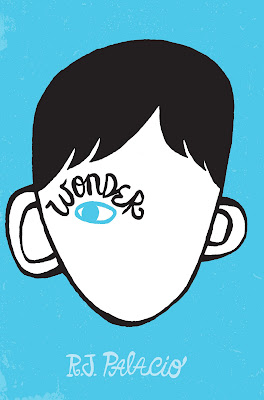 The most poignant, moving and heart-warming tale you will read this year; a book to devour in one sitting and press urgently into the hands of your friends and family. A true wonder of a book.

WONDER is the funny, sweet and incredibly moving story of Auggie Pullman. Born with a terrible facial deformity, this shy, bright ten-year-old has been home-schooled by his parents for his whole life, in an attempt to protect him from the stares and cruelty of the outside world. Now, for the first time, Auggie is being sent to a real school - and he's dreading it. The thing is, Auggie's just an ordinary kid, with an extraordinary face. But can he convince his new classmates that he's just like them, underneath it all?


April 2012
Another book we heard about at the RHCB bloggers brunch was Starters by Lissa Price, we had seen a sneak preview of the cover but had all been sworn to secrecy and asked not to mention the book in our write ups.  This debut novel is the first book in a new dystopian trilogy and will be available on the 1st of April.  This is one I'm really looking forward to reading and don't you just love this cover?!  For more information visit Lissa Price's website. 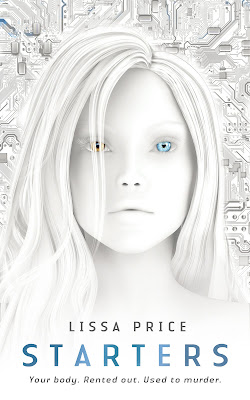 Matched meets The Hunger Games - with a touch of Total Recall! A gripping dystopian thriller by debut author, Lissa Price.

Screenwriter Lissa Price's STARTERS is the first in a futuristic thriller series featuring a society where youth is coveted at an impossible price, and one girls' ability to bring it all crumbling down.


Next we have a book that will definitely appeal to the boys (but there is no reason that us girls won't love it too!), Reloaded is the second book in Chris Ryan's Agent 21 series and will be published on the 5th of April.  Chris spent 10 years serving in the SAS so has plenty of real life experiences to draw from in his writing.  You can find out more about Chris Ryan at his website. 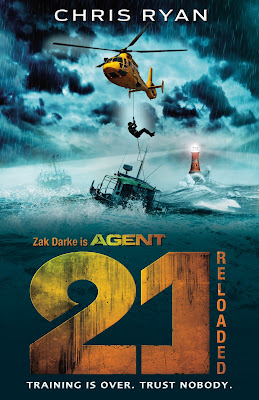 Some authors just write about it. Chris Ryan has been there, done it and lived to tell the tale. This is the second in the new action-thriller Agent 21 series by the real-life SAS hero.

In the year since Zak Darke was approached by a shadowy government agency to become Agent 21, his world has changed completely. But there is no time to reflect on this - the undercover operations go on.

May 2012:
The 5th of May sees the release of the second book in the Mortal Kiss series - Fool's Silver by Alice Moss.  This is a series I've been wanting to start reading for ages so I must pick up Mortal Kiss before this comes out.  You can find out more at Alice Moss' author page on Goodreads. 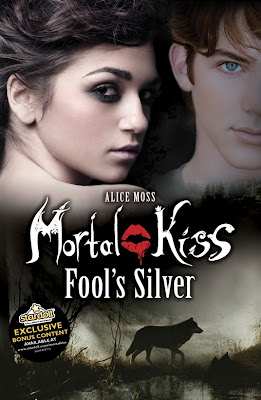 This sensational story - first serialised on international hit teen website Stardoll - is now a novel that is set to take the world by storm!

Could you choose between the ones you love . . . ?

A gorgeous boyfriend and a long summer in Winter Mill to look forward to - things are good for Faye McCarron.

Then her friend Lucas disappears without a trace. But nobody seems to care - until two strangers arrive in town . . .

The last book I'm going to mention today is Seraphina by Rachel Hartman that will be published on the 10th of May.  This looks like a brilliant fantasy and it's one I'm really excited about.  You can find out more at Rachel Hartman's website. 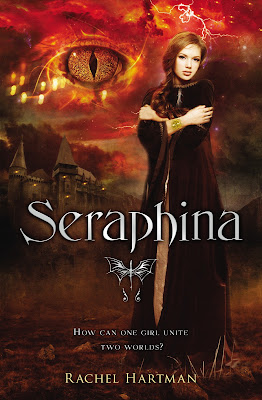 The kingdom of Goredd is populated by humans and by dragons who fold themselves into a human form. Though they live alongside each other, the peace between them is uneasy.

But when a member of the royal family is murdered, and the crime appears to have been committed by a dragon the peace and treaty between both worlds is seriously threatened . . .

Into this comes Seraphina, a gifted musician who joins the royal court as the assistant to the court composer. She is soon drawn into the murder investigation and, as she uncovers hints of a sinister plot to destroy the peace in Goredd for good, finds herself caught desperately in the middle of the tension.

For Seraphina hides a secret - the secret behind her musical gift - and if she is found out, her life is in serious danger . . .

So what do you think of the books that RHCB have coming out early next year?  Which ones are you most excited about?
at 18:00